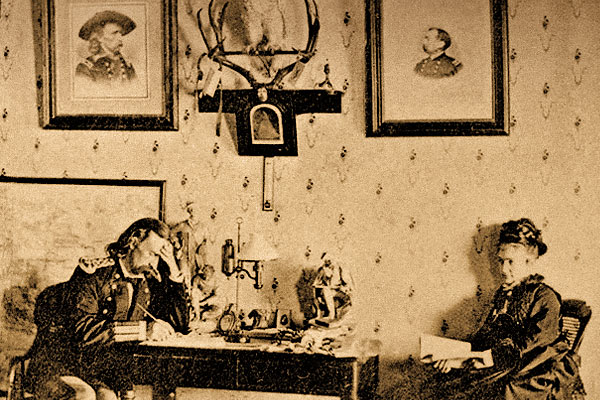 Besides the reconstructed Custer House (with its guided tours by 1875-era re-enactor soldiers and maids) and its seven other military reconstructions, the state park includes a Mandan village, occupied from 1575-1781, with six earthlodges filled with exhibits. An excellent visitors center provides the best display in the world on the history of the Mandan people.

2. Check out the budget-friendly (admission is free!) North Dakota Heritage Center, offering up the “official” state history, on the state capitol grounds. The museum is currently undergoing a $52 million expansion.

4. Peacock Alley is a historic watering hole in downtown Bismarck. Once the Patterson Hotel, it has  been the bipartisan meeting  place of politicians and lobbyists for a century.

5. Fiesta Villa, across from Peacock Alley and housed in Bismarck’s historic railroad depot, is known for its margaritas; get your Gold Card punched and every 10th one is free. But take your time. One is nice, two is still nice, three … no, don’t do it. Take it from someone who has.

6. Set in lovely Sertoma Park, Dakota Zoo is home to more than 125 species, and it offers exhibits of the animals seen by Lewis and Clark when they visited in 1804.

7. Take a cruise on the mighty Missouri River aboard the Lewis and Clark Riverboat, from Memorial Day to Labor Day. The 110-passenger sidewheeler rides the river known to Lewis and Clark, Custer, Sitting Bull, Sacagawea and other legends of American history.

8. Learn how railroads built the region through exhibits at the North Dakota State Railroad Museum (open Memorial Day through Labor Day). Train buffs will enjoy the railroad cars, the 1880s depot and the model trains.

9. Drive Highway 1804 to the Lewis and Clark Interpretive Center and Fort Mandan,  38 miles north of Bismarck in Washburn. The fort is a full-scale replica of the Lewis and Clark expedition quarters during the winter of 1804-05. Excellent tour guides explain the whole thing. The interpretive center is a remarkable museum with both permanent and rotating exhibits about the expedition and the friendly people the explorers encountered more than 200 years ago.

10. North Dakota is cattle country, and beef is presented nowhere better than at the new Harvest Brazilian Grill on Mandan’s Main Street. Keep putting tender, tasty thin slices of sirloin or rib eye on your plate until you surrender.

Tracy Potter, executive director of the Fort Abraham Lincoln Foundation and a former North Dakota senator, has BA and MA degrees in history from the University of North Dakota.