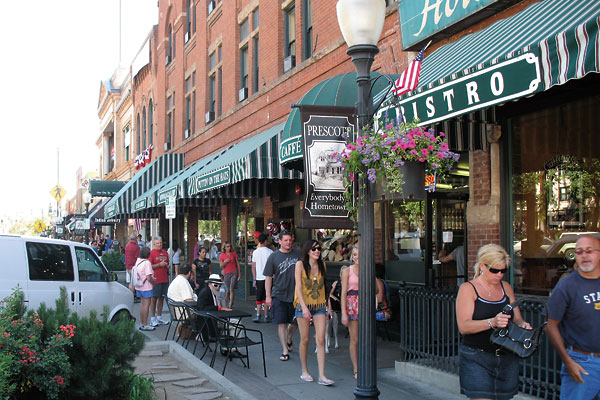 Touring our #1 Town of the year, Prescott, Arizona.

1. Hit the 1877 Palace Saloon on legendary Whiskey Row and belly up to the bar where Buckey O’Neill and his Troop A of the Rough Riders hoisted a final toast before heading to Cuba. It’s also where the classic donnybrook was filmed for Steve McQueen’s Junior Bonner.

2. Head down the street for some of the best ribs in Arizona at Pearl’s Place Cafe, where the sides are almost as good as the pulled pork.

3. If it’s a top microbrew you’re searching for, Prescott Brewing Company on Gurley Street was recently voted number one in the Grand Canyon State. Plus, it has one of the best lists of single malt Scotch whiskeys from Nogales to the Grand Canyon.

4. Don’t miss the Courthouse Plaza just across the street. During the Christmas season, the plaza is especially magical—it glitters with lights from every tree and offers an old-time atmosphere Dickens would have loved.

5. Around the corner from the plaza, the Antique Row on Cortez Street features collectibles ranging from Victorian finery to Wild West gear.

6. Looking for a place to stay that harkens back to the classic era of steam locomotives and Harvey Girls?  Check into the Hassayampa Inn on Gurley.

7. After settling in at the Hassayampa, make sure you visit the Elks Opera House, which was lovingly restored to its Edwardian splendor. Just as it was in its heyday, the theatre is the centerpiece of Prescott.

8. Take a walking tour of stately Victorian homes or follow the Arizona Women’s Heritage Trail. You can find out how to enjoy these great time travels at the local Chamber of Commerce housed in the old fire station south of Courthouse Plaza.

9. No visit would be complete without experiencing Sharlot Hall Museum, just two blocks west of the courthouse. Since 1928, this nearly four-acre museum and living history village has brought the adventure of Arizona’s Central Highlands to life. And if it’s the military past you’re searching for, make sure you drive a few miles to Fort Whipple, a Sharlot Hall Museum branch operated in conjunction with the local Veterans Affairs office.

10. Once you complete your rounds, you’ll no doubt be hungry. Relax at Iron Springs Cafe, just a brief drive northwest of downtown at 1501 W. Iron Springs Road. The menu is out of the ordinary for a small town, and you won’t be disappointed!

Click on the photo to see the map of the places you need to visit while in Prescott, Arizona.

John Langellier is the director of Sharlot Hall Museum in Prescott, Arizona. He received his PhD in history from Kansas State University.