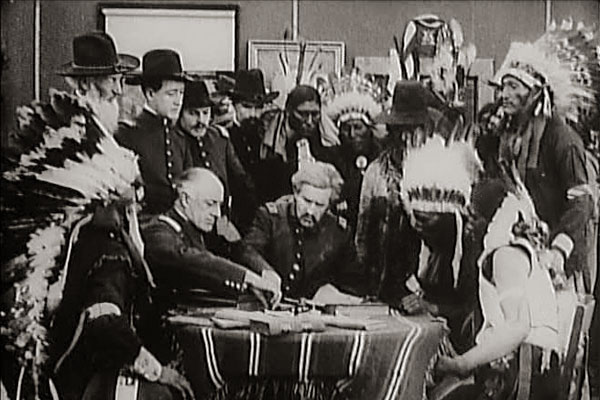 “In the name of the eternal fitness of things, has not this cowboy-Indian obsession gone far enough?” reported Moving Picture World in December 1911.

The real problem wasn’t too many Westerns, but that the ones made between 1903, when The Great Train Robbery came out, and 1912 all stunk. Whites played Indians, phony cowboys could barely ride their horses and most films were shot in New Jersey.

Thomas H. Ince had a better idea. In 1911, he rented the Miller Bros. 101 Ranch Real Wild West Show. He took the show’s cowboys, buffalo and Oglala Sioux to 28 leased square miles of Santa Monica and the Pacific Palisades just outside Los Angeles. This area became known as “Inceville.”

Ince reinvented the Western; instead of being phony, it could be realistic and believable. The first great example of this was his 42-minute film The Invaders, with the dramatically sophisticated story of whites signing a treaty with the Indians, then breaking it. The outraged Sioux enlist the help of the Cheyenne, then go on the warpath and attack soldiers in a fort. After a prolonged battle, when it looks like the soldiers might lose, for the first time ever in a movie, the cavalry rides to the rescue and saves them. Thus a new cliché was born.

Although the film has no production credits, The Invaders was probably codirected by the film’s star Francis Ford, older brother to the soon-to-be-famous John Ford. Francis brought John to California a few years later to work on these Ince Westerns.

Twelve years later, in 1924, Ince died of unexplained gunshot wounds on William Randolph Hearst’s yacht. The rumor was that Hearst thought his mistress, movie star Marion Davies, was having an affair with Charlie Chaplin, presumably shot at Chaplin in the dark and it turned out to be Ince. Ince’s body was immediately cremated, and no charges were ever brought against anyone.

The Invaders is available in a terrific DVD collection, More Treasures from the American Film Archives, 1894-1931, put out by the National Film Preservation Foundation.