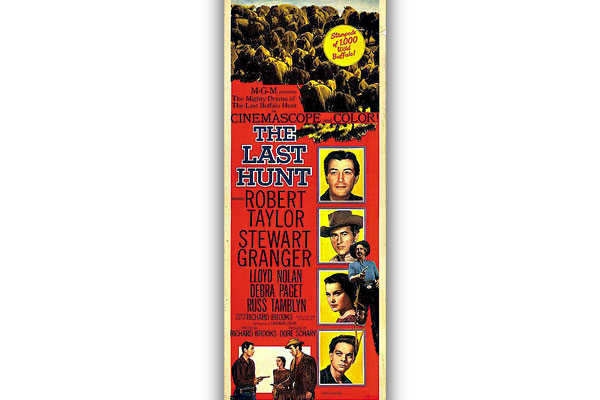 We are informed at the beginning of The Last Hunt that all of the depictions of buffalo hunting in the film were photographed at the annual “thinning” of the herds in South Dakota.

What you immediately realize from watching these “real” takes is that shooting buffalo is easier than shooting fish in a barrel—they’re bigger targets and don’t seem to mind that their fellow bison are dropping dead right next to them.  Since they don’t run away, if you have enough ammo, you can just sit there and shoot an entire herd.

That’s exactly what Robert Taylor’s buffalo hunter loves most, killing a herd in a day. His longtime hunting partner (Stewart Granger), however, is sick of killing. Add to this situation Taylor’s character regularly mistreating a cute Indian squaw played by Debra Paget, whom Granger’s character likes, and you’ve got a strong, interesting, volatile drama.

The Last Hunt was written and directed by Richard Brooks, coming right off his smash success the year before, Blackboard Jungle (with the first Rock ’n’ Roll hit song, “Rock Around the Clock”). Being the hot young director in Hollywood, Brooks naturally decided he had to make a serious Western about buffalo hunting.

Okay, now get this.  Stewart Granger, whose real name was James Stewart, was married to actress Jean Simmons (Spartacus), who would divorce him in a few years and marry Richard Brooks.

Granger’s love interest was played by Debra Paget, who made a career out of portraying “exotic types” and Indian squaws in several films, including Broken Arrow, where she played opposite the real James Stewart. The same year she acted in The Last Hunt she was also in The Ten Commandments and in Love Me Tender with Elvis.