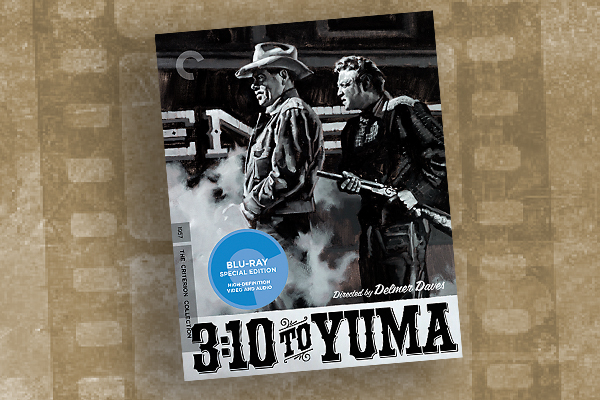 In 1956, Delmer Daves set to work with Halsted Welles (The Hanging Tree) to adapt the late Elmore Leonard’s short story “Three-Ten to Yuma” for the screen. Published in Dime Western Magazine in 1953, the story was one of Leonard’s first sales to the movies, and it couldn’t have been in more creative hands.

Daves had been looking westward for most of the decade, starting with the enormous accomplishment of Broken Arrow in 1950. What Daves saw in Leonard’s story was the framework for a Suspense Western, as outlaw Ben Wade plays mind games with the simple farmer who is keeping Wade prisoner until he can put him on the train to the prison in Yuma, Arizona Territory. Working with Daves, Welles opened up Leonard’s story through his script, bringing in family issues and fleshing out the townsfolk who are potential targets for Wade’s gang.

3:10 to Yuma is a model of suspense filmmaking, showing Daves at the top of his form. The performances are uniformly excellent, especially those by Henry Jones, as the town drunk who tries to help, and Felicia Farr, as the girl who Wade beds before being captured. Glenn Ford’s Wade is charming, easygoing and cold-blooded, assuming that Van Heflin’s broke rancher poses no real threat. Their interplay is realistic and fierce as one man pushes the other, and death remains just a trigger pull away.

On the Criterion Blu-ray, Charles Lawton Jr.’s black-and-white images pull you into the action. Although the collection does not offer a commentary track, it does include new interviews with Leonard and with Peter Ford, who talks about his dad’s multiple films with Daves, including Jubal, which Criterion has also released in a special edition.

Daves made other successes, like A Summer Place, but his version of 3:10 to Yuma is a quiet masterpiece, in which he drew from all he had learned from his work of the previous 20 years. By introducing the original film to a new audience, Criterion is helping Daves get his just appreciation.