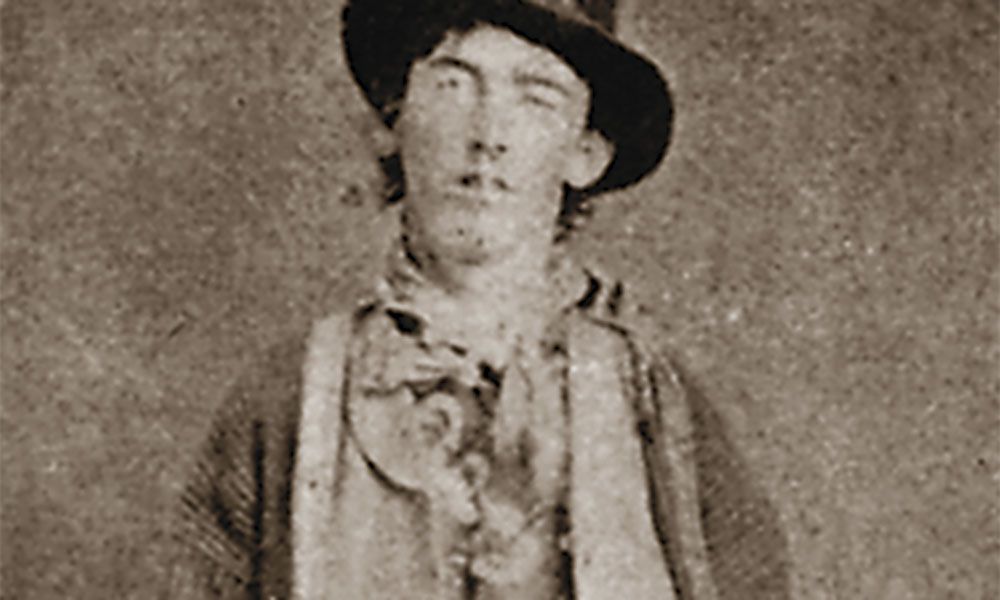 I have dedicated a good part of my life to seeking the truth about all the Old West characters, places and incidents covered in the pages of True West. Next year will mark my 20th anniversary as an owner and editor.

With a wonderful team behind me, and intelligent fans who support our mission to preserve the history of the American West, the quest has been satisfying and, by turns, frustrating. No one can ever get the history completely correct, and nothing changes more than the past.

For instance, everyone used to believe Billy the Kid was left-handed, based on the only known image of him, showing his holstered pistol on his left hip.

Articles were written to back up this belief. Psychologists claimed the Kid’s southpaw contributed to his delinquent behavior, which inspired the 1958 Western The Left Handed Gun.

Oops. Scratch all of the above.

The magazine does always strive for accuracy, a complicated task made easier thanks to the dedicated researchers and historians who work with us to share tales of the frontier West. A pal of mine, Arizona attorney William C. Porter, admires not only this aim to present the truth, but also how all of us have a good time fulfilling it.

We do try to keep the history fun and entertaining, as well as expansive and eye-opening. Yet just like the clashes faced by Joe “Hosstail” Small, who launched this publication in 1953, our team struggles with those battles we can’t seem to win.

The constant fight for historical accuracy was best described by another lawyer, and a Civil War veteran, Robert Green Ingersoll: “The grandest ambition that can enter the soul is to know the truth.”

As the magazine reaches the end of another milestone, its 65th anniversary, our True West family not only aims to present the best and most factual stories of the Old West, but also looks ahead to how we can keep this history relevant for a worldwide audience, in all the ways our readers prefer to consume content.

We hope you, and the next generation, stick around for the next 65 years. 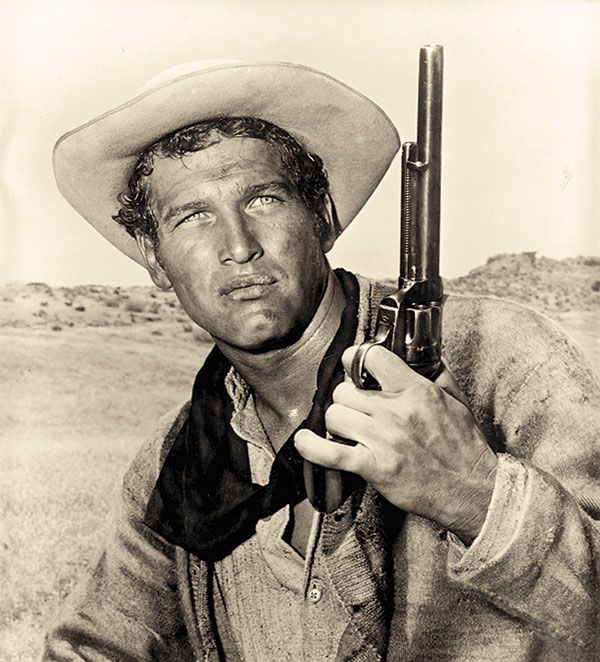 Outlaw Billy the Kid was popularly viewed with a big iron on his left hip, which inspired the 1958 Western The Left Handed Gun, starring Paul Newman as the Kid (above). This created a major “oops” since the historical photograph actually showed a mirror image! 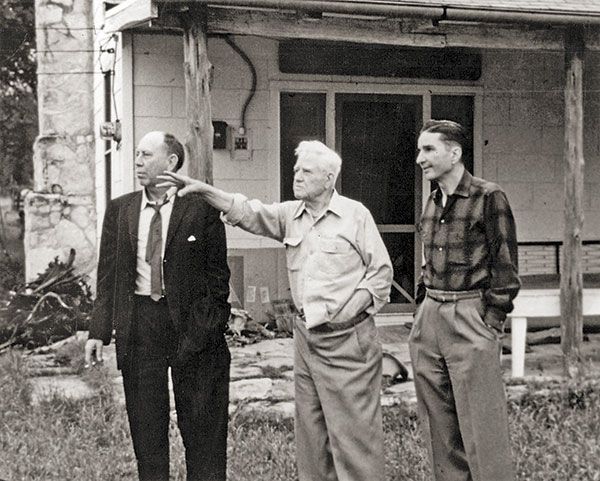 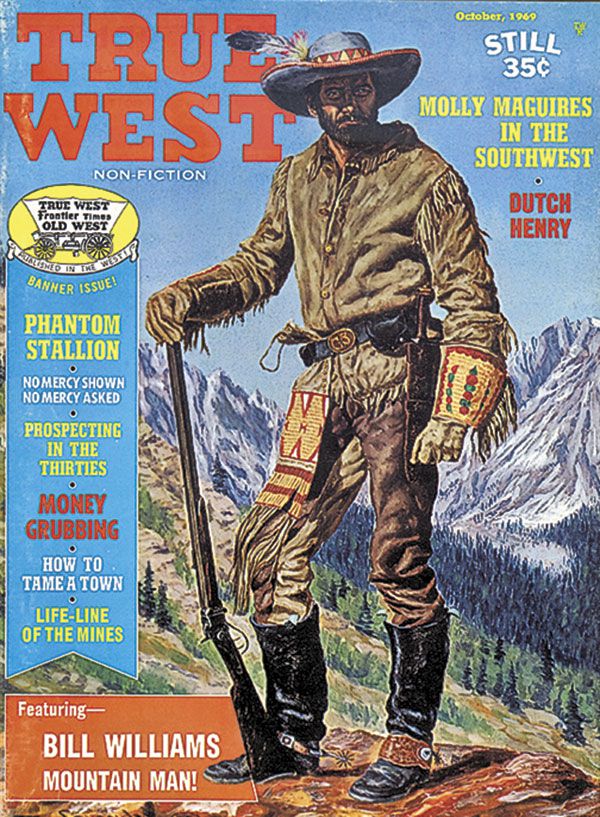 Despite this strong image, sales started to sag with this issue. Some blamed the Vietnam War. 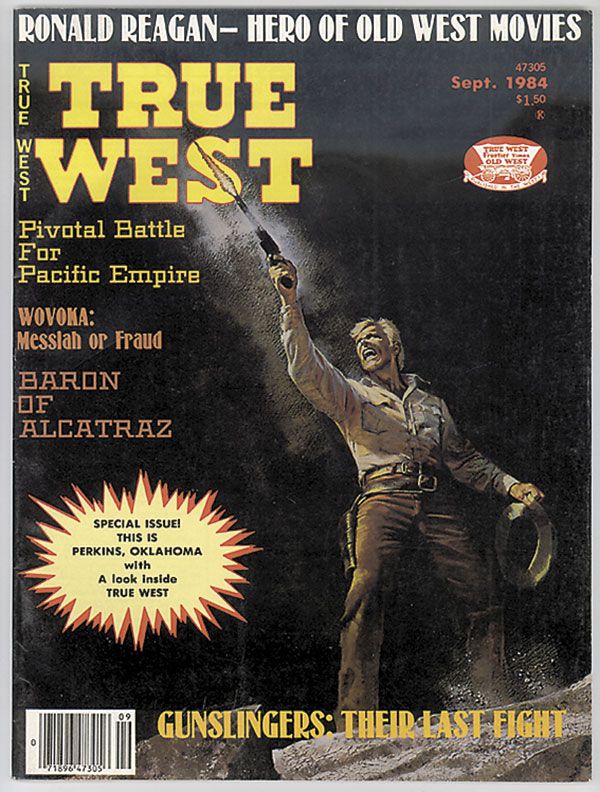 This spirited effort attempted to reclaim the glory of the early years. 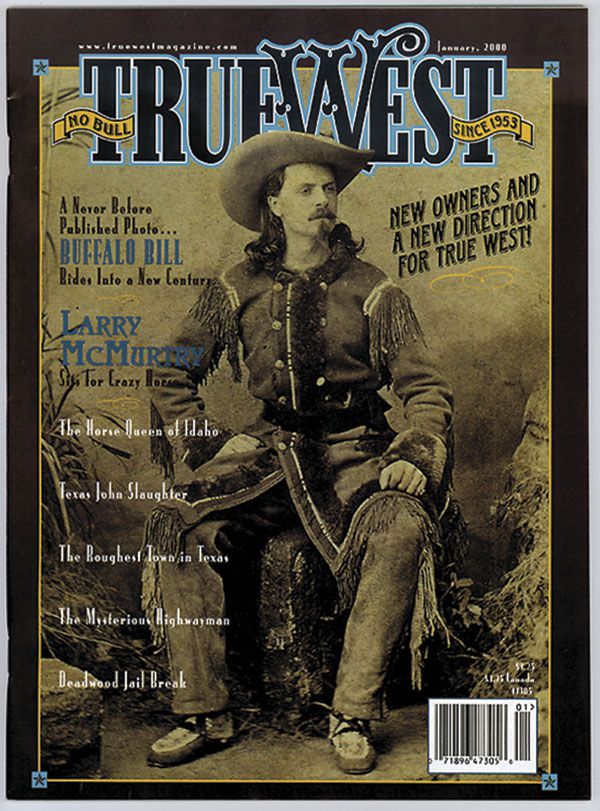 With a new logo and a new direction, this issue marked the first one published by the current owners. 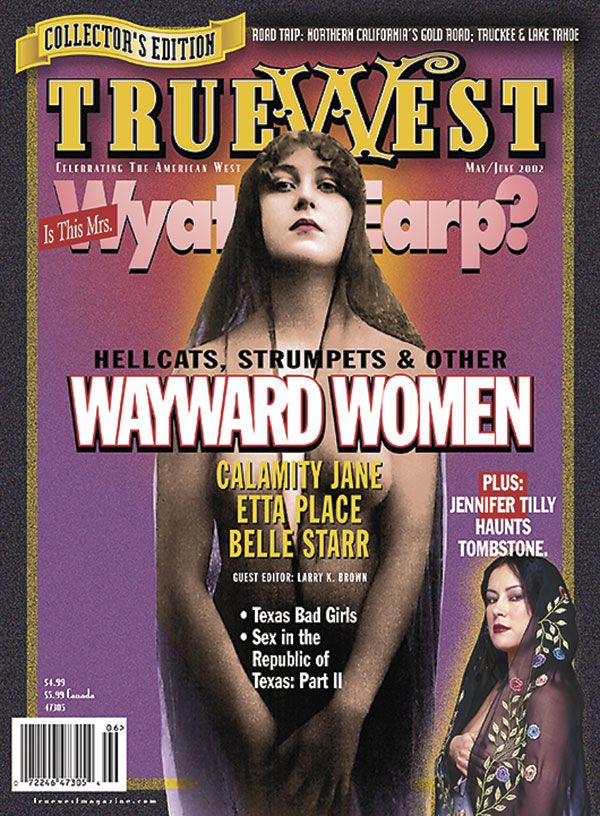 Actress Jennifer Tilly raved about the magazine on The Tonight Show with Jay Leno. 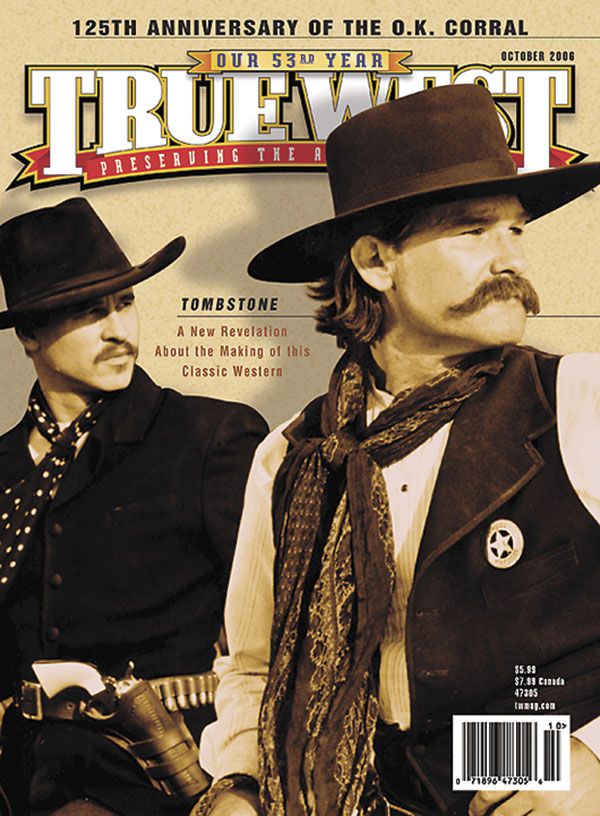 This extremely successful issue celebrated the 125th anniversary of the O.K. Corral gunfight. 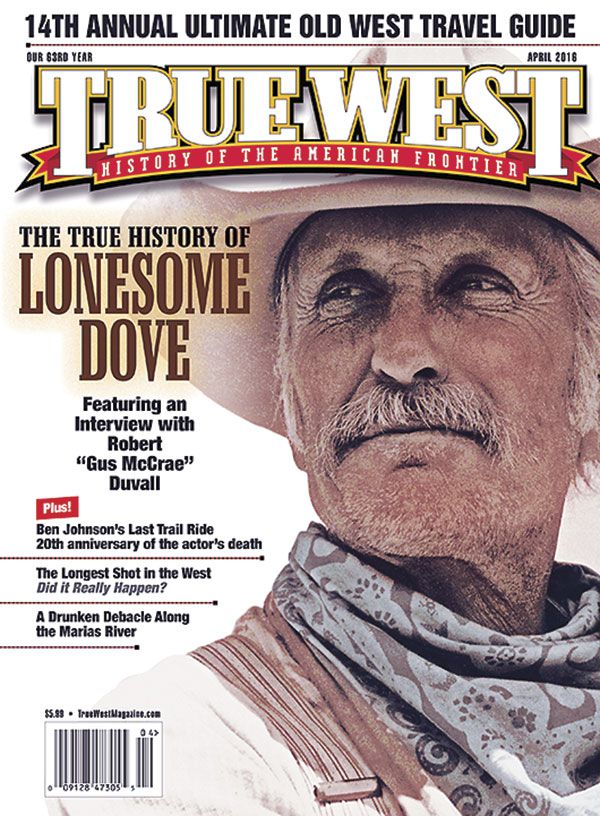 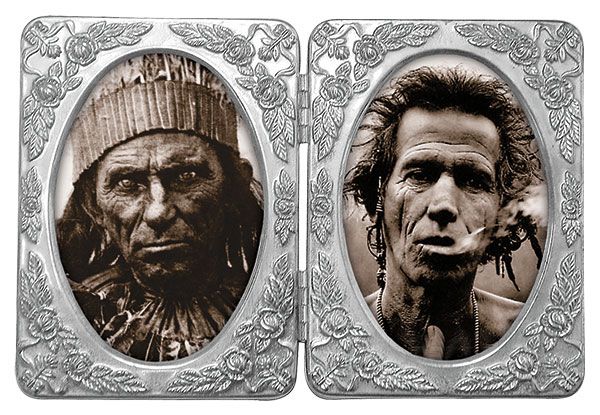 True West never takes a legend at face value. The magazine aims for all of our frontier West stories to present factual detail and historical context, but these pages are also a place to have fun. American history can be great pop culture. Sometimes the best way to humanize our history is to throw a fun twist on it. 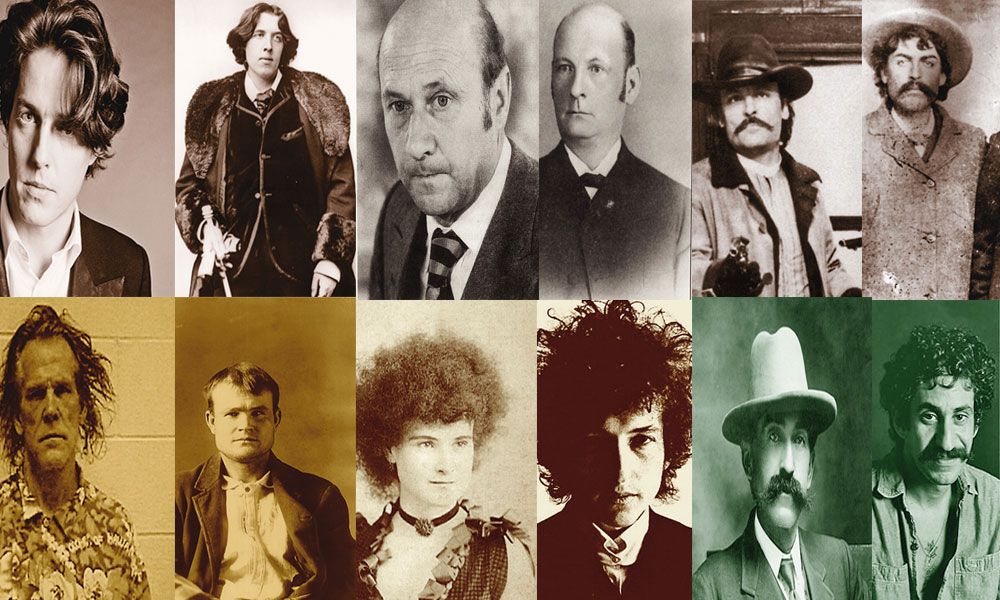 Historical Twins put into print an enduring contemplation: that person looks just like someone famous. Gus “Mapinator” Walker was digging through our photograph archives when he noticed a Pamunkey Indian bore a striking resemblance to the lead guitarist for the Rolling Stones. That pair became our first twins, published in our September 2006 issue.

After several years, our staff had trouble finding duos to pair up and the feature ended. We would love to see what historical twins today’s readers can put together! 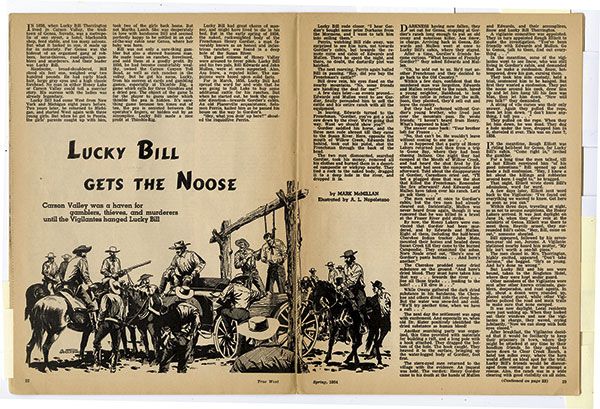 True West has featured some talented illustrators, including Al Napoletano, whose career spanned five decades. Without artwork by talented artists who range from Andy Thomas to our executive editor, Bob Boze Bell, we would not always succeed in bringing the printed word to life.

We wish we could go back in time and ask artists to illustrate a momentous event as it was happening or ask a photographer to aim his camera this way and that way, but we can’t.

Quite frankly, even that work might not be up to par compared to the research expended by not only our talented artists, but also our mapmakers and graphic designers.

For most of human history, the visual has expressed the non verbal in cave dwellings and pictograph hides, and humans still grasp so much of the story when told in pictorial form.

History buffs enjoy standing in the exact spot where battles happened, in the ruts where settlers rode through the frontier wilderness in covered wagons and in the storied structures and sites where James Bowie, “Texas John” Slaughter,  “Buffalo Bill” Cody, Kit Carson, Marcus and Narcissa Whitman, Geronimo and other legendary characters lived their most formative and dramatic moments.

Hitting the road to see where history happened has been a True West tradition for 65 years (check out past articles and ads presented here), and we look forward to seeing where the road takes us in the future. 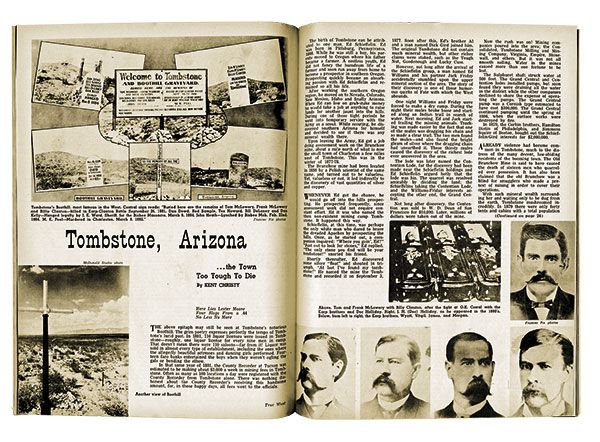 April 1955: Reading Kent Christy’s Tombstone travel feature today helps us imagine the excitement families must have felt as they piled into their new 1955 Chevy Nomad station wagons, filled up the water bags and headed across the Arizona desert to
check out the O.K. Corral and Boothill. 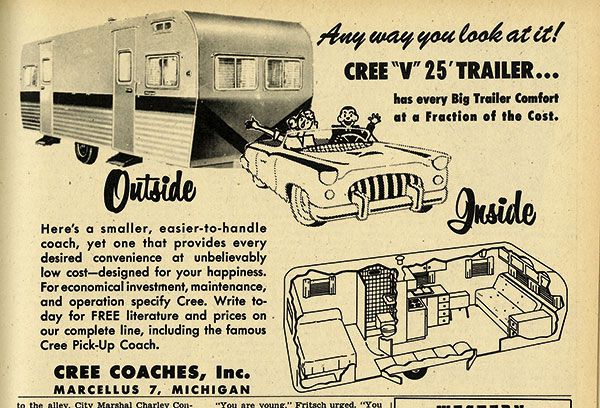 April 1955: You’re more likely to see a majestic RV home during your Western travels today, but this Cree Coaches ad deserves a chuckle—the couple appears to be pulling the trailer with a newfangled Corvette! 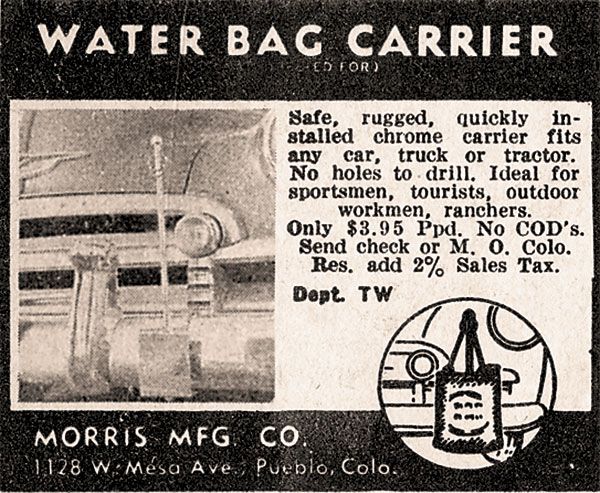 August 1955: Water bags were a “cool” item during the 1950s, when people were traveling in desert areas where water was not readily available. This True West ad offered readers the option of carrying their water bags in style, via a pole attached to their vehicle’s bumper. 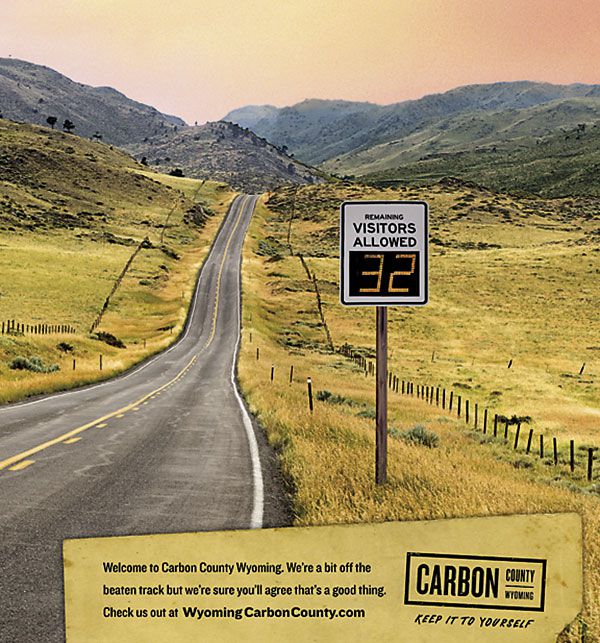 April 2010: Highway travel often leaves you driving past history, not through it. In this annual travel issue, Wyoming’s Carbon County showed off the majestic views of a two-lane blacktop to encourage folks to get off the highways.

Talking with our readers has always been important for True West, whether the magazine was overseen by founder Joe “Hosstail” Small or today’s Executive Editor Bob Boze Bell.

This valuable feedback used to be restricted to letters mailed to the magazine. But thanks to the Internet and Social Media Age, our team has conversations with our readers via numerous mediums.

A fun conversation our staff has during our editorial and design meeting every week is discussing which photographs have attracted the most viewers. Check out our Facebook home runs!

Next year, True West will continue to bring you insight into: the Old West’s top preservation projects; the latest Western movies and TV programs; grand recipes that allow you to cook up history in your kitchen; the finest frontier art, photograph and artifact collectibles; and the most interesting developments in history investigations that broaden our understanding of the American West.

In addition to the thought-provoking historical nonfiction and heritage travel features we hope will help keep the spirt of the West alive, these upcoming department reads promise to paint a picture of what frontier history says about life, the world and the times we live in.