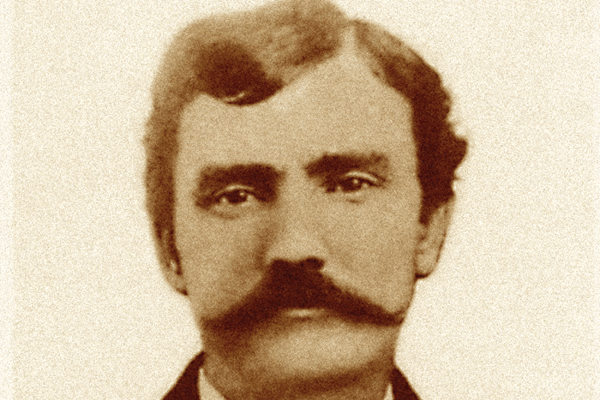 They met that March 11, 1884, in Austin, Texas, by chance or plan … we don’t know for sure. But their meeting was to be an historic and a tragic one.

Ben Thompson and John King Fisher were two of the most notorious gunfighters of the Old West. Bill O’Neal ranks them number eight and 10, respectively, in his book Encyclopedia of Western Gunfighters; sandwiched between them is Billy the Kid at nine, and they are well ahead of Wyatt Earp. Thompson and Fisher were widely known in their own time; much more so then than they are today. A Stuart Lake or Walter Noble Burns (who wrote popular books about Wyatt Earp and Billy the Kid) never came along to perpetuate their notoriety.

It isn’t clear how well the two knew each other before that day which was to be their last on earth. In any case, they would have had much in common to bring them together. They both were flamboyant, worked both sides of the law and liked to drink, gamble and party. On March 11, 1884, they were drinking buddies out having a good time, first in Austin, Texas, and later in San Antonio.

After meeting up in Austin, Thompson gave Fisher a cabinet photograph of himself taken a few days earlier by Austin photographer H.R. Marks. He boldly inscribed it on the back, “To my friend King Fisher, Ben Thompson, Austin, Texas, March 11, 1884.” Fisher slipped it in his coat pocket, and the friends proceeded on their rounds. Later that evening in San Antonio, Fisher and Thompson were gunned down in the Vaudeville Theatre. (Read the full story in Classic Gunfights in March 2006.)

The San Antonio Daily Express was quick to  pick up on the memento when it reported on March 13: “While in Austin, King Fisher had been given a picture of Ben Thompson by Ben, and had the photograph in his pocket when killed.” Although the photo was not penetrated by any of the numerous bullets that entered King Fisher’s body, it had been stained by his blood.

Thompson Photo is a Rare Find

As a collector of historical photographs, I must admit that this cabinet card is quite a find. There are three major areas of collecting Old West Antiques: Original photographs, autographs and relics (such as guns, knives, hats, chaps, spurs, etc.). Among the most sought-after and valuable are original photographs and autographs of the gunfighters, outlaws and lawmen, and relics that can be documented as having belonged to them. It is indeed rare when something falls into all three categories, as does this Ben Thompson photograph. It is even more exciting to a collector because it relates not just to one, but two of the most notorious Old West gunfighters … inscribed by one … and with the blood of the other.

This historical treasure was apparently returned to Fisher’s family in Uvalde, Texas, following his death. The photograph resurfaced about 15 years ago when an elderly lady from the Uvalde area presented it to a lawyer in San Antonio.

When I first learned of the photograph, needless to say, I was excited, anxious … and nervous. It seemed too good to be true. But it was! It’s also rare to find a photograph that has been documented by a newspaper of the time.

When I called a collector friend of mine to tell him that I had located an original photo of Ben Thompson, he, too, was excited. When I told him that the best thing about the photo was the inscription on the back, he asked, thinking of the most outlandish thing he could, “What does it say? To my friend, King Fisher.” I said, “Yep!”