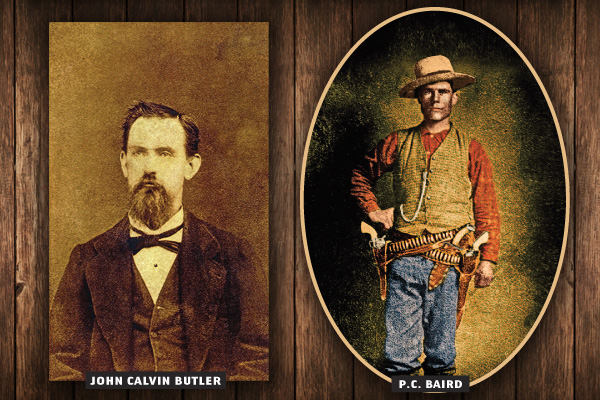 Corporal Phillip Cuney Baird of the Texas Rangers is ready to catch some fence cutters.

The previous night, he led Pvts. W.A. Mitchell, W.W. Baker and Oscar D. Baker on a stakeout at a ranch that had its fence cut.

The two Greer brothers who own the downed barbed-wire fence, William Joseph “Joe” and G.B. “Green,” are sheep raisers in Edwards County. With Texas undergoing severe drought, the Greer boys had fenced off their waterhole, Green Lake. Cowmen were angry—intolerantly so!

The Greer brothers had sought the help of Texas Rangers to ensure that the fence stays up. The problem is rampant; in just the previous year, fence cutters struck in more than half of Texas’s 171 organized counties.

In the dead of night, Cpl. Baird and three Rangers—including two who are not related by blood, but are brothers of the badge—secreted themselves near Green Lake, hoping to catch the fence cutters in the act, after the wire was spliced and tacked back into place.

In this new day, the cut to the chase proves effortless for these Rangers. Around 4:30p.m., they watch four fellows cut the wire. Any preplanned apprehensions the Rangers may have had, though, detonate with explosive reverberations.

Mark Hemphill, Henry Burton, John Brunson and John Bailey, a convicted murderer and escaped convict wearing the alias John Mason, are not inclined toward peacefulness when these Rangers challenge them. Curse words are hurled and Winchesters bark as the cutters seek cover behind brush and a waist-high rock fence. Ranger W.W. Baker catches a bullet; the wound in his left side knocks him down and out of the fight.

From a nearby hilltop, Green witnesses the battle—estimating nearly 150 shots are exchanged. Impressed by the Rangers’ gunfighting grit and Baird’s unruffled demeanor, he notes that, during the gunfight, the corporal is “ever ready with words of encouragement to cheer on the brave boys under his command.”

Green watches as Oscar fumbles, mistakenly trying to jam a Colt .45 cartridge through the loading gate of his .44-40 caliber Winchester, an error of enormity.

Subsequent to Oscar’s slipup, Green witnesses an act of heroism. “Mason stepped from behind his bush and raised his gun to shoot Mitchell,” he later reports. “Baker’s gun cracked and Mason staggered back with a bullet in his breast. Quick as lightning Mitchell planted another one in his bosom. Mason moved back behind the brush, but in doing so exposed himself to Baird’s fire, and soon the smoke boiled from that gentleman’s gun
and down went Mason with a bullet in his brain.”

The other three cutters escape on horseback—temporarily. The breathless Rangers cannot reach their horses, hidden away over a mile distant, so as not to chance a whinny upsetting their plans of capture.
Ingeniously, Baird jerry-rigs a bucket and suspends it above W.W.’s oozing lesion, providing a continual drip through a nail hole, which trickles a “small stream of water on the wound to keep down inflammation.”

After John Mason’s body lay unmolested for 22 hours in the July sun, and the nearest magistrate 45 miles away and unavailable, P.C. Baird made the command decision to bury it, absent an inquest.

A pair of doctors traveled from their practice in Junction City and patched up the wounded Pvt. W.W. Baker, charging $10 for seeing the patient and $1 per mile for the trip.

When the three fence cutters are ultimately caught, they claimed they had been attacked by unknown assailants, since the Rangers were not wearing uniforms. The son of one of the bad guys pressed charges, and the Rangers had to post bond. But in the end, the Rangers were cleared of any wrongdoing.

Recommended: Bad Company & Burnt Powder: Justice and Injustice in the Old Southwest by Bob Alexander, an upcoming book due out from University of North Texas Press