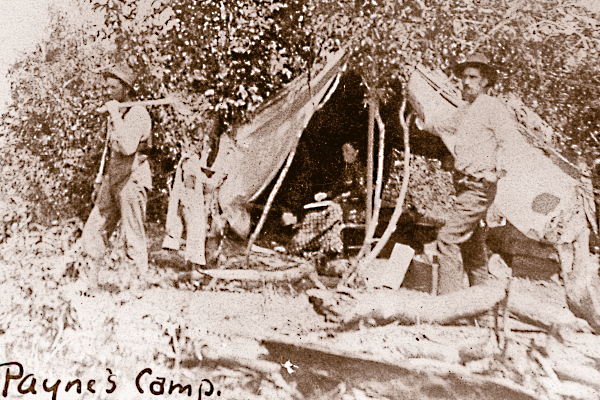 A celebration broke out when Oklahoma Territory became an official entity 125 years ago, on May 2, 1890. But the man who may have been most responsible was not around for the party.

In 1879, William Couch, a 29-year-old businessman in Wichita, Kansas, heard David Payne talk about free land in what is now Oklahoma and joined him in his cause.

In the post-Civil War years, the U.S. government had taken away land from tribes that supported the Confederacy. Payne felt those unassigned lands should be open to settlement. In the early 1880s, Payne led his “Boomer” followers on mounted expeditions to their promised land.

Federal troops and lawmen kept moving the Boomers out of the territory. Boomers were even taken before “Hanging Judge” Isaac Parker in Fort Smith, Arkansas, but the charges were usually dropped.

The effort hit a snag in November 1884, when Payne died from a heart attack. His second in command, Couch, reluctantly took over. He didn’t feel he could lead the movement and its roughly 14,000 followers.

Despite his reservations, that December, Couch led about 300 men to a place called Stillwater. After a tense standoff with the Army, Couch withdrew. He and 12 Boomers were arrested for treason in January 1885, but those charges, too, were dropped.

Couch kept up the pressure, however, lobbying federal officials and politicians to open up the lands. He had public opinion on his side. In March 1889, Congress passed a law allowing folks to stake out land in the Oklahoma area. On April 22, about 50,000 people participated in the first Land Rush.

Couch and his Boomers were part of it—well, sort of. Couch and other “Sooners” went in early to stake out claims, including a burg that they called Oklahoma City. On May 1, Couch became the city’s first mayor. He held that position for around six months, before he resigned to work his land.

But he had a problem. At least seven other people also claimed the homestead, and several of them were living on the site until the courts could sift out the owner.

On April 4, 1890, the day after John C. Adams knocked down a fence Couch had built to protect his wheat from Adams’s livestock, tempers flared and Adams shot Couch in the knee. Couch died from the infected wound on April 21—just 11 days before Oklahoma Territory became official.

The courts later disavowed the claims of Couch and Adams (then in jail for the shooting), ruling in favor of Dr. Robert Higgins. The good doctor did a good deed—giving some of the land to Couch’s widow and five children.

Oklahoma Territory combined with Indian Territory to become Oklahoma state in November 1907. Couch was all but forgotten—a sad fate for the Boomer Sooner who had pretty much made the creation of Oklahoma possible.