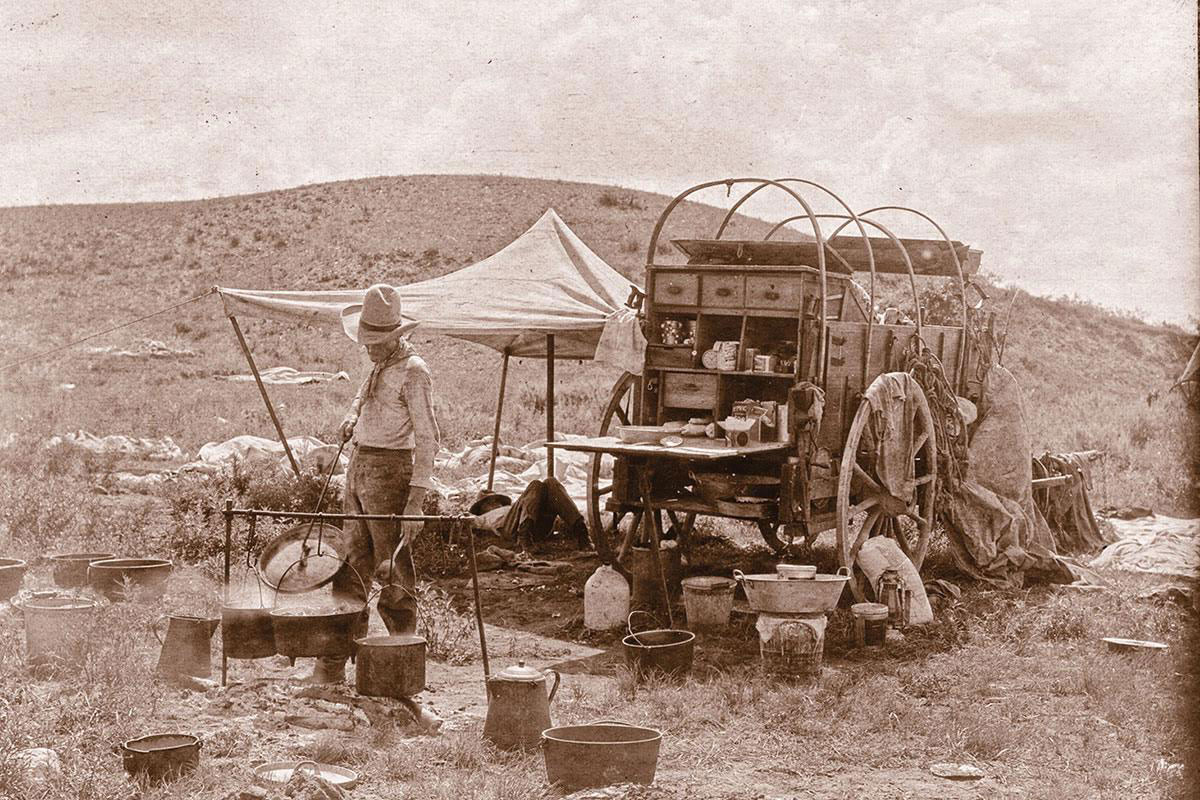 The chuck wagon cook’s normal day started hours before the cowhands climbed out of their bedrolls. Getting up around three in the morning he started by grinding roasted coffee beans to make his blend of coffee. The hand grinder normally would be mounted to the outside of the pantry box. The cowhands demanded their coffee strong enough to “float a horseshoe.”

Then pinching some sourdough starter from the crock stored in the pantry, he blended this with more flour and water to make a large serving of biscuits. Then he’d cook up some bacon or “sowbelly,” potatoes and sourdough pancakes or “flapjacks.”

A typical herd consisted 1,500-2,000 head of cattle and a typical outfit comprised a trail boss, ten to fifteen cowhands and each had a string of five to ten horses. There was a wrangler who handled the horses and a cook who drove the chuck wagon. The outfit usually had a kid who rustled up firewood and drove the hooligan wagon holding the bedrolls and the cowboy’s “warsacks,” where they kept personal items. His job was to help out the cook.  The wrangler was also a younger hand and would help out also.

The chuckwagon didn’t travel with the herd. After the boys were fed breakfast, the cook would clean up the plates, pots and pans then move on ahead to prepare dinner before the herd arrived at the noon stop.

The noon meal was pretty meager, usually whatever was left from breakfast was warmed up and served. Afterwards the cook would clean up then move up the trail to prepare for the evening camp, collecting firewood or buffalo chips along the way for the campfire. The usual evening meal consisted of beans, salt pork, dried apples and an occasional beef steak.  A creative cook was worth his weight in gold. He might find a prairie hen’s nest and cook up a special dessert.

After evening chow and while the cowhands were sitting around the fire drinking coffee and telling tales, the cook was busy cleaning up, feeding his sourdough starter and getting things ready to repeat the process the next day.