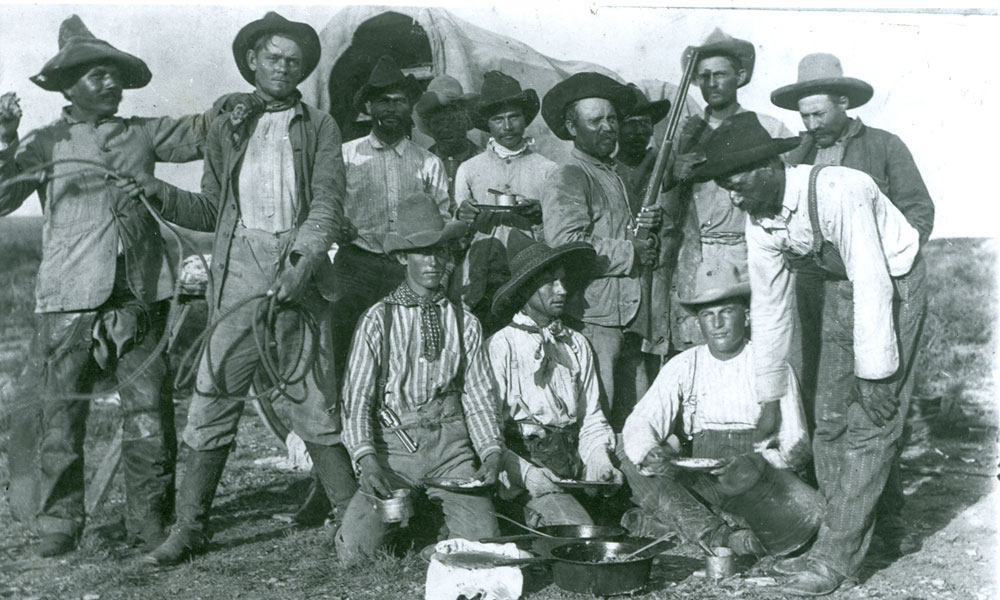 In my “Ask the Marshall” column for True West magazine I get many questions about the most important man on a trail drive, the cook. The chuckwagon cook’s normal day started hours before the cowhands climbed out of their bedrolls. Getting up around three in the morning he started by grinding roasted coffee beans to make his blend of coffee. The hand grinder normally would be mounted to the outside of the pantry box. It had to be strong, the cowhands demanded the brew be able to “float a horseshoe.”

Then pinching some sourdough from the crock stored in the pantry as he blended this with more flour and water to make a large serving of biscuits. Then he’d cook up some bacon or “sowbelly,” potatoes and sourdough pancakes or “flapjacks.”

Afterwards, the cook would clean up the plates, pots and pans then move on ahead to prepare dinner before the herd arrived at the noon stop.

The chuckwagon didn’t travel with the herd. The cook would have to move on up the trail at a fast clip so chow would be ready for the mid-day meal. It took about two hours to get it ready as neither the boss nor the cowhands would tolerate late meals.

The noon meal was pretty meager, usually whatever was left from breakfast was warmed up and served. Afterwards the cook would clean up then go hell-for-leather to prepare for the evening camp, collecting firewood or buffalo chips along the way for the campfire. The usual evening meal consisted of beans, salt pork, dried apples and an occasional beef steak.  A creative cook was especially popular the hands, especially when he found a prairie hen’s nest of eggs and cooked up a special dessert.

After evening chow and while the cowhands were sitting around the fire drinking coffee and telling tales, the cook was busy cleaning up, feeding his sourdough starter and getting things ready to repeat the process the next day.