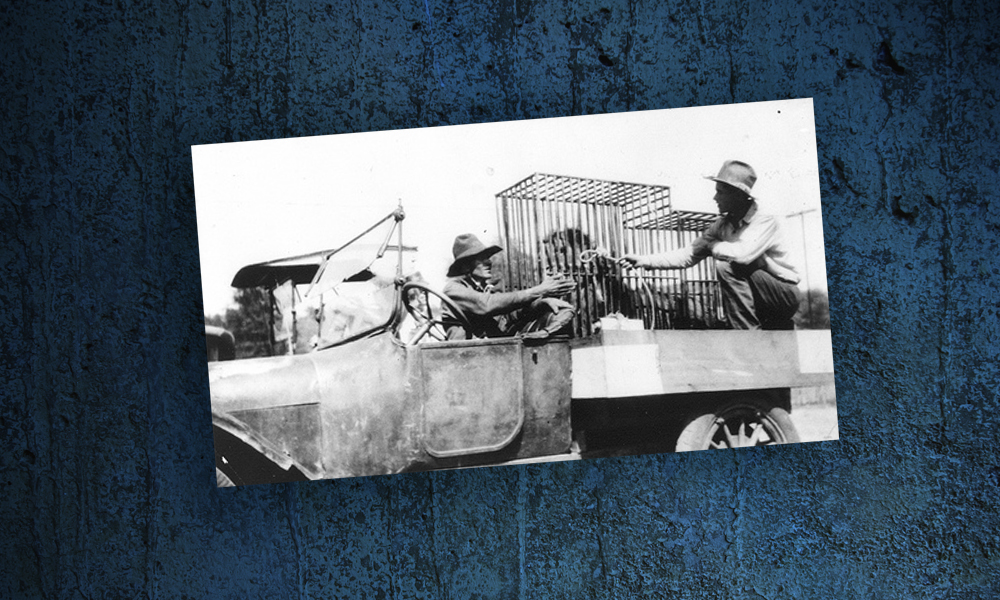 In September, 1927, MGM Studios decided to send their new mascot, a 400-lb. African Lion, on a goodwill trip by airplane to New York City. The aviator in charge was a stunt pilot named Marty Jensen. Unfortunately, Marty’s plane couldn’t get enough elevation to fly up and over Arizona’s “Backbone,” the 1,000-foot-high Mogollon Rim. On September 16th, he crash-landed near Hell’s Gate on Tonto Creek, east of Payson and spent the next three days trying to reach civilization.

Marty was able to enlist the help of some Rim Country cowboys to ride out and bring Leo out of the wilderness. These were seasoned cowhands who were used to plunging off mountain sides, down brushy canyons in pursuit of wild cattle. They’d doctored wild range bulls they figured were probably more dangerous than an African lion.

When asked if they feared having to rope, tie and doctor an angry African lion one of them replied, “Compared to those wild cows in the Tonto Basin this lion is just a pussy cat.”

And off they went. They dropped a loop around his neck, opened his cage door and roped and tied him as he ran out. They not only manhandled ol’ Leo, but after doctoring his wounds they drug him back into his cage, they tied pine logs to the bottom to make a sled then drug him up to a clearing near today’s Kohl’s Ranch. There they loaded him on a flatbed truck and hauled him into Payson where the locals rolled out the carpet for the first celebrity to visit the town.

So today when you’re watching an MGM film and you see that angry lion roar it’s just Leo. He still hasn’t forgotten his visit to Arizona’s wild Rim Country.