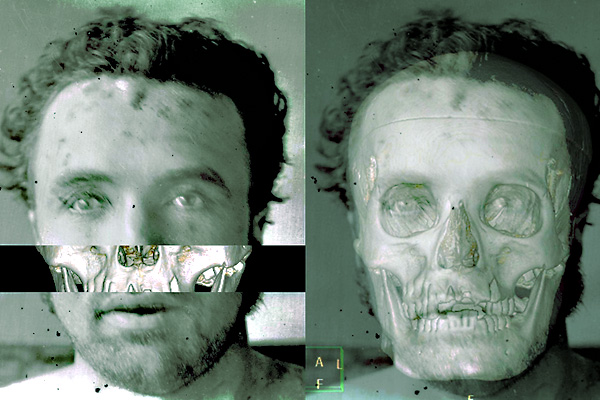 We are rough men and used to rough ways,” said Bob Younger, after he was captured for his role in the foiled bank raid in Northfield, Minnesota.

Nobody had it rougher than Clell Miller. That’s not just because the James-Younger Gang member died during that Northfield robbery. The last 136 years haven’t been too kind to his skeleton either.

Miller was one of the two outlaws who died in the street on September 7, 1876 (Bill Chadwell was the other). Henry Wheeler, back home during a break in his medical studies at the University of Michigan, put a fatal bullet in Miller when things started turning hot.

Wheeler wasn’t done with his new acquaintance though. Reportedly, he asked two fellow medical students to dig up the dead desperadoes. Clarence Persons and Charles Dampier removed the bodies, put them in two barrels labeled “fresh paint” and shipped them to Ann Arbor, Michigan, where Wheeler and his classmates studied anatomy on them.

Miller’s family found out and asked for Miller’s remains (sending little brother Ed, who would go on to ride with—and probably be killed by—Jesse James). Wheeler gave them a skeleton, which they buried in the family plot in a cemetery outside Kearney, Missouri.

Wheeler earned his degree and opened a practice, first back in Northfield and later in Grand Forks, North Dakota. In each office, he showed off a skeleton; more than one patient said the good doctor identified it as being Clell Miller.

In the 1920s, the Grand Forks Odd Fellows Lodge came into possession of the bones. About 30 years ago, a private collector, who wishes to remain anonymous, got a hold of them.

But is it Miller’s skeleton? Is his body buried in Missouri?

Some answers may be coming.

Last year, Dr. James Bailey, a professor at the University of North Carolina in Wilmington, performed craniofacial superimposition on the Grand Forks skull; he placed high-tech scans of the skull over a post-mortem photo of Miller. The results weren’t conclusive, but Bailey called them “remarkable.” He and three independent sources found they fit. His research keeps open the possibility that Miller’s skeleton is in North Dakota.

DNA would help close the case. But so far, the bones in North Dakota have not yielded useable genetic material. Dr. Bailey asked the owner to donate a tooth for that effort, but he declined—he doesn’t want to destroy any part of
the remains.

The other option is to check the DNA of the skeleton buried in the grave outside Kearney and compare it to DNA from Miller family descendants.

Some of Miller’s kin support the project; they want to know the truth. They sent their exhumation request to Clay County authorities this past June.

Another question remains. If DNA eventually proves that the remains in the Missouri grave aren’t Miller’s—or if information shows the skeleton in North Dakota is the dead outlaw—what will the collector do? Will he return the bones to the family? Dr. Bailey says the collector has not yet shared his plans.

Bailey remains optimistic that—as slow as it seems—the process will proceed and, eventually, Clell Miller’s bones will be identified and appropriately buried.