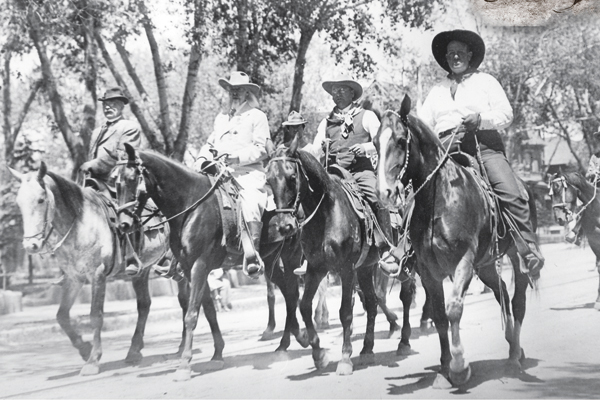 When C.B. Irwin rode into an arena and announced an event, he did not need a megaphone for this big man had a booming voice.

Born Charles Burton Irwin to a blacksmith father and homemaker mother, he spent his early years in Kansas and Missouri before moving as a teenager to Colorado Springs, Colorado, where he worked in the blacksmith shop alongside his father. He was sometimes called Charlie. People who knew him well, however, said he would “answer to that name if cornered” but preferred to be called C.B.

He and wife Etta May McGuckin started their family with son Floyd Leslie, born before the family relocated to Colorado Springs, and in Colorado, they had two daughters, Joella and Pauline. Another daughter Frances was later born in Wyoming. Blacksmithing with his father in Colorado couldn’t hold C.B., so he relocated to southeast Wyoming where he found work with C.J. Hysham and Co. of Omaha, contracting for and supplying beef to the Sioux on the Standing Rock Reservation at South Dakota’s Fort Yates. He then became livestock foreman for the Warren Livestock Company where he met and became lifelong friends with Gen. John J. Pershing, who had married Wyoming Gov. and then Sen. Francis E. Warren’s daughter, Frances.

By 1902, C.B. worked at John Coble’s Iron Mountain Ranch, north of Cheyenne, handling a string of rodeo bucking horses owned by Coble that he took to the Festival of Mountain and Plain in Denver. In that string was Steamboat, a big black horse that would become the most famous of all Wyoming buckers.

C.B. met and became friends with the notorious stock detective Tom Horn, who also worked for Coble. On July 18, 1901,
14-year-old Willie Nickell, son of home-steader Kels Nickell, was ambushed and killed when he stopped to open a gate less than a mile from the family homestead in the Iron Mountain area. There were other suspects, but Tom Horn was convicted of the killing and sentenced to hang. When he stood on the gallows in Cheyenne in November of 1903, he asked C.B. and C.B.’s brother Frank to sing “Life’s Railway to Heaven,” which they did just minutes before Horn dropped to his death.

Like other cowboys working the big ranches of southern Wyoming in the early 1900s, C.B. attended and participated in Cheyenne Frontier Days, which had begun in 1897. This big man was particularly adept with a lariat and won his first steer roping championship at Cheyenne in 1900; he claimed another title in the same event in 1906.

Once he had enough money saved, C.B. bought his own ranch on the banks of Horse Creek, east of Cheyenne near the small community of Meridian. Known as the Y6, the ranch eventually expanded to over 23,000 acres. At the Y6, his children learned to ride and rope—ranch skills that would serve them well when C.B. and Frank later formed the Irwin Brothers Wild West Show.

Not content on the ranch, C.B. moved to Cheyenne in 1905 and began a career as a general livestock agent for the Union Pacific Railroad. He later became the UP’s general agent, helping track shipments and even taking part in the capture of train robber Bill Carlisle. His interest in rodeo never waned, so he became the stock contractor and arena director for Cheyenne Frontier Days.

That annual rodeo was never quite the same after C.B. became involved. He introduced relay races, Roman riding, trick riding, trick roping and women’s bronco riding to the schedule. Many of these were events at which his own children excelled, and newspaper headlines of the day often regaled readers with the exploits of the talented Irwins. In his position as general agent for the UP, he arranged for “entire trains loaded with rodeo fans from Denver and Omaha.”

One of the regular attractions at a rodeo produced by C.B. was Steamboat. The black gelding was chosen as the Worst Bucking Horse of the Year at Frontier Days in 1907 and 1908, while reporters called him the “Outlaw Horse.” In those days, the title Worst Bucking Horse was as coveted as that of World Champion Bronco Rider. Such a distinction for Steamboat meant people would come to events just to see the horse.

Therefore, in 1912, when C.B. and Frank formed the Irwin Brothers Wild West Show, they advertised Steamboat as one of the show’s stars. Another of C.B.’s top horses was named after a man he admired and considered a friend: Teddy Roosevelt.

Traveling across the country with the Wild West Show, C.B. had no opportunity to miss his family: They were all right there with him. Son Floyd roped calves and demonstrated trick riding. Joella and Pauline rode in relay races. Youngest daughter Frances roped, either while standing on the ground or from a perch on the back of a Texas Longhorn Steer.

Floyd had married by 1917, and he told his father he wanted to remain in Wyoming, running the Y6. In Cheyenne, just three days before Frontier Days, C.B. hosted an impromptu event for some visiting soldiers. Just before he set out to rope a steer, Floyd told his cousin Gladys, who was also a part of the show, “I believe I’ll tie this one for getting in a bunch where he don’t belong.” Floyd spurred his horse after the steer and cast his lariat that had been tied firm to his saddle horn. Believing that he had failed to make the catch, he turned his horse. But the rope had landed, and when the steer jerked it tight, the movement forced Floyd’s horse to throw up its head, striking Floyd and fracturing his skull. Floyd died the next day.

The loss of his only son forever changed C.B. He completed his obligations to Cheyenne Frontier Days that year and then disbanded his Wild West show.

But nothing could keep C.B. from working with horses. By the mid-1920s, he was heavily involved in thoroughbred racing. He raced in Chicago, Kansas City, at Ak-Sar-Ben in Omaha, at the Tijuana Race Track and at Agua Caliente in northern Mexico.

On the race circuit, he became known as a man who operated quite a cookhouse. There always seemed to be more people at the dinner table of his winter home in San Ysidro, California, than the number of men working for C.B. When the cook would complain, C.B.’s answer was always the same: “Add a little more than you figured when you start to cook.”

C.B. had a tough demeanor, and his weight had ballooned to around 500 pounds as the result of a thyroid condition, but he had a generous spirit.

“I have known Charlie Irwin intimately ever since he came to Cheyenne some 30 years ago,” Cheyenne resident Warren Richardson wrote. “I have ridden many miles with him, visited him at his ranches, and I have never heard him speak lightly of a woman … nor have I ever seen him take a drink or use profanity. Charlie was proud of his charming daughters, to whom he furnished the best horses money would buy for their performances that for years delighted thousands.”

As a result of C.B.’s generosity, the California ranch—like the Y6 in Wyoming and the headquarters at Cheyenne Frontier Days before—came to be looked upon as a “haven for down-and-outers,” one newspaper reported in 1934. Among those who worked for Irwin during his Wild West show and racehorse days was Tom Smith, a talented horseman who held relay horses for the Irwin girls and who trained Irwin race horses. He would go on to discover and train the great racehorse Seabiscuit.

“Charlie absolutely loved danger,” Richardson wrote. “I have seen him jump in front of a crazy runaway team of horses, when it was like sure death to do so, and stop them. No automobile could go quite fast enough to suit him, regardless of the road.”

Coming Into the Old Home Ranch

And in the end it was an automobile that got C.B. Riding with son-in-law Claude Sawyer, C.B. was killed when the vehicle blew a tire and slammed into a ditch. His life had ended much like that of his only son Floyd, accidentally and unexpectedly.

More than a thousand people gathered for his funeral, where eight cowboys carried a casket draped with red and white flowers forming the Y6 brand and a horseshoe.

“Ah, old Cheyenne won’t seem the same,” humorist and friend Will Rogers wrote after C.B.’s death. “Every time I would step off an aeroplane there … I would holler ‘Where’s C.B.?’ and if he was in the town he would be there. Charley had a great career. He was a real cowpuncher in his day, and the greatest spirit and best company that ever lived. That other world up there is going to hear a whoop at the gate and a yell saying ‘Saint Peter, open up that main gate, for there is a real cowboy coming into the old home ranch. I am riding old ‘Steamboat’ and using ‘Teddy Roosevelt’ for a pack horse. From now on this outfit is going to be wild, for I never worked with a tame one.”

Candy Moulton is the author of Steamboat: Legendary Bucking Horse and Roadside History of Wyoming.