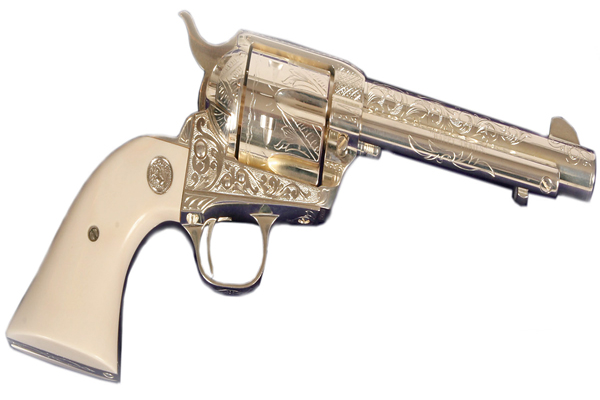 When it comes to silver screen legends, few are as beloved as cowboy heroes Hopalong Cassidy and the Lone Ranger.

These celluloid range riders have inspired a special Colt Single Action Army (SAA) revolver and gunleather outfit that will be raffled off this year. Dubbed the “Silver Screen Legend IX,” this Western rig continues the tradition of the eight special six-gun sets that have raised almost $700,000 for the abused children who reside at the Cooper Home, a project of the Happy Trails Children’s Foundation, in Apple Valley, California. This was a favorite charity of Roy Rogers and Dale Evans, who, as real-life Western heroes, devoted much of their lives to helping children.

Donated by Colt’s Manufacturing Company of Hartford, Connecticut, the smokeless-frame Peacemaker is a copy of one of the 51?2-inch barreled SAAs carried by Hoppy, as portrayed by William Boyd, whose film career included 66 feature films for Paramount Pictures. The Colt has the same engraving pattern as one of Cassidy’s, is fitted with genuine, legal (pre-ban) two-piece elephant ivory stocks with the silvered Colt logo and has a sterling silver mirror finish.

Mated to the Hoppy “forty five” is a unique gunbelt and single holster that copies the double-gun rig worn by Clayton Moore, who played the Lone Ranger in the TV series and in two feature films. Interestingly, Moore had some input in the design of the original Bohlin-made, Hollywood outfit. This fully lined, hand–carved black gunbelt, holster and billet is made with one right-hand holster, but the buscadero-style gunbelt is cut for the addition of a left-hand holster. The rig is ornamented with authentic replicas of the original sterling silver “raspberry” and California poppy spots, conchas, buckles and silvered .45 Colt dummy cartridges used on “Kemo Sabe’s” gunleather.

Several artisans across the nation worked together to create this one-of-a-kind Colt and gunbelt/holster set. Conceived and coordinated by Jim Lockwood, Jr., of Legends in Leather in Prescott, Arizona, the outfit will be presented to the winner, along with a beautiful presentation case—complete with the hand-carved likenesses of the two Western stars—crafted by Ben Hansen of Prescott, Arizona. The revolver’s engraving, sterling silver buckles and other adornments were created by Conrad Anderson of Rocktree Ranch Enterprises in Kingston, Idaho, while the ivory grips came from David Warther II of Sugarcreek, Ohio, and carver Bob Leskovec of Precision Pro Grips in Gibsonia, Pennsylvania. Ron Love of Prescott, Arizona, donated the dummy silver cartridges.