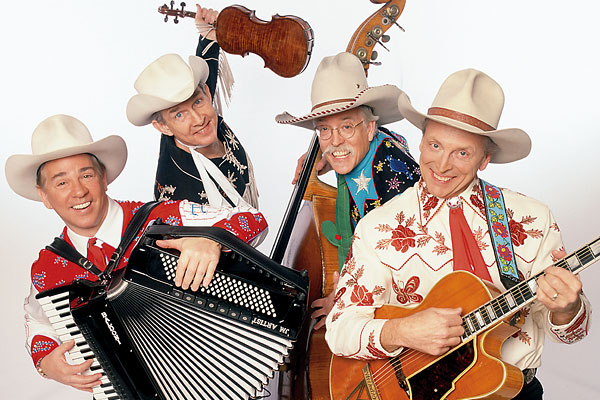 Okay, so the state of Western entertainment ain’t what it used to be

Fewer avenues (TV shows, movies) exist than were there 60 years ago.  The market for Western music is much smaller than when Roy Rogers and Gene Autry were actually played on the radio (does anyone remember radio?).

And yet there’s a dedicated group that fights the odds by aiming for the Western market. Many are singers. Some are cowboy poets (can you imagine what Deadwood’s Al Swearengen would say about that term?). Others are actors or re-enactors. Still others demonstrate skill with guns or ropes. Like their forebearers, many are real ranchers. Others are just living the dream created by Buffalo Bill and his cohorts.

Most are solo acts; it’s cheaper to do it that way, and besides it’s more Western to be the strong, solitary cowboy (or cowgirl). But you’ll find some big exceptions, especially the Great American Wild West Show, which celebrates its 10th anniversary this year.

All of the performers are united by their love of Western culture and the desire to spread the word far and wide. They’re preservationists as well as performers; they keep the West alive in some unique ways.

We’ve showcasing just some—emphasize “some”—performers in different categories, most of whom have been on the radar at major events this past year. Many, many more entertainers work with little compensation and less recognition. All deserve a tip of the cowboy hat for what they do.

Fables of the West
Ken McMeans has had a few careers in his time. He was a Hollywood stunt rider for awhile. He became a moderately successful song-writer and musician until he developed a cocaine habit. In 2000, a drug-free Ken and pal Eric Holmquist were booked to do an improv comedy routine at a fair. The job—stroll around the place and have fun with the visitors. Within three years, they were playing 87 fairs in 28 states, with an expanded team of about a dozen comics. The group has undergone some changes along the way—a new name (the old one, Wild West Express, ran into some copyright problems) and new performers. But the mission remains the same: keep the fans laughin’. And boy do they do that.

Arizona Gunfighters
In 2005, True West named these guys the “Best Old West Re-enactment Group,” and it’s easy to see why people still clamor for their performances. The members re-create the Gunfight behind the O.K. Corral, Wild Bill Hickok’s deadly shooting of Phil Coe in Wichita and several other dust-ups. And they pay attention to the costumes and sets as well as the events themselves.

Wyatt and Terry Earp
For 10 years, Wyatt Earp (yes, he’s a distant relative of the Wyatt) has been performing as the legendary lawman—in a play written by his wife Terry. In fact, she has authored a number of shows about Old West characters, some one-person efforts and others featuring both Wyatt and Terry. Each is an interesting take on the notable and notorious.

Bob & Betsy Munden
Gunfighter John Wesley Hardin wouldn’t have stood a chance against the Mundens, who have each set world records for fast draw. In fact, Bob has been timed at .0175 hundredths of a second for drawing and shooting a .45. That’s faster than the human eye can follow, friend. Over the years, the Mundens have shown their stuff at competitions and a variety of Western gatherings; they’ve also put out videos showcasing their remarkable talents.

Joe Bowman
You’ve probably seen Joe’s work, even if you haven’t seen Joe himself. The expert pistolero has helped train Hollywood gunslingers John Wayne, Ben Johnson, Charlton Heston and James Arness. And that’s not counting work with the Texas Rangers and the FBI. Bowman still does public appearances, demonstrating abilities that Wild Bill Hickok could only dream about

Beau Schwade
The self-styled “Master of the Bullwhip” practices a lost art, doing all sorts of amazing tricks while cracking a whip. Beau is also a top rope spinner and gun handler, as he demonstrates during his show. It all comes down to one concept—the hand is quicker than the eye.

Dwain Bond
For Dwain Bond, it’s “Have piano, will travel.” He’s rigged a vintage upright piano so it’s easy to transport between, say, Cheyenne, Wyoming, and Lincoln, New Mexico. Then when he sets it up, he plays songs from the late 1800s in the style that was popular during the day, so it really is like stepping back in time. And he’ll tell a bit of the history as well. westernmusic.org

Don Edwards
For a lot of folks, Don Edwards is the very definition of cowboy singer. His 42-year recording career has brought in more honors than one can count. He’s also an expert on Western music, giving presentations at colleges such as Yale and Texas Christian Universities. He’s done a bit of acting from time to time. And to top it off, he’s a part owner of the White Elephant Saloon in Fort Worth, Texas. You can’t get more Western than Don Edwards.

Juni Fisher
Juni is one of the colorful characters who populates Western entertainment. She’s a former fox-hunting professional, a recognized expert at fly-fishing and champion bridle horse trainer. Over the past few years, she’s become one of the top cowgirl singers around (her busy schedule shows how popular she’s become). She was also named the 2005 Academy of Western Artists Female Western Vocalist of the Year.

Belinda Gail and Curly Musgrave
Belinda and Curly have had tons of success, individually and collectively (most recently, they won the Western Music Association’s Group/Duo of the Year for 2005). He’s a well-respected poet and songwriter, as well as a top-notch singer. She’s been the top WMA female performer for five of the past seven years. They perform beautiful harmonies and funny onstage banter—and some wild duo yodeling.

Michael Martin Murphey
It’s been more than 30 years since Murphey burned up the pop charts with his signature hit “Wildfire,” but that doesn’t mean the man’s now occupying a rocking chair. He tours as much as anyone in Western music, headlining the big events in the field, and he’s still recording original and traditional songs—in fact, he claims to be the biggest selling cowboy singer around today, having received the first gold album since Marty Robbins. Like so many of his colleagues, Murphey is dedicated to preserving the Old West through teaching, collecting and sharing the music.

Riders in the Sky
What haven’t these guys achieved?  Several Grammy awards. More than 5,200 performances. Their own radio and TV shows. Becoming the first exclusively Western music artists to join the Grand Old Opry. Guest spots with folks from Roy Rogers to U2. And they’re funny, to boot. These riders have writ their story large across the sky.

Wylie & the Wild West
Wylie Gustafson is a real cowboy, working his own ranch in Washington State and competing in the odd rodeo. But he also brews up a musical concoction that mixes Western Swing, Country, Cowboy and Folk (with some yodeling for added effect) into something that is uniquely his. The toe-tapping tunes have made Wylie and Co. favorites at the Annual Cowboy Poetry Gathering in Elko, Nevada, and at the Grand Ole Opry.

Baxter Black
The former large animal veterinarian came to the entertainment field late, in his mid-30s. But since that time, back around 1980, the Brooklyn, New York-born poet and storyteller has become one of the most recognized voices of the West. A lot of that is due to his commentaries on National Public Radio. But his books and tapes and personal appearances have carried him to a remarkably high level of notoriety. Bottom line: Baxter Black is funny.

Waddie Mitchell
Waddie is one of the founders of the National Cowboy Poetry Gathering in Elko, Nevada, and if he’d never done another thing, that would be enough to rest his Tom Mix hat on. But he’s also one of the top Western poets himself (he made his first public appearance at the inaugural Elko event back in 1984). Many of his works are autobiographical, telling the story of a kid who quit school at age 16 to become a cowboy. He’s come a long way, pard.

THEY DO A BIT OF EVERYTHING…

Jim Dunham
A top gunman from Georgia? No one will believe it (will they, Doc?). Actually, Jim is a man of many parts. For example, he can draw Charlie Russell-like art while performing as Russell, presenting the great man’s own words (which were, and are, remarkably funny). While Jim paints a Russell imitation, his partner, Doc Stovall, entertains the crowd with cowboy songs and poetry. Jim is also an expert pistol handler, and he tells audiences some wonderful behind-the-scenes stories of movies that he’s worked on, including 1993’s Tombstone.

Sourdough Slim
So where can you witness a man in a 10-gallon hat yodel, play accordion, two-step and twirl a lariat—all at the same time? Wherever Sourdough Slim is playing, that’s where. Slim, a.k.a. Rick Crowder, has been doing the act since 1988 for audiences in diverse places such as New York’s Lincoln Center and Elko, Nevada’s National Cowboy Gathering. Oh, and he knows his stuff when it comes to the music, culture and history of the West.

Marshall Trimble
Okay, so you know him as True West’s answer man on all things Old West, or as Arizona’s official historian. But Marshall has been a musician for more than four decades, and during that time, he’s tossed in his own brand of humor and storytelling and poetry. In fact, more than once the guy has been compared to Will Rogers. So if you’re looking for Western entertainment, just ask the Marshall.

Great American Wild West Show
Don Endsley was the top rodeo announcer back in the 1980s when the Houston Livestock Show asked him to gather some Western entertainers for the event. It was such a success that state fairs and rodeos from around the country asked him to do the same for them. By 1996, Don’s work had evolved into the Great American Wild West Show. It’s the son (or daughter) of Buffalo Bill’s enterprise, traveling around the U.S. with a variety of trick shooters and riders—and just like Col. Cody’s extravaganza, a highlight is the rip-roaring stagecoach robbery. Don keeps his pipes in shape even today—he’s the official announcer for the troupe.