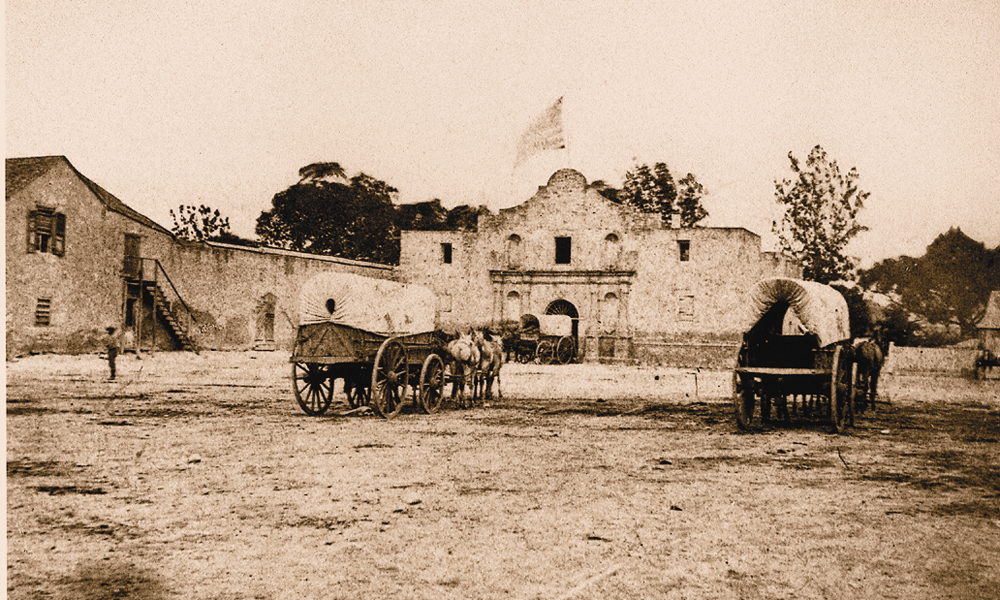 Only weeks after the 13-day siege and battle, contemporary newspapers provided conflicting accounts of what happened at the famous mission-fortress. And in the years that followed, painters, poets, writers and filmmakers provided multiple interpretations of Texas’ memorable 13 days of glory.

Since the Texas Sesquicentennial in 1986, however, a new wave of Alamo scholarship has attempted to more accurately describe the story of the Alamo. The research continues but, Alamo myths are resilient. What follows are a few of the biggest, best, and baddest, finally put to rest.

Myth: Travis and “The Line” Near the end of the 13-day siege Alamo commander, Col. William B. Travis, called the defenders together and drew a line in the sand with his sword asking the garrison to cross the line and join him. And they did, save one, as the story goes.

Fact: An Alamo escapee, Louis Rose, made it to Zuber’s house and supposedly told the tale of Travis’ line to Zuber’s parents who later told young William. In 1877, Zuber admitted he had made up the part about Travis’ speech.

Myth: There were 180 defenders.

Fact: Yes there were. Plus about 60 others. Most post-battle Mexican accounts all report 240 to 260. The famous 182 number comes from Tejano José Ruiz’ body count which included only the Texian dead inside the Alamo. There were at least 60 dead near the Gonzales Road. Adding the two numbers, the figure begins to look more like the Mexican report. One other thing: the final Mexican death count was something like 60. Sorry.

Myth: The Hopeless Alamo The outlook seemed hopeless for the defenders of the Alamo.

Fact: Not quite. A letter dated March 1 and written by R.L. Williamson in Gonzales stated that “we await some 300 reinforcements. For God’s sake hold out until we can assist you.” The letter arrived March 3, no doubt raising their hopes.

Fact: In 1955, the papers of Mexican officer José Enrique de la Peña, who served in Gen. Santa Anna’s army, surfaced. In the papers, de la Peña stated that Crockett and a few other defenders “had survived the general massacre” but were executed upon Santa Anna’s orders shortly after the battle had ended. Several other contemporary accounts support de la Peña, but this still remains the biggest dogfight among Alamo historians.

Myth: The Death of Jim Bowie On the morning of March 6, 1836, Jim Bowie supposedly rose from his sick bed and dispatched several soldados with some Texas-sized slashes from the unique blade that bears his name.

Fact: The rugged adventurer may have already been in the hands of death before the Mexican bugle calls signaled the attack. Several weeks later, survivor Susanna Dickinson recalled that she saw Bowie’s body. “His remains were mutilated.” But would Mexican soldiers mutilate a dead body in a bed? Perhaps Bowie fought to the last after all.

Myth: The Alamo’s Sole Survivor The Alamo’s most legendary male survivor is Louis Rose, allegedly the only man who refused to stay and fight with his comrades.

Fact: This tale is suspect since the story of his departure from the Alamo is directly related to the 1873 tale William P. Zuber told about Travis and his famous line. There were a number of Alamo survivors besides Susanna Dickinson, the wife of Alamo an artillery officer. As a matter of fact, at least 20 people survived the March 6, 1836 assault, mostly Tejano women and children, but a few men survived, also.

Myth: The Enduring Alamo “Hump” The facade of Alamo’s church looks the same today as it did during the siege.

Fact: At the time of the battle, the top of the ruined church was essentially flat across the front. The roof had fallen in long before the arched facade was added to the famous mission-fortress by the United States Army in 1850. Assistant Quartermaster Major Edwin Babbitt supervised the construction—yes, Babbitt “taco-belled” the Alamo.