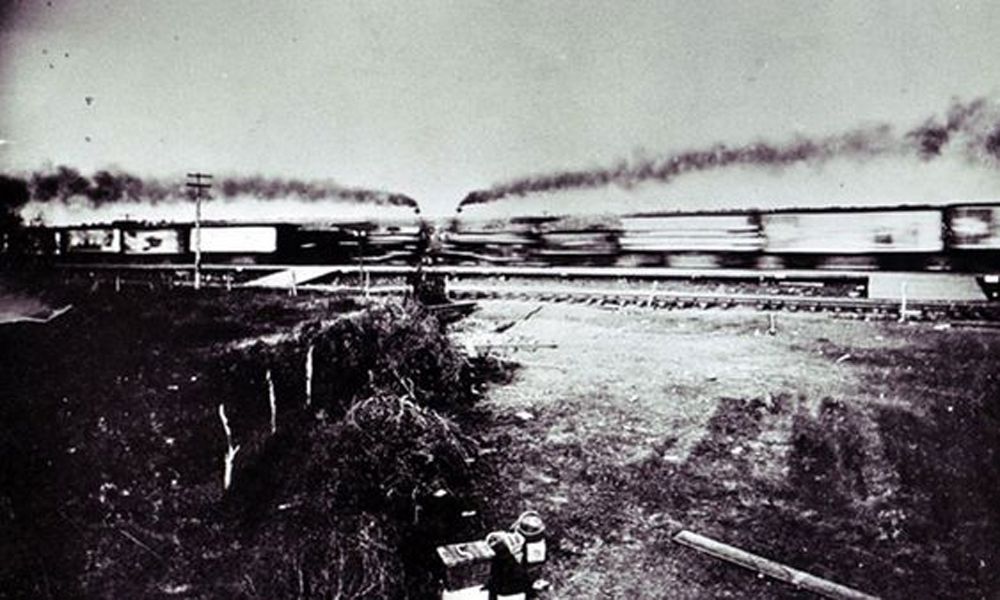 Some list this story under “Canadian folklore.” Others think it’s scary but fake. Author Barbara Smith, include it in her “Ghost Stories of Alberta.” Some, like columnist Ken Liddel of the Lethbidge Hearld, interviewed someone in 1966 who knew the details.

Here’s the thing: Everyone agrees on the ending; it’s the story leading up to the ending that is so freaky and so in dispute.

But S. E. Schlosser claims he saw it with his own eyes and gives a pretty detailed account of a spooky story that began in May of 1908.

Schlosser says he was a train fireman back in those days and was scared out of his wits in May of 1908 when he and an engineer he identifies only as Twohey [Bob Twohey], were startled to see the blazing light of an approaching train three kilometers out of Medicine Hat, Alberta. Since there was only one track, Schlosser thought he was about to die. But at the last second, the train veered to the right and he watched as the train—not on any track and not even touching the ground—roared by, “the passengers staring at us through the windows.”

Back to Version A with Schlosser. He claimed it was enough of a fright that Towhey took time off and worked in the yard.

Version B has Towhey doing the same thing, but adds that he was so disturbed, he consulted a fortune teller, who told him he was to die soon.

In Version A, Schlosser says he carried on, and a few weeks later, working with an engineer named Nicholson [J. Nicholson], it happened again. Same place, just outside Medicine Hat. Same train coming at them head on. Same veering to the right at the last second. Same passengers staring at the startled men.

That was the final straw for Schlosser, who took up yard work for a couple months before he went back to his fireman job on another train.

Here’s what his Version A says happened next: “I was firing up an engine in the yard one evening in early July when the report of an accident came in. The Spokane Flyer and a Lethbridge passenger train had a head-on collision in the single track three kilometers outside of Medicine Hat, on the exact spot where the Ghost Train had appeared The Lethbridge locomotive had derailed and its baggage car was destroyed. Seven people were killed in the accident, including the two engineers. One was my buddy Twohey, and the other was Nicholson.”

Liddel’s column, Version B, gives even better details: “On the morning of July 8, 1908, J. Nicholson boarded the same locomotive that he had operated with Day several nights earlier, the night on which he witnessed the ghost train. He was accompanied by H. Thompson, a fireman; Gus Day, who was usually the fireman on that locomotive, had been assigned to yard service. Just as before, the locomotive was scheduled to travel east to Dunmore, couple with the Spokane Flyer, and head west into the Crows Nest Pass.

“When the train was about 100 yards from the location on which the phantom train had been spotted on two different nights, another train appeared around the bend. This time, however, it was daylight, and it was for real. The oncoming train was the No. 514 passenger train from Lethbridge, and the engineer at the throttle was none other than Bob Twohey, who had overcome his fears and returned to work.

“In the ensuing crash, both engineers, Twohey and Nicholson, died on impact. A fireman named Gray and a conductor named Mallet, both crewmembers of the inbound passenger train, along with seven of the passengers, were also killed in the crash.”