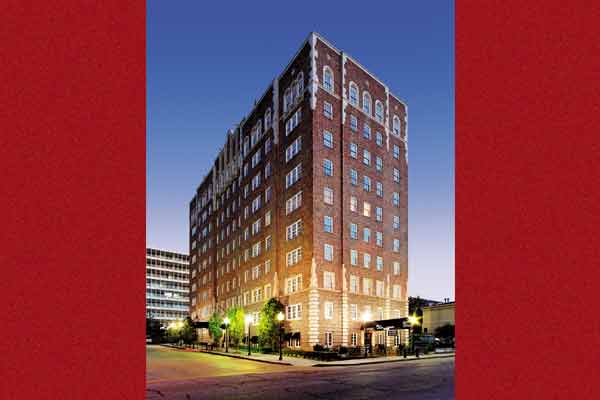 Oklahoma’s first apartment-hotel was built by Patrick J. Hurley, who went onto became secretary of war under President Herbert Hoover and, later, an emissary to Russia and ambassador to China.

The Ambassador Hotel, which opened its doors in 1929, was built mostly to serve as temporary quarters for some of the state’s newly wealthy oil barons while their mansions in the nearby Maple Ridge neighborhood (now a historic district) were under construction. Today, the hotel offers 55 rooms, eight of which are suites.

The Ambassador is still noted for its “seamless marriage of historic splendor and modern luxury,” says sales administrator Tiffany Shepard, who cites its European-inspired décor and Mediterranean-style architecture, particularly in the lobby, which features high ceilings and a handsome fireplace.

The Chalkboard Restaurant, in the lower level of the hotel, features a European-style bistro atmosphere. The menu, which changes seasonally to take advantage of the freshest meats and produce, is complemented by an extensive wine list. Beef Wellington is a specialty at the Chalkboard, along with steelhead trout and Colorado rack of lamb. Shepard particularly recommends the White Chocolate Bread Pudding. The bar is noted for its special holiday drinks, such as peppermint martinis.

Just a little more than a mile away, you can view Indian artifacts and works of art collected by Eugene B. Adkins, including those created by Maynard Dixon, Charles M. Russell, Joseph Henry Sharp and Maria Martinez, at the remarkable Philbrook Museum of Art.