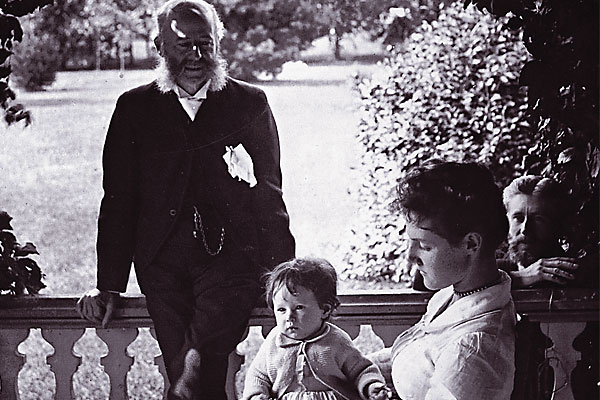 Determined women are responsible for two of America’s most revered holidays.

From the East came the push for a national Mother’s Day, while from the West came the campaign for Father’s Day.

The names of the women who made these holidays happen may have largely been forgotten, yet they leave a rich legacy. And one of them wrote perhaps the most beloved American anthem: “The Battle Hymn of the Republic.”

The creation of a national Mother’s Day—a half-century before Father’s Day—was an idea that started festering in the heart of Julia Ward Howe as the Civil War was coming to an end.

Julia was born in New York in 1819 to a well-off, strict Episcopalian family.  Her mother died when she was a girl, and she was raised by a more liberal-minded uncle who guided her into becoming a young woman with liberal religious and social ideals.

At 21, she married reformer Samuel Gridley Howe, a radical Unitarian who believed in the value of every individual and manifested that by working with the blind and mentally ill. He did, alas, have one blind spot: he thought a woman’s place was in the home, and there’s where he hoped Julia would be content with the six children they brought into the world.

But she wasn’t. She found an outlet in writing poetry and devoting herself to the anti-slavery and suffrage movements. (She would become the first woman elected to the American Academy of Arts and Letters.)

On a trip to Washington, D.C., to visit President Abraham Lincoln in 1861, she visited a Union army camp and was struck by the strong marching beat of “John Brown’s Body”—a song sung both in the North and the South, but in the North, it celebrated the abolitionist, while the southern version derided him.

The next morning, a poem began forming in her mind. She grabbed the stub of a pen and scrawled the first few lines of what would become perhaps the most famous poem in American history:

Mine eyes have seen the glory of the coming of the Lord; / He is trampling out the vintage where the grapes of wrath are stored.

She wrote six stirring stanzas to “The Battle Hymn of the Republic,” a song which is sung with a heart full of patriotism to this day as the unofficial anthem of the Republican party. It was first published in Atlantic Monthly in February 1862. She was paid $5.

History would forget Howe for creating the rousing poem, just as it would forget her 1870 mission to create Mother’s Day for Peace, a day she envisioned as a “worldwide protest of women against the cruelties of war.” Again, she penned a rallying poem to present her point:

Arise, then, women of this day! / Arise all women who have hearts whether your baptism be that of water or of tears!/ Say firmly: ‘We will not have great questions decided by irrelevant agencies, / ‘Our husbands shall not come to us reeking with carnage, for caresses and applause. / ‘Our sons shall not be taken from us to unlearn all that we have been able to teach them of charity, mercy, and patience. / ‘We women of one country will be too tender of those of another country to allow our sons to be trained to injure theirs.’ / From the bosom of the devastated earth a voice goes up with our own.  It says, ‘Disarm, Disarm!’

In 1872 and for several years after, Mother’s Peace Day observances were held, both in the United States and abroad. But then Howe’s idea floated away. She died in 1910, just as a new voice was taking up the idea of Mother’s Day.

A schoolteacher named Anna M. Jarvis is credited with the modern Mother’s Day we now know.

Anna was born in 1864 in Grafton, Virginia, the ninth of 11 children. Although never a mother herself, she envisioned Mother’s Day to honor her own mother, also named Anna Jarvis.

On May 10, 1908, the anniversary of her mother’s death, churches in Grafton and Philadelphia celebrated the first Mother’s Day. In 1910, the governor of West Virginia proclaimed the second Sunday in May as Mother’s Day; within a year, every state and territory celebrated it. President Woodrow Wilson finally proclaimed Mother’s Day an annual national holiday in 1914.

Among the traditions Jarvis started was wearing a colored carnation if your mother was alive or a white carnation if she had passed on. By the time she died in 1948, the International Mother’s Day Association she’d organized had spread to more than 40 countries.

By then, though, Jarvis was sickened by the commercialization of the holiday, with the fortune it meant in greeting cards and flower sales (Hallmark reports well over 100 million Mother’s Day cards are sold each year). “I wanted it to be a day of sentiment, not profit,” declared Jarvis, as she told a reporter she was sorry she’d ever started Mother’s Day.

Sonora Louise Smart Dodd was sitting in her church in Spokane, Washington, the second Sunday of May in 1909 as the pastor celebrated Mother’s Day for the first time. While listening to the sermon, her thoughts drifted to her father, who had raised six children after his wife died in 1898. If there’s a Mother’s Day, why not a Father’s Day, she thought to herself.

Sonora was the eldest of William and Ellen Smart’s children. She was 16 when her mother died while giving birth to the sixth child. Sonora would later say she realized that day the enormity of the hardships that her father would face. She also must have known that it was likely he would turn the child rearing over to her. But he never shirked his responsibility. She testified that he raised the children with “devotion and endless sacrificing.”

As she listened to the Sunday sermon, she became determined to show the world how much she appreciated her father’s love and care—and to honor all fathers who tend to their families.

Her father had fought in the Civil War with the First Arkansas Light Artillery.  After the war, he moved his family out west, looking for a better life, and farmed in Washington.

Sonora drew up a petition recommending a national father’s day and found instant support from the Spokane Ministerial Association and the local Young Men’s Christian Association (YMCA). She wanted the holiday cele-brated in June, the month of her father’s birth. Through her efforts, Spokane celebrated the first Father’s Day on June 19, 1910.

Political leaders such as William Jennings Bryant supported her cause (although some politicians actually ridiculed the idea of honoring men for their work at home rather than at the office).  With the public, however, the idea was very popular. By the time William Smart died in 1919, Father’s Day was a popular occasion in the country.

But it wasn’t an official holiday, not for decades. In 1924, President Calvin Coolidge supported the idea of a national day to recognize fathers, but he didn’t make it official. President Lyndon Johnson was the one who finally signed a presidential proclamation in 1966 declaring the Third Sunday of June as Father’s Day. Father’s Day became a permanent national observance in 1972 when President Richard M. Nixon signed it into law.

Sonora died in 1978. Besides her tireless efforts to commemorate Father’s Day, she is remembered for her artwork and children’s book on the Indians of Spokane. For her contributions to society, a monument stands to this day in her honor at the Spokane YMCA.

Three determined women from the past have helped us all remember each year to honor our fathers and our mothers.