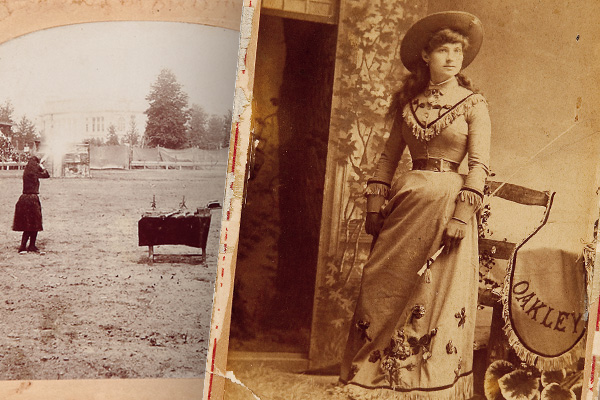 When Brian Lebel first told me how excited he was about the Annie Oakley collectibles that would be featured at his auction this year, I knew collectors would be in for a rare treat.

Oakley remains every much an icon today, as she was, 125 years ago, when she traveled across the Atlantic to land in London with Buffalo Bill Cody’s Wild West troupe in March 1887. More than two-and-a-half million people came to see the show commemorate the Queen’s Golden Jubilee that June. The crowds loved Oakley; even Queen Victoria remarked to her, “You are a very, very clever little girl.”

This past June, collectors got the opportunity to bid on the sharpshooter’s firearms and photographs at not just one, but two major auctions—Heritage Auctions on June 10 in Dallas, Texas, and Brian Lebel’s Denver Old West on June 23 in Denver, Colorado.

“Annie Oakley continues to fascinate for many of the same reasons that captivated audiences in her own time,” says Dr. Paul Fees, the former, long-time curator for the Buffalo Bill Historical Center in Cody, Wyoming. “She had come from extreme poverty. She was petite and pretty and always feminine, yet she beat men at their own game. She and Frank enjoyed a secure and very modern marriage. She was the star, and he the manager, but they were mutually supportive.”

The Oakley auction highlights featured on these pages include her “first real gun” and a rare arena shot of the sharpshooter in her heyday.