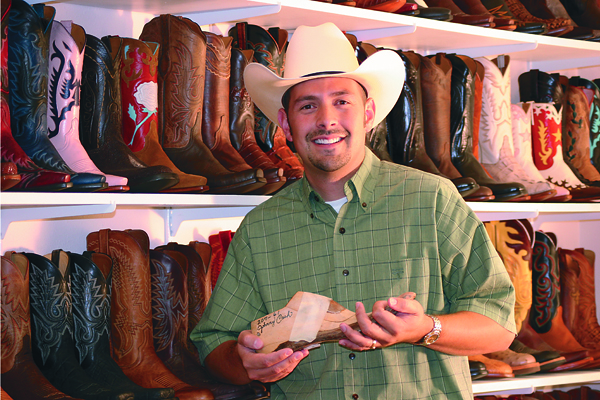 Some of the biggest names in Western Wear, including companies that were once archrivals, are tied to Arena Brands of Garland, Texas. One would be hard put to find another such company so dedicated to preserving the cowboy fashions of yesteryear.

When John B. Stetson of New Jersey built an empire with just $100 in 1865, he probably never figured that a later-day competitor of his, Byer-Rolnick, would own the rights to his famous “Boss of the Plains” hat. But the beginnings of Arena Brands, which now makes hats from both companies, are traced to Michigan millionaire E.R. Byer and hatmaker Harry Rolnick. They teamed up in Dallas, Texas, in 1927 to produce felt hats in Western and Dress stylings called Resistol Hats (because they could “resist all weather”).

It was Levi Strauss who changed the company’s name to Resistol Hat Company when Keracorp Industries, which bought Byer-Rolnick in 1968, merged with the leading jean maker in the West. But Levi Strauss sold the company to Hat Brands in 1985; two years later, Hat Brands bought Stetson, bridging the competitive gap between the two Western hat brands and allowing them to thrive under the same management.

Five years later, Arena Brands was formed and the company made the first purchase that set off a whirlwind of fashion pickups that would tell the world this was one company that’s betting on the West: Hat Brands. Owning more than just Resistol and Stetson, the company also produced Charlie 1 Horse and Dobbs dress hats.

The next Western-oriented company Arena bought was Montana Silversmiths, a maker of buckles, jewelry and watches, in 1994. Arena then wanted to pair up its quality Western hats with another historic name in Western Wear history: Lucchese. So, in 1998, it bought the company that Italian-born Sam Lucchese started in 1883, after making his way to San Antonio, Texas, and seeing an opportunity to craft boots for soldiers at Fort Sam Houston.

Today, Arena’s core business remains the Lucchese and renamed RHE Hatco divisions. Western wear wouldn’t be complete if it wasn’t for Arena still turning out the time-tried designs of John B. Stetson, Byer-Rolnick and Sam Lucchese.

Gary Rosenthal, senior product development and designer for Stetson hats, can’t imagine working anywhere else. His father was a hatmaker, as was his father and so on. At 14, Gary swept floors for Stephens Hats, his father’s business in St. Louis, Missouri. It was originally run by his grandfather, who started the company in 1917 with the Pitluck family. When Gary got out of the Navy in 1956, he worked full-time in the hat field. His son joins him now at Hatco, working as the felt plant manager. Gary is especially proud that the company owns its own raw felt plant in Longview, which allows Stetson to control the quality of the hats from start to finish.

Lucchese has maintained its quality, as well. Sam Lucchese’s innovative “twisted cone” last design remains unbeatable in the boot industry today, says Fred King, marketing director for Lucchese and Stetson, as well as archivist for Lucchese. The design is so true to the anatomy of a foot that it makes wearers of Lucchese boots feel like they’re slipping on a pair of socks. It’s no wonder stars such as Kevin Costner, Jewel, Britney Spears, Tim McGraw and Tommy Lee Jones have picked Lucchese as their boot of choice.

Thanks to Arena, today’s cowhands can still own a Stetson and stomp around in Lucchese. Gary, for one, is proud to be a part of a company that is keeping historic styles alive. “The Old West was a time when you had to pull yourself up by your boot straps … a time when you told it like it was,” he says, adding, that’s why “the glamour of the Old West is still captivating to this day.”