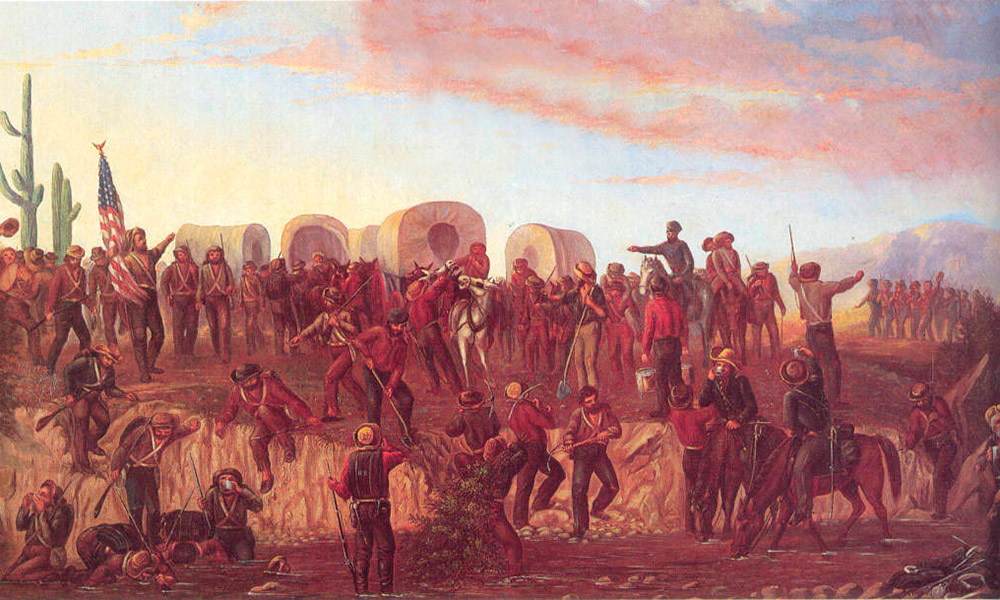 When war broke out with Mexico in 1846 the prize the United States hoped to gain was California. To accomplish the mission the Army of the West was dispatched from Fort Leavenworth, Kansas to capture Santa Fe then advance across the wilderness that would one day become Arizona and raise the Stars and Stripes over California.

In late September, 1846 the army under the command of Colonel Stephen Watts Kearny left Santa Fe bound for California.

A second column in Kearny’s Army was made up of Mormons that had been recruited in Council Bluffs, Iowa to build a wagon road from Santa Fe to San Diego. The volunteer group of citizen soldiers was placed under the command of a professional cavalry officer named Captain Philip St. George Cooke. The outfit amateur citizen-soldiers was in need of a stern disciplinarian and Cooke, an imposing man of six-feet-four-inches was the perfect officer to take up the mission. (no pun intended)

On October 21st, 1846, 448 men and five women, wives of officers or sergeants carried on the roll as “laundresses,” the Mormon Battalion set out for California. Before they got out of New Mexico 58 ailing men were mustered out as unfit for duty. When finished the Mormons would have marched 2,000 miles making it the longest infantry march in American history.

Just west of today’s Bisbee they picked up the San Pedro River where they found an abundance of wildlife including wild bulls left behind when the Apache drove the Mexican rancheros out in the 1830s.  These bulls were so wild even the Apache wouldn’t tangle with them.

They followed the river downstream on the morning of December 11th near today’s Fairbank the battalion found themselves being stalked by a band of wild bulls who took exception to the intrusion of their little river valley.

The men loaded their muskets and prepared to defend themselves as the animals, described as meaner than grizzly bears, became more menacing.

Sergeant Tyler described what happened next:

“In the open ground, where the cattle could see us from a distance, they would run away, but when near us, whether wounded of not, they were the assaulting party…..One small lead mule in a team was thrown on the horns of a bull over its mate on the near side, and the near mule now on the off side and next to the bull, was gored until he had to be left with entrails hanging a foot below his body……Some of the men climbed upon the wheels of the wagons and poured a deadly fire into the enemy’s ranks. Some threw themselves down and allowed the beasts to run over them; others fired and dodged behind mexquit (sic) brush to re-load their guns while the beasts kept them dodging to keep out of the way. Others, still climbed up in small trees, there being now and then one available.

“Brother Amos Cox was thrown about ten feet into the air, while a gore from three to four inches deep and about two or three in depth was cut in the inside of his thigh near its junction with the body.

“Albert Smith, quartermaster sergeant of company B., was run over by a wounded bull, and, I understand, had three of his ribs partially severed from the back bone. He suffered severely for several weeks, but declined going on sick report to avoid Dr. Sanderson’s cure-all calomel and arsenic”

Another fired six balls into a bull that was pursuing. Each time he fired the animal went down then got up and came after him again until the final shot brought it down for good.

Another bull fell wounded near one of the butchers, Robert Harris. He ran over to cut the animal’s throat but when he bent over the bull sprung to his feet, swung a horn around taking a swipe at Harris’ head. Instead it caught his butcher’s cap on the tip and ran off with it.

In the midst of battle Harris was chasing the bull shouting, “Stop you thief!”

He chased the animal some 75 yards before it gave up the ghost and fell to the ground—-and his butcher’s knife.

“I was very near Corporal Frost, when an immense coal-black bull came charging upon us, a hundred yards distant. Frost aimed his musket, a flint-lock, very deliberately, and only fired when the beast was within six paces; it fell headlong almost at our feet.”

When the bull began his charge Cooke ordered Corporal Frost to run for his life, calling him, one of the bravest men he ever knew.

The “battle” raged for about an hour before the bulls finally retreated into the brush. It was estimated that some 80 of the animals were either killed or died later of their wounds.

Poet, Levi Hancock also composed a poem about the battle. One of the verses read:

The Colonel and his staff were there,
Mounted, and witnessing the war;
A bull, one hundred yards away,
Eyed Colonel Cooke as easy prey.
But Corp’ral Frost stood bravely by,
And watch’d the bull with steady eye;
The brute approach’d near and more near.
But Frost betray’d no sign of fear.
The Colonel ordered him to run—
Unmov’d he stood with loaded gun;
The bull came up with daring tread
When near his feet, Frost shot him dead.

During the excitement, Lieutenant George Stoneman, who would later become a general during the Civil War nearly shot off his thumb with his own rifle.

Afterwards the battalion moved farther down the river, coming to a little stream which Cooke named “Bull Run,” and writing in his journal afterwards, he described the incident itself as the “Battle of Bull Run.” Little did he know at the time that his description anticipated history by some fifteen years.

Man of War and Peace