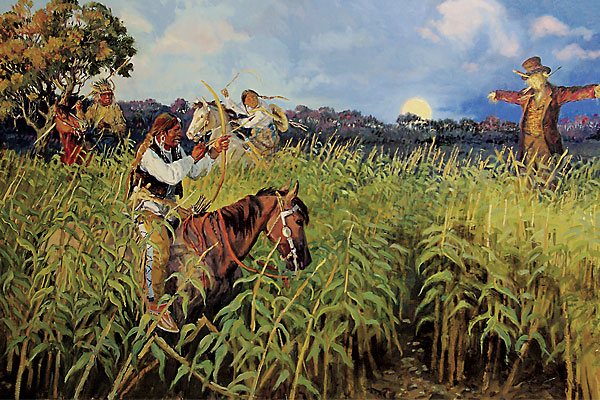 Others may call Dave Powell the reincarnation of Charlie Russell, but we see a modern, if traditional, man with a new vision for cowboy art.

That vision is the “Code,” a sense of the soul of cowboy culture which Dave feels strongly must be preserved.

“The Code is so important; it’s not figured out, it’s not written down, it’s just kind of a philosophy of the cowboy arts,” he says. As an active member of the Cowboy Artists of America (CAA), he believes the job of cowboy artists is “not about painting pretty pictures or painting pictures that sell for a lot of money, it’s about the heart. It’s about the Western soul—the soul of the livestock, the cattle and horses, and the culture that goes with it.”

This October 14-15 is the CAA’s 46th art show, an event that has, in recent years, been held at the Phoenix Art Museum. The show has moved back to its first home, the National Cowboy & Western Heritage Museum, in Oklahoma City, Oklahoma. Dave is sorry to see the event leave Phoenix, Arizona, but he’s happy that it’s back home in Oklahoma City. “I guess I’m just kind of tied to tradition,” he says.

Dave grew up the son of artists Nancy McLaughlin and Ace Powell. As a youngster raised in Agpar, Montana, where his father worked as a packer at Glacier National Park, Ace met Charles M. Russell at his summer home, Bull Head Lodge. Russell encouraged Ace to become an artist.

Just like his father was mentored by America’s leading cowboy artist, 57-year-old Dave has watched over this generation’s young men who share that same desire to chronicle the West. Dave believes mentoring those young artists is as important as his own work. That’s not the least of the reasons why we love him.