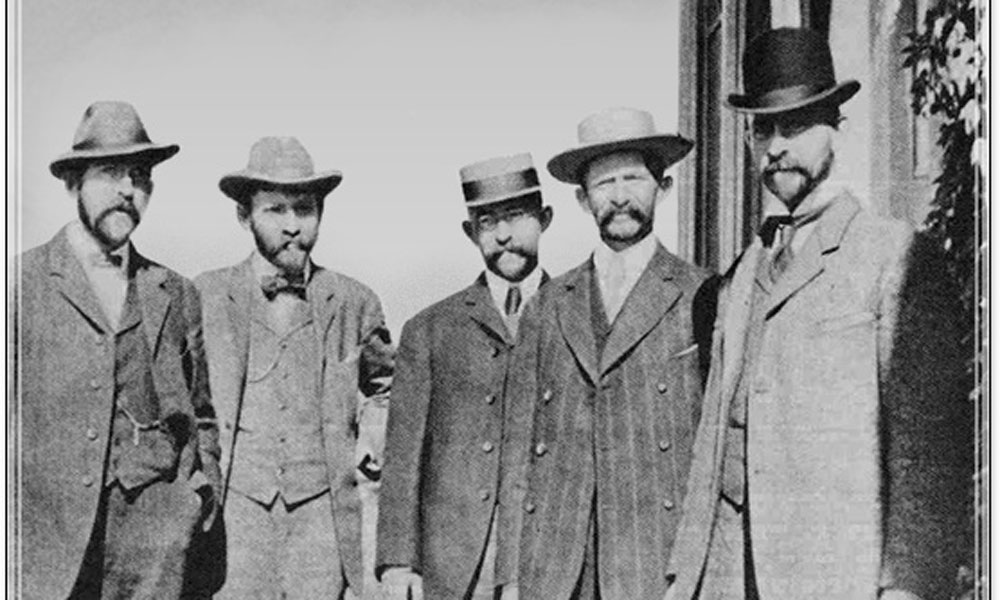 It was a cold, wet February morning in 1886 when Dave and Billy Babbitt stepped down off the passenger train in the raw, boisterous town of Flagstaff.  Actually, there wasn’t much left as the town had been ravaged by a fire three weeks earlier.  The train depot was a converted boxcar.  Flagstaff at the time had a population of 600 and proudly boasted that it was professionally served by, “able lawyers, skillful doctors, honest preachers, and scientific gamblers.”  The town also had more saloons than all other businesses combined.  One saloon owner kept the peace in his establishment by sitting in a loft above the crowd, armed with a sawed-off shotgun.

Dave and Billy might have been a bit skeptical on this first visit, after all, they’d never heard of Flagstaff until a railroad clerk at Albuquerque told them it might be a good place to acquire a cattle ranch.  The two young men were representing themselves and three other brothers, George, Charlie, and Edward of Cincinnati, Ohio.  The five brothers were proprietors of a mercantile store and had become enamored with becoming cattle ranchers so they took their life savings and entrusted Dave and Billy with the task of finding a cattle ranch, “somewhere out West.”

The ranch land in most of the better-know areas was out of their price range. After a railroad clerk in Albuquerque suggested that since the Atlantic and Pacific Railroad had just completed the transcontinental line across northern Arizona there might be some rangeland less expensive they decided to go to Flagstaff.

The two brothers recovered from their initial shock they began to see the potential of raising cattle on the virgin grass lands of the Colorado Plateau. They planked down nearly all of their $20,000 and bought a ranch east of Flagstaff.  They needed a brand so they chose to stamp their cows with a CO and a bar, the letters for their hometown of Cincinnati, Ohio.

For the next few years, Billy and Charlie ran the cattle end of the business while the other brothers went into other ventures.  Three of the boys, Charles, Dave, and Ed had courted and married the lovely daughters of a wealthy Dutch merchant, Gerald Verkamp.  He admired the industrious work ethic of his son’s-in-law and gave them some sound business advice.  In a word, it was “diversify.” He knew the market for cattle speculative so he advised them to get into other businesses.  Soon the Babbitts were involved in everything from mercantile stores and trading posts to theaters, drug stores, and real estate.

Over the next few years the CO Bar became one of Arizona’s biggest outfits with ranging from Ash Fork on the west to the New Mexico border on the east, and from the Grand Canyon on the north to the Mogollon Rim on the south.  Billy and Charlie spent most of their time in the saddle, as active as any working cowboy.  They dressed like hired hands and often times were mistaken for range bums by their own employees.

The heyday of the Babbitt cattle empire was 1907 to 1919.  During those years they entered into partnerships, held in interest in, or financed most of the cow outfits in northern Arizona.  During the 40 years after the founding of the ranch in 1886, nearly a hundred ranches came under Babbitt management.  Usually the Babbitts put up the money and the ranchers supplied the management.  Small ranchers needed a partner with money and by and large the Babbitts were benevolent landlords, giving their partners almost unlimited credit.

The Babbitt’s were the first cow outfit in northern Arizona to run sheep on the same range.  By World War I they owned more than 100,000 of the wooly critters.

The brothers were always willing to invest in any business venture when they saw the potential.  An example was a mortuary.  They opened in 1892 with an operating partner whose only experience was that he was an ex-buffalo hunter.  In spite of the man’s dubious qualifications, the business prospered for years.

It was said, “God made northern Arizona, and then he turned it over to the Babbitts to run.” That might sound presumptuous but it is a fact that for more than five generations they “fed and clothed and equipped and transported and entertained and buried Arizonans, and they did it more efficiently and more profitably than anyone else.”