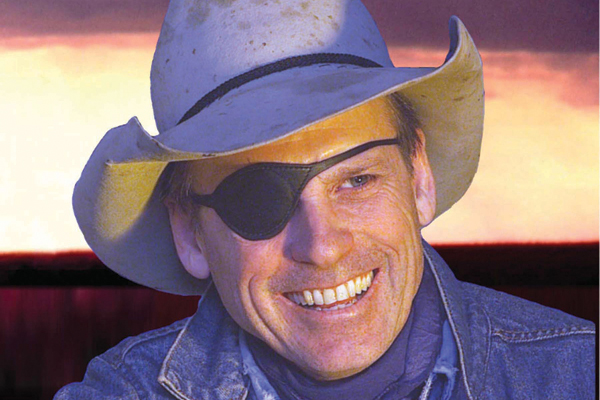 When your mailing address hasn’t changed for 100 years, your throwing game involves dried-up meadow muffins and your childhood sweetheart is calling you by the first name of a neighbor who is known far and wide for his childish temper, you are definitely a bona fide rancher.

But Ken Overcast doesn’t just live the life; he shares it through his music and stories. For instance, his latest syndicated column, “Meadow Muffins,” explains exactly why his wife of nearly 40 years, Dawn, was calling him a dirty name.

They were trying to brand “one old rip,” and Ken kept yellin’ from the chute that Dawn was letting the honky cow get by her. Well, if Ken could do it better … go right ahead. So he did. The result, he writes, “I got freight-trained and wound up with a perfectly coordinated wardrobe; Cow manure on the back & cow tracks on the front.”

Although he admits “stayin’ married to the gal you work cows with is a challenge,” without Dawn, Ken wouldn’t have so much fun at their ranch on Lodge Creek in north central Montana, 15 miles from where three generations of his and his wife’s families have lived before them.

Through music and writing, Ken shares the simple—and often humorous—Western lifestyle he and his family enjoy (they have a daughter Karlie, whose husband and four kids also live on the ranch).

On Bear Valley Records, he’s recorded eight CDs, produced by Russ Ragsdale, whose other clients include Trisha Yearwood, Tim McGraw, Bob Dylan and the Isley Brothers. Besides his column, Ken also pens short story collections and has a one-hour weekly radio show that airs on 60 network affiliates (you can also listen to webcasts from his website).

But it’s probably the “Three S.O.B. Rule” that keeps his ranching life afloat and allows him to share it with others. As a friend’s wife told him, once the husband says S.O.B. three times, she’s out of there.

That frustration meter is definitely good to have around a ranch.

“Just like throwing rocks, they go where you point.”

That’s what Bill Northrup’s mother told her diligent son when she first taught him how to shoot a pistol on a farm 20 miles from Cody, Wyoming.

The love for firearms that his parents, especially his father, have inspired in him has brought Bill back to Cody, where he and his wife Louise are the new owners of Ballard Rifle & Cartridge Company, which they bought in September 2005. Ballard manufactures American handcrafted replicas from the Civil War era through just after the turn of the 20th century, and the company’s custom rifles are offered in more than 100 cartridges.

Bill’s farm life gave him a well-rounded education on mechanical projects, he says. He overhauled his first engine at 13, worked in the oil patch to pay for pilot lessons and earn his B.S. in Aeronautical Engineering Technology. He eventually flew as captain for TWA and American Airlines, but then he met his wife Louise. The two of them spent 12 years as owners of a Research and Development company that specialized in the textile and steel industries. But when they learned of the opportunity to own Ballard, they had to take it.

Even their kids are hooked on the new family business. “Audrey shot a Buffalo Gong at 600 yards with a Ballard rifle, and it rang on the first shot … and Will loves shooting different objects at the farm’s shooting range,” Bill says of Audrey, 11, and Will, 9.

So what’s on the horizon for Ballard? “The most exciting project on the near horizon is the 1885 Low Wall. This will be a re-creation of the original and takedown (removable barrel) designs, especially crafted for ladies and younger shooters,” Bill says.

In the meantime, check out the company’s mainstays, the Ballard and 1885 single shot rifles, which have been favorites of shooters for more than 100 years. Bill tells us Ballard’s 1885 line includes a new Light Hunter (at 6.5 pounds) and an Express rifle that would make the famed game hunter Karamojo Bell grin from ear to ear.