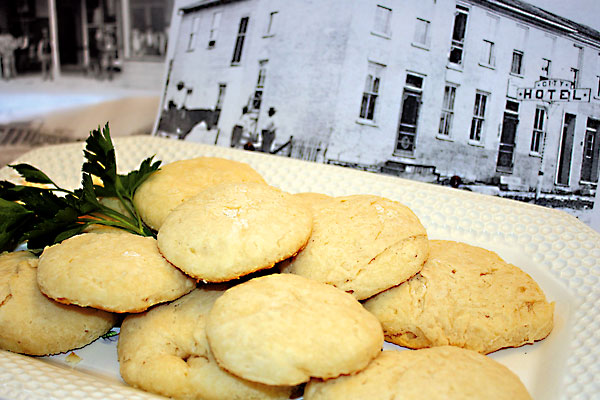 In 1834, Judge Joseph Huston converted his brick home in Arrow Rock, Missouri, into an inn to care for the thousands of pioneers who trekked west along the Spanish Trail every year.

Before him came transcontinental explorers Lewis and Clark, who had taken note of a cliff called Arrow Rock when they supplied themselves with salt from nearby springs. With ferry service available around 1815, the town got its start in 1829 and eventually became recognized for producing hemp and tobacco, which got shipped down the Missouri River to the cotton districts of the South.

By 1840, Huston was widely known as a hotelkeeper. One of the noted features of his tavern was a bell that rang for each meal, emergencies and for special events, like weddings.

The well-known Martin family did not hear the bells chime for their daughters’ weddings. In February 1894, the St. Louis Republic reported that Miss Myrtle “Pearl” Martin and Samuel Van Arsdall “Gave the old folks the slip” when the 20 year olds eloped to nearby Boonville after the bride’s parents, Gervis and Amanda Martin, objected to them marrying.

The thought of elopement must have left an impression on Pearl’s younger sister, because just five months after Pearl eloped, 16-year-old Corinne did the same. The Reverend A.M. Cockrell married her to Samuel’s younger brother, 19-year-old George Van Arsdall.

A couple of weeks after Corinne’s marriage, the reverend was charged for “illegally solemnizing” her marriage because the “license was procured in an adjoining county” and the “bride was under age,” reported the paper. “As elopers the Van Arsdalls are record breakers. A year ago an older brother of the groom ran off with and married an older sister of the bride’s…. In consequence of the parties interested being among the ‘first families’ of Saline, the outcome is looked forward to with the greatest interest.”

The minister was acquitted two days later when it was learned the couple far exceeded the legal marriage age of 12. The couples remained married and were together until death separated them.

Almost 30 years after the elopements, the Kansas City Star wrote about Arrow Rock’s tavern: “There are two lanterns in iron frames that lighted the doorway when Kit Carson was a visitor. Over the gray brick building, with its vine-clad walls, its old-fashioned flower garden …throughout the spacious high-ceilinged rooms with its quaint furnishings, hangs an atmosphere and charm that bespeaks the Old Tavern’s intimate relation with the past, of times when gay ladies and gentlemen made merry there.”

Today, the Missouri Division of State Parks watches over the tavern. It not only served as a hotel during its Santa Fe Trail days, but also as a restaurant, and the J. Huston Tavern has been serving meals since it opened. The featured biscuit recipe came from one of Arrow Rock’s early residents.

Sift the flour twice in a large bowl; remove one-third cup.
Sift the soda, cream of tartar and salt into the flour.
Cut in the shortening and then add the milk.
Stir just until incorporated.
Roll on a floured surface and cut into biscuits.
Melt 1 T. butter into each pan and add the biscuits.
Turn them over to coat with butter.
Bake at 375 degrees for 10-15 minutes or until golden.