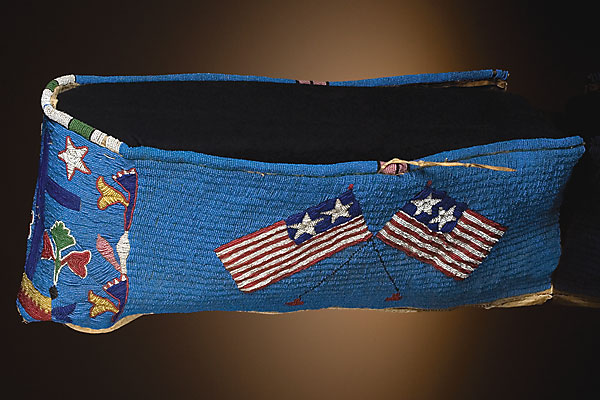 In the 1820s, Cherokees, Creeks and Seminoles in the Southeast created a flat bag suspended from a wide shoulder strap, a design copied from a cartridge belt that U.S. soldiers slung over their chests during the 18th century.

Known as a bandolier bag worn as a badge of status during ceremonies, it soon found its way to the frontier when Indians were forced west, beginning with the Indian Removal Act of 1830 passed during Andrew Jackson’s presidency.

“In the East, around the Great Lakes, these bags are common. But I’ve only seen a handful of these in the West,” said Donald Ellis, of Donald Ellis Gallery in Ontario, Canada, while appraising a bandolier bag during a Kansas City, Missouri, broadcast of PBS’ Antiques Roadshow in 2003.

Word of how valuable these bags are has definitely gotten around, as Cowan’s Auctions topped its September 16 sale with a Delaware bandolier bag, selling for a $100,000 bid. Relocated Delaware Indians found themselves in Kansas during 1829-32, and it is believed this bag was made in Kansas during 1830-40. It is similar to an 1838 bag acquired in Kansas exhibited in the Peabody Museum at Harvard University and a bandolier bag made and worn by a Cherokee woman prior to the Trail of Tears, which is
found at the National Museum of the American Indian.

The Delaware bag does not have any provenance connected to it, unlike one that hammered in for $110,000 at Christie’s in January 2005, which was owned by Seminole Chief Neamathla in 1835. But yet, in almost two years, the value of a bandolier bag originating in the West, regardless of provenance, has clearly risen.

The bags were definitely prized by Indians. Rev. Joseph A. Gilfillan, an Episcopal missionary to the Ojibwa on the White Earth Reservation during 1872-98, recalled in 1901, “One of the bead-work pouches is the great ornament of the Ojibwe, and any person wearing it is considered to be in full dress: it is worth a pony among the Sioux.”