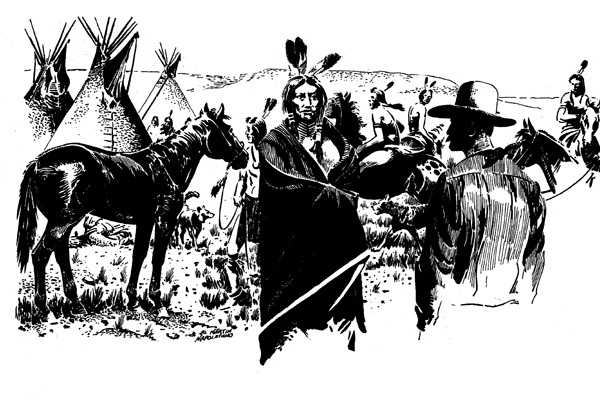 This is a story that George W. Bolds told me. In Dodge City he was known as “Cimarron George.” I made notes, wrote the story and have his corrections. He died four years ago. He was, for a time, a deputy United States marshal in Dodge City. James D. Horan wrote a book about him, but this story does not appear in the book, and is set down here for the first time.

This is the story—almost the way colorful “Cimarron George” told it. (I wish I could catch the rhythm of his voice and the laughter in his faded blue eyes.)

I guess you didn’t know that Bill Tilghman, one of the “Three Guardsmen,” liked race horses the way a coon likes persimmons. His specialty was to pick ’em up from the Indians who were mighty good judges of moving horseflesh. He bought one from a Kiowa Indian named White Deer-Horse; it was named “Chief.” Bill owned another horse named “Chant.” This animal won the Kentucky Derby in 1894. I guess that will come in the nature of a surprise to many people—Bill Tilghman owning a Derby winner!

I’ve known Bill Tilghman well. He was as fine a man as ever hung a holster around his hips. Here’s a trait I want to mention: he was downright shy around girls. Bad men didn’t make him even blink, but a girl gave him the shakes. Seems queer, but that was the way it was.

One day in the fall of 1883, he invited me to leave Dodge City and go down into the Indian Territory with him to attend an annual feast the Indians was gettin’ up. It appears they always had ‘em along in the fall of the year which, to Indians, is hoss racing time.

Bill heard about a Comanche Indian chief who had a fast black filly named Prairie Queen. Bill and I went to see her run. She was the fastest thing on four feet. When Bill saw her in action his eyes glowed like coals in a base-burner stove.

She was ridden by an Indian boy with only a hackamore—no saddle, no bridle. She could understand Indian. You know what I mean.

We saw her start in a field of 15; the Indian boy on her back, a hackamore over her head. She came in first.

When the race was over, Bill went to the Indian and said, “Chief, I want to buy Prairie Queen!” He glanced over to where the horse was standing.

The chief got a horse-blanket and spread it on the ground, him settin’ on one side, and Bill Tilghman on the other, facin’ each other.

“How much you pay?”  asked the chief. Bill done a little play-actin’. He took out his wallet and pulled out $50 and kind of hesitatingly spread it on the horse-blanket, as if the idea of letting loose of that much money was painful to him.

The chief looked at it a long time, then silently shook his head.

Bill’s hand went into his wallet again and came out with $10 more. By the look of agony on his face, you’d a thought he’d been bit by a prairie rattler.

Little by little the two got closer together in their bid-an’-asked. Finally, with a look of despair, Bill opened up his purse and put everything in it on the pile, then showed the purse to the chief. “That’s all I’ll give for her,” said Bill.

The chief nodded that he would accept.  Then he spoke to his son who disappeared and came back a few minutes later with his sister, who was a good-lookin’ Indian girl.  The chief spoke to her in Injun and pointed to Bill. The girl gave one look at Bill, then began to cry. That is, as near to cryin’ as she’d ever do, for most Indians don’t go around sheddin’ their emotions like wild cherry leaves.

Bill looked at her in astonishment, because he couldn’t see why the sight of him would maker her cry.

A tremendous argument took place between the girl and the chief. The chief kept pointin’ at Bill and evidently sayin’ something  which was complimentary.

Meanwhile, the girl was studyin’ him, then broke out with, “I don’t like him.” The chief said, “Why don’t you like him?”

“Me like Running Elk,” said the sufferin’ girl. “Me no want him,” she said pointin’ at Bill Tilghman.

The girl repeated what she’d said. Then the whole thing came to light. The chief’s daughter was also named Prairie Queen and the chief thought, that Bill was tryin’ to buy his daughter!

When the chief got it through his head, he made Bill add $10 to the deal; a horse, it seems, bein’ worth more than a daughter.

Bill led her away, “her” now referrin’ to the filly.  And that’s how Bill Tilghman got one of his race horses.