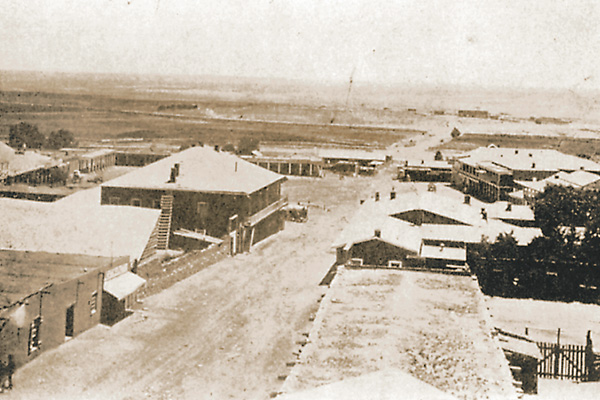 Ice and heavy snow has impeded travel over Northern New Mexico, but Sheriff-elect Pat Garrett is anxious to finish his task. If he can deliver his star prisoner—Billy the Kid—to Santa Fe, he will be eligible for a $500 reward.

Garrett is only 60 miles from his goal.

Besides snow and ice, Garrett has another problem—a mob has formed at the train station, and it wants another of the sheriff’s prisoners—Dave Rudabaugh.

“Dirty Dave,” as he is known among his peers, killed Las Vegas jailer Lino Valdez during an unsuccessful bid to free J.J. Webb in April. Rudabaugh escaped, then joined the Kid’s gang and was subsequently captured with Billy at Stinking Springs by Garrett and his crew of cowboys from West Texas (see sidebar, page 70).

The mob has captured the train crew and is holding them at gunpoint so the train can’t leave. Sensing the mob’s intention to lynch Rudabaugh, Garrett orders the shades in the car pulled down and warns the other passengers: “Any of you people who don’t want to be in it had better get out before I lock the car, as we are liable to have a hell of a fight in a very few minutes.” Two drummers (salesmen) immediately beat a hasty retreat to another car. Other passengers also depart, leaving two heavily armed prospectors from Montana, who are on their way to White Oaks, New Mexico. They tell Garrett they paid their fare and don’t want to get off, adding that they will help stand off the mob. Garrett welcomes them, and the prospectors pull their hardware and take up positions to defend the prisoners.

Two of Garrett’s deputies, James East and Tom Emory, go to separate windows and pick out the men they intend to shoot first. Later, East said, “I saw a big Mexican blacksmith who had a red shirt on. He was in the mob and had a double-barreled shotgun so big that you could have treed a prairie dog in it.”

Garrett asks Frank Stewart if he is ready to fight. Stewart replies he is ready. “Let’s make a good one,” Garrett says. He guards one end of the car while Stewart takes the other. The prisoners are ordered down on the floor so they can’t be shot through the windows.

Out on the platform, Sheriff Romero works his way to the front of the crowd and with five men behind him, jumps on the steps of the car. “Let’s go right in and take him out of there,” the men behind him shout.

Garrett meets Sheriff Romero on the coupling deck. “If you wanted them so badly,” Garrett says, “why didn’t you go out and take them?” (Meaning: where were you when we went out and captured these birds?)

“As soon as the first shot is fired we will unloose every man and arm him,” Stewart yells from the other end of the car. The threat is clear: Garrett  will unchain Billy the Kid and let him fight.

A reporter has slipped up on the opposite side of the train and gets the Kid’s attention. The reporter later wrote, “The prospect of a fight exhilarated him, and he bitterly bemoaned being chained. ‘If only I had my Winchester, I’d lick the whole crowd,’ was his confident comment on the strength of the attacking party. He sighed and sighed again for a chance to take a hand in the fight and the burden of his desire was to be set free to fight on the side of his captors as soon as he should smell powder.”

Sheriff Romero backs down the  railcar steps, and the crowd waits for a spark or a speck of courage from someone on their side to light the fuse.

Voices are heard from the back of the crowd. James East subsequently said, “three Americans heavily armed came down from the new town [East Las Vegas]. They were friends of ours. They were Jim McIntyre, George Close and a man named George Poindexter, a gambler there. McIntyre had been in the Texas Rangers. They came in behind the mob and that threw it between us and them, and that made the mob take notice.”

Just then, a bystander jumps into the engine compartment and hits the throttle. The train lurches down the tracks and the standoff is over.

The Man Who Saved The Day

Who was the man who jumped aboard the locomotive at the Las Vegas depot and ended the tense confrontation between Garrett and the mob of angry citizens who wanted to take Dave Rudabaugh off the train and string him up? Garrett—or his ghost writer, Ash Upson—said he was Deputy United States Marshal Mollay. Noted Billy the Kid biographer Walter Noble Burns called him a deputy sheriff and gave him the name Tom Malloy. By 1956, in Frazier Hunt’s The Tragic Days of Billy the Kid, he had become “J.F. Moley, a post office inspector who had once had some railway experience.” In a 1960 biography of Garrett, author Richard O’Connor, clearly taking his cue from William A. Keleher’s 1957 Violence in Lincoln County and in turn citing the January 1, 1881, Las Vegas Gazette, identified him as “Deputy Marshal J. F. Morrissey.” In his biography of Pat Garrett, Leon Metz correctly identified the man as J.F. Morley, but made him a deputy U.S. marshal. Historian Robert M. Utley finally got it right when he called him “a former railway engineer now working as a postal inspector.”

But why would a postal inspector risk his neck for Pat Garrett and a bunch of convicts?

The answer comes not from any modern researcher but from the forgotten letters of a man who was there—Jim East. In his later years as chief of police in Douglas, Arizona, East carried on an extensive correspondence with many of the men he had known on the frontier. One of these was J. Fred Morley, a county detective in Klamath Falls, Oregon. It turns out Garrett had sent for him to help out at Las Vegas, which suggests he was something more than a postal inspector and that Garrett knew he was reliable. But how he knew or where they had met, we do not know: only that on that December day, he did what had to be done.

On November 29, 1922, in response to a letter from East, Morley sent this account. It has never been published before.

“I arrived on the train from the South. Pat [Garrett] having wired me at Santa Fe and when I arrived the mob had the train crew cap-tured, you [East] will no doubt remember that I at once went on the train where Pat had the Prisoners. Pat told me he was going to cut the irons off the Boys and let them make a fight for there [sic] lives. I told Pat not to do anything until I could see what I could do. I went up to the residence of A.A. Robinson, Chief Engineer for the Santa Fe Railroad and asked him for a train crew to take the train out. Robinson told me I could have all the rolling stock of the Company but would have to Man it myself, and then after talking with Romero[,] at that time a Member of Congress for the Territory, also with the Alcalda, and each moment things were going worse, I told Pat I would pull the train out myself which I did.”

Jim East continued, “Morley sneaked into the cab and jerked the throttle open. He was a little excited, I guess, jerked it wide open, and the wheels spun around a few times but took hold and by the time we got to the end of the siding it seemed like we were going a mile a minute, and the Mexicans stood there with their mouths open. The engineer and fireman caught the train as it pulled out.”

“Do you remember,” Morley added, “that at Glorieta [Pass] on top of the Glorieta mountains we git [sic] a lunch for the Prisoners and how Billy the Kid showed us how far down he could bight [sic] on a piece of pie, you remember his long squirrel teeth.”

They reached Santa Fe “along in the night,” according to East. “We took the prisoners to jail and turned them over to the sheriff. The next day we reported to Governor Lew Wallace [who] had offered $500 for Billy the Kid, dead or alive, and that was paid. The citizens of Las Vegas made up eight or nine hundred [dollars] and Dr. Nowers of Santa Fe gave a hundred in gold. Some thirteen or fourteen hundred dollars was made up in all.” In spite of his pivotal role in the affair, it seems unlikely that J.F. Morley got any part of the reward.

• Dirty Dave and Billy almost succeeded in digging their way out of the Santa Fe jail, but the attempt was foiled by a snitch. The Kid was ultimately shipped to Mesilla for trial, convicted of murder and sentenced to hang. He escaped that fate only to be killed by Garrett in July 1881.

• Ironically, Rudabaugh was shipped back to Las Vegas and escaped from that jail. Legend says he made it safely to Mexico, where he was beheaded by an angry mob.

• We recommend: The Illustrated Life & Times of Billy the Kid, by Bob Boze Bell and The West of Billy the Kid by Frederick Nolan. Both books can be ordered at truewestmagazine.com or (888) 687-1881.