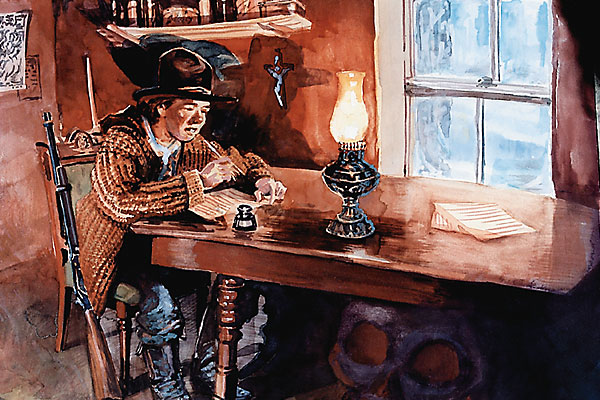 Bob Hargrove’s saloon at Old Fort Sumner, New Mexico, is packed with cowboys, including James Chisum, brother of John, and three of his cowhands. Chisum and his men have been invited to take a drink with Billy the Kid, who enters the saloon with them.

Joe Grant, a newcomer to the area,  notices the cowboys enter and snatches an ivory-handled pistol from Jack Finan’s holster while, at the same time, putting his own pistol in the cowboy’s holster.

Emptying his spent shell, the Kid remarks, “Unfortunate fool; I’ve been there too often to let a fellow of
your caliber overhaul my baggage. Wonder if he’s a specimen of Texas desperadoes.”

A bystander wonders aloud whether Grant has been killed and warns the Kid to watch out, but Billy smiles and says, “No fear, the corpse is there, sure, ready for the undertaker.”

Some scholars debate whether the Grant fight actually took place. Passed down by Jim Chisum’s son, the details of the shooting became part of the folklore around Fort Sumner and the “facts” in the case are mighty slim. Still, the fight has the ring of truth to many Billy scholars and is generally accepted as being a bona fide event because the Chisums are a trustworthy source; also the newspaper quote from Billy (see bottom of p. 68) helps to substantiate the shooting.

A former Fort Sumner resident, Pat Garrett, was elected sheriff in November 1880. He was backed by John Chisum with specific orders to “clean out that squad east of Sumner.” Garrett did just that, killing gang members “Chuck” Bowdre and Tom O’Folliard and capturing the Kid at Stinking Springs, east of Sumner, and delivering him to the authorities in Santa Fe.

The Kid was tried for the killing of Sheriff Brady, convicted and sentenced to hang, but he escaped, killing his two guards. He made his way back to Fort Sumner where he was subsequently shot to death by Sheriff Pat Garrett in Pete Maxwell’s bedroom on July 14, 1882.

Recommended: Pat F. Garrett’s The Authentic Life of Billy the Kid annotated by Frederick Nolan, published by the University of Oklahoma Press