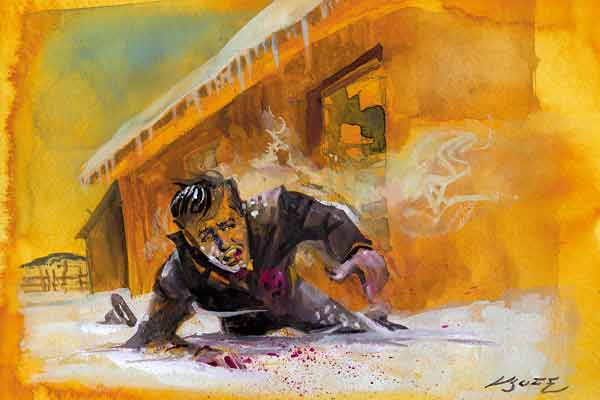 The cook at the Greathouse Ranch, Joe Steck, steps outside the main ranch house to harness a team of horses and encounters a bristling row of Winchesters. The leader of a White Oaks posse in New Mexico Territory, Will Hudgens, hands him a note that demands the men inside the ranch house give themselves up.

“I took the note in and delivered it to the one I knew to be Billy the Kid,” Steck later recalls. “He read the paper to his compadres, who all laughed at the idea of surrender.”

Accompanied by Jim Greathouse, Steck returns with the outlaw’s refusal. The posse decides to aim its pressure on retrieving Billy Wilson, who faces less serious charges than his cohorts, believed to be “Dirty Dave” Rudabaugh, Tom Cooper and as many as six others, including the Kid.

Fearing treachery, Wilson balks at coming out, but he does ask Jimmy Carlyle, a popular blacksmith known by both sides, to come in and discuss the terms of surrender. Hudgens agrees only after Greathouse offers to stay until Carlyle’s safe return.

Carlyle enters the house unarmed and finds himself a prisoner. The Kid is up to his old tricks and plans to make a break after dark. While the time slips away, the men inside allegedly drink heavily. Steck recalls the Kid forcing Carlyle to drink so much that by noon, he is “under the influence of liquor and insisting on going out.”

At about two in the afternoon, the posse issues an ultimatum: “Come out, or we will shoot Greathouse.”

The minutes tick by with no answer from inside. Then posse member Joe Eakers accidently fires his weapon. Hearing the report, Carlyle panics and leaps through a closed window, landing in the snow.

Steck was exiting the house at that moment. “I stopped and turned, when, crash, a man came through a window, bang, bang, the man’s dying yell, and poor Carlyle tumbled to the ground with three bullets in him,” he recalls.

The posse claims the shots that killed Carlyle came from inside, specifically from the Kid. (Later on, the Kid will claim otherwise.)

The posse members unleash all their firepower at the house, firing an estimated “60 to 70 shots.”

After another hour passes, the posse’s determination starts to fade. The crew is cold, hungry, thirsty and depressed by the death of their comrade, whom they can see clearly as his body stiffens in the snow.

Although couriers have gone out to White Oaks to seek reinforcements, the dejected posse decides to ride back and meet them instead.

After dark, the Kid, Wilson, Rudabaugh and the others warily slip out of the house and make tracks to another ranch house nearby.

Lead Up to the Greathouse Standoff

On November 15, Billy Bonney a.k.a. Billy the Kid, Tom Folliard, Charlie Bowdre, Billy Wilson, Tom Pickett, Buck Edwards and Joe (Sam) Cook steal 16 horses belonging to Padre Polaco (A. Grzelachowski). They head for White Oaks to sell the horses; the Kid also hopes to meet with his lawyer to discuss the possibility of going straight. On the way, the crew stops at “Whiskey Jim” Greathouse’s ranch and way station and sells four horses to Greathouse.

Five days later, the outlaws arrive in White Oaks and put their horses up at the Dedrick corral. They go to town and stock up on supplies, and leave without paying.

After Barney Mason tells Sheriff-elect Pat Garrett about the horse theft, he goes to White Oaks to inform the authorities there. Deputy William H. Hudgens raises a posse of eight men—among them J.W. Bell and Jim Carlyle—and attacks the Kid’s gang at their Coyote Springs camp. Taken by surprise, Bonney and Wilson have their horses shot out from under them. Hudgens’ horse is also killed. The posse scoops up the outlaws’ supplies including the Kid’s gloves and saddle.

A second posse, made up of some posse members from the Coyote Springs fight, tracks the fugitives to the Greathouse Ranch and surrounds it, setting the scene for the killing of Carlyle.

The Kid, along with Billy Wilson and Dave Rudabaugh, trudged through the snow back to the Pecos River. One story has them stealing horses in Anton Chico.

Three nights after Jimmy Carlyle was murdered, John Hurley’s Lincoln posse burned down all the Greathouse Ranch buildings. The same posse may have burned a neighboring ranch that allegedly also harbored Billy the Kid.

The Las Vegas Gazette’s December 3 editorial shifts public focus on the Kid: “The gang is under the leadership of ‘Billy the Kid,’ a desperate cuss, who is eligible for the post of captain of any crowd, no matter how mean or lawless…. Are the people of San Miguel county to stand this any longer?” The editorial spurs Gov. Lew Wallace to issue a $500 reward for the Kid’s capture.

From Fort Sumner, the Kid sent a letter to Gov. Wallace in Santa Fe, explaining his side of the Greathouse Ranch fight: “…a shot was fired on the outside and Carlyle thinking Greathouse was killed jumped through the window breaking the sash as he went and was killed by his own Party they think it was me trying to make my Escape.”

Not yet serving as the Lincoln County sheriff, Deputy U.S. Marshal Pat Garrett joined forces with Frank Stewart and a group of Texas cowboys to round up the Kid at Stinking Springs on December 23.