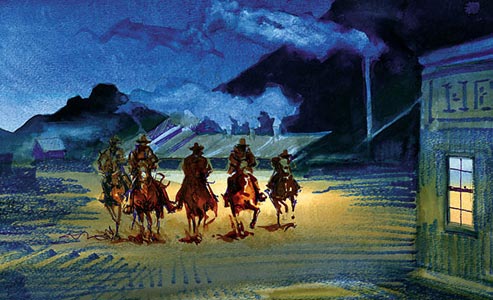 On a cold December night, five cowboys wearing heavy coats and masks ride up the gulch, past the Copper Queen smelter, and dismount at the east end of Preston’s Lumberyard in Bisbee, Arizona Territory.

Proceeding on foot, the men walk up Main Street until they reach the Goldwater-Castañeda store. Three of the outlaws go inside, while two stay outside, standing opposite each other by the door.

The element of surprise is short-lived. Within moments, the outlaws are being challenged by locals (the historical record is unclear on who fired first, or why).

A Bisbee resident, James Krigbaum, hears the shooting, buckles on his gunbelt and heads downtown. On the way, he hears reports that bandits are holding up the store and shooting at anything that moves. Krigbaum slips down an alley and takes up a vantage point behind a rock wall. As he peers over, he sees two men, armed with rifles, firing at unseen adversaries. Krigbaum takes aim at the tallest gunman and fires, but he misses. His second shot merely grazes the outlaw’s coat. The outlaws return fire at Krigbaum’s position, and he ducks for cover.

The doors of the Bon Ton Saloon swing open, and assayer John Tappiner and Joseph A. Bright, of Willcox, step out on the boardwalk. One outlaw barks at the two men, “You go back!”

Bright runs up the street, but Tappiner defiantly declares, “I won’t.”

A rifle slug rips into his forehead, and he drops in the street.

Next to the Goldwater-Castañeda store is Joe May’s Saloon. A man named Howard steps out from its doors, and the outlaws gun him down as soon as he appears.

D. Tom Smith, a deputy sheriff from the San Pedro River area, exits the Simas Restaurant and identifies himself as a lawman. “You’re the man we are lookin’ for,” one of the outlaws retorts. The gang’s rifle fire strikes the deputy twice; the second shot kills him.

With three dead men lying on the street, the locals amazingly remain uncowed and keep coming. Annie Roberts, an expectant mother, exits her restaurant and is cut down. J.A. “Tex” Nolly, a Bisbee lumber dealer, is shot as he runs out of a nearby saloon.

Inside the Goldwater-Castañeda store, the three robbers have lined up all the customers and employees and are ransacking counter drawers and shelves. In a bedroom at the rear of the store, Jose Castañeda is lying on the bed, feigning illness, in an attempt to protect the cash he has hidden beneath his pillow. His ploy fails. A robber bursts in, grabs Castañeda off the bed and takes the money.

The outlaws force Joe Goldwater to open the safe. Expecting a large amount of cash for the mining payroll, they are crushed when they find only $600 in cash, a watch and a couple pieces of jewelry.

The bandits take the loot and leave. As they mount their horses, several locals—including Krigbaum, two others and a deputy sheriff—fire down the gulch at the fleeing men. They escape, unscathed.

The robbery is over, but the search for the five men who perpetrated what will become known as the “Bisbee Massacre” has just begun.

James Krigbaum mounts his horse to carry the word of the robbery to Tombstone, passing the stage carrying the payroll the robbers wanted. He makes the 22-mile trip in record time.

In Tombstone, roommates Milton Clapp and George Parsons (of Parsons’ diary fame) raise funds for the cause. On Toughnut Street, Parsons stops Ben Williams, superintendent of the Copper Queen Mining Company, and collects $1,000 in greenbacks. The reward money reaches $15,000.

In Bisbee, John Heath (sometimes spelled as Heith) is among the first to join the pursuit. His dance hall opened on the day of the robbery. When the posse he is riding with reaches Forrest Ranch (see map), Heath tries to convince his partners that the outlaws likely headed for the Dragoon Mountains or possibly Tombstone. Deputy Sheriff Bill Daniels and others are not convinced; they continue up the Sulphur Spring Valley, while Heath and another man strike out toward Tombstone.

Daniels’ posse strikes paydirt when the men come upon the carcasses of dead horses. Rancher Frank Buckles informs the lawmen that five of his horses have been stolen. While investigating his claim, the posse stops at the cabin of prospector Luben Pardu, who says five men stopped at his place, divided what appeared to be loot and separated. Pardu also tells the lawmen the same men had stopped at his cabin a week prior, along with a sixth man, who acted like he was the leader of the gang. He identifies them: Comer “Red” Sample, Bill Delaney, Dan Kelley, Dan Dowd and James “Tex” Howard, all of them known rustlers from the Clifton area. The sixth man he names is John Heath.

The surprised lawmen promptly arrest Heath at his dance hall and take him to the Tombstone jail.

With the culprits identified, the Copper Queen Mining Company prints and distributes handbills describing the men and the stolen jewelry. These are widely circulated all over the Southwest and northern Mexico.

Lawmen first arrest Kelley in Deming, New Mexico. Kelley was getting a shave, and his barber, who had seen the handbills, sent word to the authorities who arrested Kelley while he was still in the chair. He is sent by train to Tombstone, Arizona, and locked up in the county jail.

Howard and Sample get caught after they returned to their stomping grounds near Clifton. Sample confided to his girlfriend where he and Howard would be camping along the Gila River. Before he left, Sample gave her a gold watch and chain. His girlfriend, however, had taken up with another man, W.W. Bush; she showed the timepiece to him, and he recognized it from the handbills. Bush took the watch to the Clifton authorities. Deputy Sheriff John Hovey and his posse then promptly captured the two as they sat under a tree cleaning their guns. Sample still had on a coat with a bullet burn across the back, which marked him as one of the two shooters who stood outside the store.

Deputy Sheriff Daniels doggedly tracks outlaw Dowd to Chihuahua, Mexico, where the outlaw had gotten a job in a mine. When Daniels questioned the miners, he quickly identified Dowd and captured him. With the cooperation of the mining superintendant, Daniels hid his prisoner in a freight wagon going by night to Chihuahua City and then transferred him to a baggage car of a train heading for El Paso, Texas. Once across the border, Daniels had to wire Tombstone to get funds to make the last leg of the long journey. The Copper Queen mine wired $100, and Daniels triumphantly returned to Tombstone with his prisoner.

The authorities lose track of the most dangerous outlaw, and a dead shot, William Delaney. But old habits die hard,  and Delaney gets into a barroom brawl in Minas Prietas, Sonora. The Mexican police recognized his description from the Copper Queen handbills and, spurred on by the reward, they allow a Cochise County deputy, Cesario Lucero, to put Delaney on a boxcar and leave the country.

Without these handbills, the authorities most certainly would not have been so successful in capturing all five of the Bisbee robbers.

The five prisoners were tried in Tombstone on February 8, 1884. Despite pleas of “not guilty,” the evidence against the five was overwhelming. The people who were in the Goldwater-Castañeda store identified Dan Kelley, Dan Dowd and “Tex” Howard. “Red” Sample’s possession of William Clancy’s watch was undeniable evidence against him and Howard. Prospector Luben Pardu proved to be a convincing witness for the prosecution’s argument that all the men were guilty. On February 19, the court found the five guilty of first-degree murder and sentenced the men to hang on March 28.

John Heath was tried separately, convicted of second-degree murder and sentenced to prison. His lawyers wanted to appeal the verdict, which incensed many in Bisbee and Tombstone. On the morning of February 22, a vigilance committee overpowered the guards and took Heath from the jail. They then hanged their prisoner from a telegraph pole.

In his autopsy report, Dr. George Goodfellow stated that Heath “…came to his death from emphysema of the lungs, which might have been, and probably was, caused by strangulation, self-inflicted or otherwise….”

On February 28, authorities paid Sheriff Jerome Ward $1,000 in reward money ($500 for capturing Kelley and $500 for Delaney). Deputy A.G. Hill collected $1,000 for capturing Howard and Sample. Deputy Bill Daniels received $500 for capturing Dowd. As was typical on the frontier, a barber in Deming, an ex-girfriend in Clifton and Rurales in Sonora got stiffed.