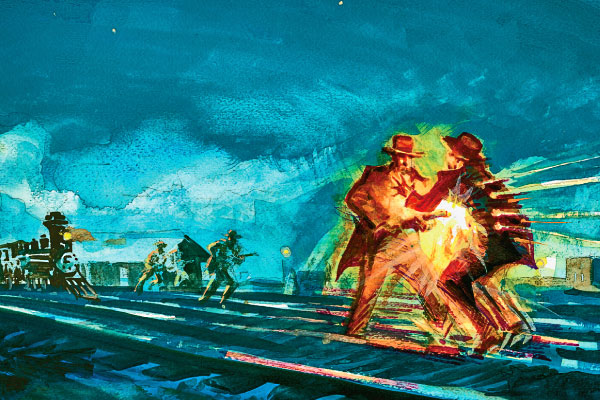 With Morgan’s body safely out of Arizona Territory, Wyatt, his younger brother Warren, Doc Holliday and two other handpicked men accompany another brother, Virgil, and his wife, Allie, to Tucson. Virgil is still weak from an assassination attempt in December.

Guarded by Wyatt and his men, Virgil and Allie travel by buckboard to Contention City, where they board the train. They then switch trains at Benson, and the party has a little over an hour ride to Tucson.

Dusk falls as the passenger train slows down for its approach. Tucson is lit up. The city’s modern gas lighting system has been turned on for the first time. Celebratory shots can be heard as the engine glides into the station.

Stepping off the train, Doc Holliday carries two shotguns, which he deposits in the depot office. The Earp party makes its way to the dining room in the Porter Hotel.

After finishing their meals, the Earp party walks back to the train and retrieves the shotguns from the depot office. Wyatt and his men say their goodbyes to Virgil and Allie. They then get their tickets for an eastbound train for the trip back to Benson.

While waiting for the train to move out, a passenger allegedly informs Wyatt that Frank and Clanton are lurking near the hotel and may plan on shooting Virgil through the train window as it goes by.

Bristling with shotguns and rifles, the Earp bodyguards, led by Wyatt, run down the train tracks, straight for Frank, who is standing near the southeast corner of the hotel.

Frank runs for his life. In the lead, Wyatt chases Frank for about 100 yards (saloonkeeper George Hand claimed it was a few hundred yards).

“I ran straight for Stilwell,” Wyatt later recounts. “It was he who killed my brother. What a coward he was. He couldn’t shoot when I came near him. He stood there helpless and trembling for his life. As I rushed upon him he put out his hands and clutched at my shotgun. I let go both barrels, and he tumbled down dead and mangled at my feet.”

Other shots are heard, but locals assume they are part of the gas light celebration.

As the train carrying Virgil chugs out of the station, Wyatt runs up to the cars, holding up one finger and mouthing the words, “One for Morgan.” Or so the legend goes. Virgil and Allie glide by in the darkness.

After the killing of Frank Stilwell, Wyatt Earp and his men searched for Ike Clanton for several hours before giving up and walking eastbound on the Southern Pacific train tracks to Papago Station, about 10 miles east of Tucson, Arizona. There, Wyatt flagged down an eastbound freight train. The crew hitched a ride to Benson, and from there, on to Tombstone.

Wyatt and his posse were now wanted fugitives. After a week of maneuvering and two alleged killings (Florentino Cruz and Curly Bill Brocius), Wyatt fled Arizona Territory as a wanted man.

In mid-April, the famous scout and Frank’s older brother, “Comanche Jack” Stilwell, arrived in Tombstone to investigate his brother’s death and settle his affairs. While there, he joined a 30-man posse, which included John Ringo, Ike Clanton and Pete Spence, that hunted the Earp party, unsuccessfully. Wyatt and his men had headed out for Silver City, New Mexico, where they sold their horses. After taking the stage to Deming, they boarded a train for Albuquerque and spent two weeks there, before going on to Colorado and evading the law. That is, until Doc Holliday got arrested in Denver in May and narrowly escaped extradition to Tombstone.