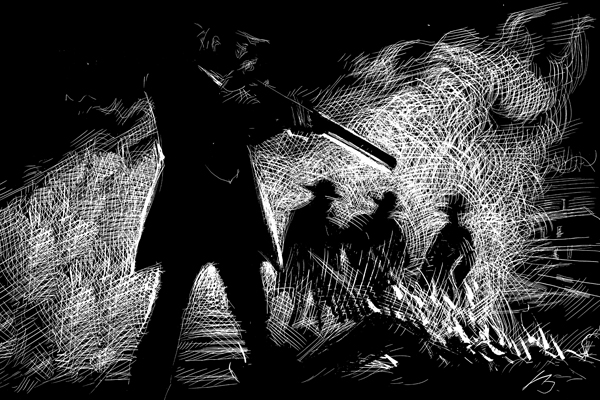 With the recent killing of Morgan Earp by assassins, Wyatt Earp spends his 34th birthday attending to the details of shipping his brother’s remains home to California.

With Morgan’s body safely out of the territory, Wyatt, his younger brother Warren, Doc Holliday and two other hand-picked men accompany Virgil Earp (who is still weak from an assassination attempt in December) and his wife Allie to Tucson.

Guarded by Wyatt and his men, Virgil and Allie are transported by buckboard to Contention City where they board the train.

Switching trains at Benson, the party has a little over an hour ride to Tucson, and it is dusk as the passenger train slows down for its approach. Tucson is lit up as the city’s modern gas lighting system has been turned on for the first time. Celebratory shots can be heard as the engine glides into the station.

Stepping off the train, Doc Holliday carries two shotguns, which he deposits in the depot office, as the Earp party makes its way to the dining room in the Porter Hotel.

After finishing their meals, the Earp party walks back to the train and retrieves the shotguns from the depot office. Wyatt and his men say their goodbyes to Virgil and Allie, and are ticketed on an eastbound train for the trip back to Benson.

While waiting for the train to move out, a passenger allegedly informs Wyatt that Stilwell and Clanton are lurking near the hotel and may plan on shooting Virgil through the train window as it goes by.

Bristling with shotguns and rifles, the Earp bodyguards, led by Wyatt, run down the train tracks, straight for Stilwell who is standing near the southeast corner of the hotel.

Stilwell runs for his life. In the lead, Wyatt chases Stilwell for about 100 yards (saloon keeper George Hand claimed it was 200 yards).

“I ran straight for Stilwell,” Wyatt later recounted. “It was he who killed my brother. What a coward he was. He couldn’t shoot when I came near him. He stood there helpless and trembling for his life. As I rushed upon him he put out his hands and clutched at my shotgun. I let go both barrels, and he tumbled down dead and mangled at my feet.”

Other shots are heard, but many of the locals assume it is more of the gas light celebration.

As the train carrying Virgil chugs out of the station, Wyatt runs up to the cars, holding up one finger and mouthing the words, “One for Morgan.” Virgil and Allie glide by in the darkness.

Were Ike Clanton and Frank Stilwell Gunning for the Earps?

Ike Clanton had been in Tucson for two weeks prior to the Stilwell shooting. Clanton and Frank Stilwell were witnesses in Jerry Barton’s trial before the District Court, and Clanton was allegedly at the train station to meet another witness named M’Dowell.

Clanton was seated under the veranda of the Porter Hotel adjacent to the train station (see map, below), waiting for the witness to detrain when Stilwell approached and asked him to “go down town, as the Tombstone crowd [meaning the Earps, who had just arrived on the same train] evidently intended to kill him,” according to the March 22 Arizona Daily Star. Clanton initially refused, but finally, he and Stilwell “walked away a few paces … conversing for fifteen minutes.” During this time, the Earp party went into the hotel to eat.

“Clanton then walked down towards the school house, and Stilwell walked back around the office corner of the hotel. At that moment all the Tombstone Parties [the Earps] went into one of the cars, and several of them returned at once, following along after Stilwell.” At this point, Stilwell evidently realized he was in deep trouble and began to run. “Soon several shots were fired in rapid succession, a loud scream following the first shot.”

“When Clanton heard the shooting,” the Daily Star continued, “he armed himself and returned towards the depot, and meeting some parties inquired the cause of the shooting, and was told they did not know, or that they were celebrating the illumination of the city by gas. He then retired.”

There is some debate as to whether Clanton and Stilwell were actually gunning for the Earps at the train station, but one thing is for sure: if they weren’t looking for a fight, they picked a pretty dumb spot to lollygag.

Deputy U.S. Marshal J.W. Evans testified he saw Doc Holliday step off the train with two shotguns, which he checked at the railroad office. After the Earp party ate dinner in the Porter Hotel, Holliday instructed a shorter man (believed to be Sherman McMasters) to reclaim the weapons just prior to the shooting, Evans said.

The fireman on the departing train testified he noticed a man running along the tracks, followed by four men. Since firemen sit on the left side of the engine (it’s their responsibility to keep fuel in the boiler), this report seems to corroborate that Stilwell was near the Porter Hotel when he was spotted by the Earps and that they ran on the left side of the train, between the train and the depot. The fireman heard “five or six shots fired in rapid succession.”

W.J. Dougherty, a resident of Tucson who lived near the tracks, testified: “I heard one shot and saw a flash, then in about half a minute heard another followed in quick succession by two more.” This seems to match Wyatt’s version that he stuck his shotgun just under Stilwell’s heart and pulled both triggers. Then the others came up and probably added their chorus of lead, which would explain Tucsonian George Hand’s journal entry the next day:

“Frank Stilwell was shot all over, the worst shot-up man that I ever saw. He was found a few hundred yards from the hotel on the railroad tracks.”

Because of the Stilwell shooting, Wyatt and his men missed the return train to Benson. Wyatt Earp, Doc Holliday, Sherman McMasters, Turkey Creek Jack Johnson and Warren Earp footed it nine miles eastward along the railroad tracks to Papago station, and at midnight flagged an eastbound freight train. They took the train to Contention City and either reclaimed their horses or took the next stage into Tombstone.

With Sheriff Bob Paul carrying warrants for Wyatt’s arrest, Wyatt was now a fugitive from the law. He quickly settled his financial affairs in Tombstone and began his so-called Vendetta Ride, wherein he and his men killed Florentino Cruz and allegedly shot and killed Curly Bill Brocius before fleeing to New Mexico and on to Colorado.