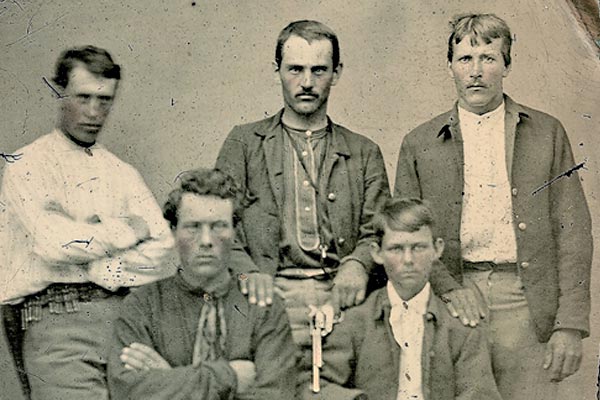 They are 5th Cavalrymen, most of them recently from the legendary “Horsemeat March” and the combat at Slim Buttes, en route through the Dakota Territory’s Black Hills to Nebraska’s Camp Robinson.

The tintype, here reversed to present the group as posed, shows Pvts. Lewis Boone, John Jones and Richard Davis (standing from left), and Frederick Sutcliffe and August Schneider (sitting). All were members of the 5th Cavalry under Col. Wesley Merritt. All had seen action at Warbonnet Creek in Nebraska on July 17, and marched north to reinforce Crook, following the Battle of Rosebud Creek in Montana. All but Davis had participated in the contest at Slim Buttes, the first clear U.S. Army victory of the Great Sioux War, occurring 11 weeks after Custer’s defeat at Little Big Horn.

The men appear fresh from the field, yet cleanly shaved, attired in the clothing they have been wearing for months while tracking the Sioux to Slim Buttes. Wearing a mix of civilian and issue shirts, blouses, cavalry trousers and boots, some sport holsters with revolvers and full cartridge belts, while one displays his .45 Colt pistol.

Typifying soldiers of the period, they each came from diverse backgrounds. Boone, from rural Missouri, was a 19-year-old carpenter when he signed up in 1871. He served in Arizona, Kansas and Texas before his service against the Sioux. Boone left the Army in late 1876, moved to Illinois and lived until 1945.

Jones, who enlisted in Milwaukee, Wisconsin, in 1871, served in Arizona and Kansas prior to his Sioux War service. Discharged in October 1876, Jones died in Minneapolis in 1901.

Davis of Virginia enlisted in 1872 and left the Army in 1877, while Schneider, from Germany, joined in New York City in 1872, served in Arizona and Kansas, and took release in 1877.

Perhaps most interesting of the quintet was Sutcliffe, from Missouri, a trumpeter whose instrument can be discerned to the right of his feet. Sutcliffe joined the Army in 1876 at age 16 (exempted from the legal age of 21). His Army career with the 5th Cavalry spanned 26 years. He notably served in the disastrous battle of Milk River, Colorado, wherein Maj. Thomas T. Thornburgh was killed in September 1879, precipitating a six-day siege by Utes that saw heavy troop casualties. Sutcliffe took a bullet in his leg and won a citation for “conspicuous gallantry.” He subsequently served six enlistments, was promoted chief trumpeter of the regiment and saw duty in the Philippines before retiring in 1902. He died in St. Paul, Minnesota, in 1916.

The occasion for the photograph was likely a celebration of Jones getting discharged on October 14. Whatever the reason, within months, all but Sutcliffe had left the Army and gone in separate directions, leaving this solitary image as testament of their camaraderie during a turbulent period of Western history.

A retired National Park Service historian and a Black Hills State University alumnus, Jerome A. Greene is the author of numerous books. His forthcoming book, due out next March, is American Carnage: Wounded Knee 1890.