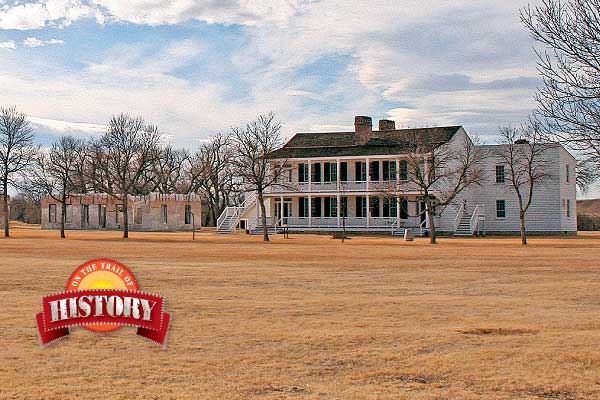 Fort Laramie is one of the great frontier posts in the West, now restored as a national historic site with a complete complement of structures: Army barracks, enlisted men’s and officers’ quarters situated around the parade ground, Old Bedlam (Wyoming’s oldest standing building) and the sutler’s store.

This post, located near the confluence of the North Platte and Laramie Rivers, served the fur trade, overland trail travelers and the Army before it became a starting point for travelers headed toward the goldfields in Alder Gulch, Montana Territory.

John Bozeman and John Jacobs negotiated the route that took Bozeman’s name by traveling east and south from Virginia City in 1863. They knew gold seekers would want to reach the new gold diggings in Alder Gulch as quickly as possible, and they rightly thought that a trail cutting across the Powder River Basin, through Lakota, Cheyenne and Crow lands, and then heading west, would be the most direct and fastest way to get from the main overland trails to the newly established gold camp.

When Bozeman and Jacobs organized the first wagon train and set out across the trail in early 1864, they split from the Oregon Trail at Deer Creek Station (near present-day Glenrock, Wyoming). A week into the trip—barely 140 miles from the North Platte River—a war party of Lakota and Cheyenne Indians attacked and drove them back to the main overland road closer to the North Platte. This altercation with the tribes was just the beginning of conflict on what became known as the Bloody Bozeman. From 1864 until 1868 around 1,500 travelers took the route across the Powder River Basin along the east flank of the Bighorn Mountains, over what would become the Crow Indian Reservation, along the Yellowstone River, over Bozeman Pass, and down into Alder Gulch, the site of the gold camp at Virginia City, Montana.

Fort Laramie, in eastern Wyoming, is a good starting point for this trip as both trail travelers and later the frontier army troops who were stationed at forts established along the Bozeman Trail used this fort as an outfitting post. Interpreters bring the post to life at times during the year with soldier and wagon train re-enactments. This site was pivotal in tribal relations with the first treaty conference held in 1851 at nearby Horse Creek involving representatives of most of the Northern Plains tribes. That treaty established the territories north of the North Platte River, and it gave the tribes an understanding that if they allowed the main east-west overland road (to Oregon, California and Utah on the Mormon Trail) across their homelands, then they could expect to be left alone in other regions. But as noted, the route Bozeman and Jacobs pioneered cut through the Powder River Basin of northeastern Wyoming, and this was through the heart of the tribal lands.

The breach of promise—and an outright attack on a peaceful Arapaho village of Old David and Black Bear by Maj. Gen. Patrick Connor on August 28, 1865, that resulted in the destruction of 250 lodges and the deaths of many Arapahos including women and children—did not sit well with the tribes, who aggressively fought to halt the trail traffic and, more important, to force the army, which established three military posts in the area beginning in 1866—Fort Reno, Fort Phil Kearny and Fort C.F. Smith—to withdraw from the area. Wagon trains were under constant threat, and there were Indian-on-gold seeker attacks from the opening of the trail in 1863 until it closed in 1868. The Indians also harassed and fought with the army in signature battles such as the Fetterman Massacre (December 21, 1866), the Hayfield Fight (August 1, 1867) and the Wagon Box Fight (August 2, 1867).

While Fort Laramie served as a frontier trade site and military post, the town of the same name was not in existence during the period of the Bozeman Trail travel. Virginia City, however, was very much a city. Following the discovery of gold in Alder Gulch by Bill Fairweather, Henry Edger and four companions in May 1863, the diggings quickly attracted thousands of miners and businessmen. This city grew quickly and became the first territorial capital of Montana, and was the location of Montana’s first published newspaper, The Montana Post. It had Montana’s first school and first Masonic Hall, and the Montana Historical Society formed in Virginia City. Now it is a State Historical Site, with many of the 19th-century buildings owned by the Montana Historical Society. They are carefully preserved and take visitors back into the architecture and daily life of
the 1860s.

Between those two end points for the Bozeman Trail are some 680 miles of the route across eastern Wyoming and southern Montana. Even if you only travel this trail on major highways (U.S. 26/I-25 from Fort Laramie to Casper and Buffalo, Wyoming; I-90 from Buffalo through Billings and Bozeman, Montana, and U.S. 191, Route 84, and U.S. 287 to Ennis, then Route 287 to Virginia City), you will cross through country with big views as you leave the valley of the North Platte River, drive through the grasslands and foothills of the Bighorn Mountains, and then traverse the Yellowstone River Valley before crossing Bozeman Pass and then turning southwest to one of the earliest towns established in Montana Territory.

In use only for a few short years, from its beginning in 1863-64 to the destruction of the military forts by the American Indians in 1868, the Bozeman Trail did allow gold seekers an opportunity to travel a short—albeit hazardous—route from the North Platte to Alder Gulch.