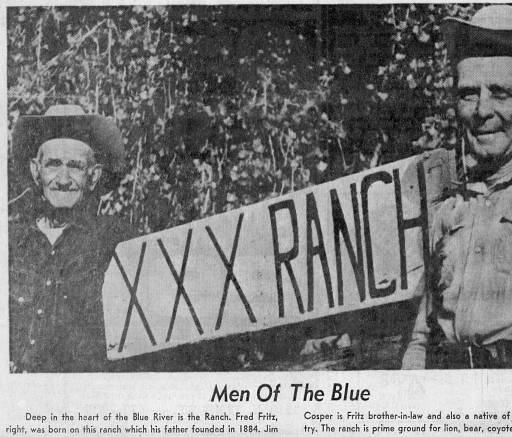 The rangeland of Arizona had pretty strict ideas when it came to stealing livestock yet it can’t be denied that a lot of cow outfits got their start with a running iron and a long rope. Old timers like to tell of a young cowboy who settled on the fringe of a big outfit determined to start a little ranch of his own. He arrived with nothing but a branding iron and a steer and in just one season he’d accumulated a fine herd of cattle. That must have been some steer.

Ranchers didn’t like to openly accuse someone of rustling cattle; they’d just say subtle things like, “his cows have calves every wash day,” or “his cows seem to have triplets every time.”

One rancher suspected of stealing his neighbor’s cows was finally given an ultimatum: If his cows continued to have more than one calf at a time they were going to give him a suspended sentence—-from the limb of a cotton wood tree.

Cattle rustling was sometimes tolerated among neighbors for the sake of not starting a range war. A story is told about a rancher who invited his neighbor of 25 years over for a barbecue to celebrate their long friendship. Everyone in the county was invited to the feast. Just before dinner was served he told his friend, “Tonight, I’m gonna feed you something you’ve never eaten before……..your own beef.”

The practice of branding livestock goes back to antiquity and nothing yet has been invented to take its place as a permanent mark of ownership.

In the Old West, cowboys who could neither read nor write, quickly learned to name any brand. One old rancher said, “A good cowboy could understand the Constitution of the United States were it written with a branding iron on the side of a cow.”

One of Arizona’s most enduring brands had its beginnings in 1882, when Fred Fritz settled in the Blue River country in Greenlee County and started raising cattle. He was from a German settlement in south Texas and could neither read nor write English. One day a brand inspector rode in and informed the cattleman that bureaucracy had arrived and he must now register his brand.

After filling out the necessary papers the inspector handed Fritz a document to sign.

He scrawled an “X” in the proper place, then called over a couple of cowpunchers as witnesses. Neither could write their names either so each placed an “X” beside the boss’.

“Now,” said the official, “You must draw your brand in the box at the bottom of the page.”

The old cattleman stared at the three signatures, then with slow deliberation, he made three “X” marks in the box. The Three X brand was born. You can still see that brand stamped on the hides of cows in Greenlee County today.