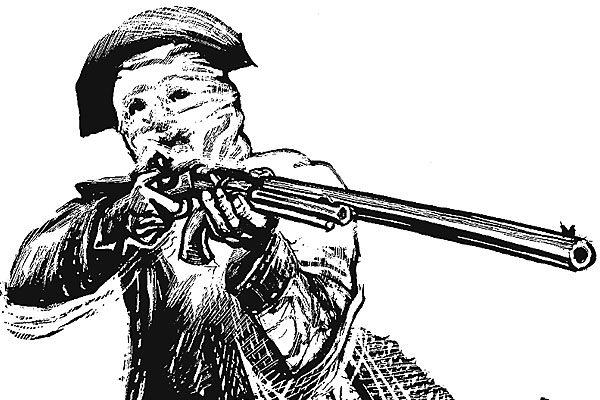 A lone highwayman, masked in muslin, robs a stage en route from Tucson to Florence, Arizona, carrying three passengers, including  Arizona Citizen editor John Clum. He robs the stage of about $60 when it reaches Point of Mountain (near present-day Rillito) The victims report the robber gripped his weapons in a peculiar manner; he held his pistol against the barrel of his rifle, almost as if he were hedging his bets should anyone creep up on him.

The next week, on August 8, the Tucson to Florence stage approaches the spot where the robbery took place. A curious passenger asks the driver to point it out. As he does, out steps the same masked man. “I am here again!,” he shouts, “Throw out the strongbox and give up your money.” This time, the brazen highwayman escapes with about $500.

Arriving on the scene, a sheriff’s posse trails the robber but fails to find him. Seasoned tracker Juan Elias is brought in on the investigation, and he discovers a clever ruse.

Two sets of horse tracks are found leaving Tucson and heading to the scene of the crime, but none of them returned. Trailing the northbound tracks south, Elias discovers a thrown horseshoe. Beyond that point, the tracks give the odd impression of a horse with three hooves going in one direction and the fourth unshod hoof going in the opposite direction. Elias correctly ascertains that the robber reversed the horse shoes at the robbery site and rode back to Tucson, leaving behind a trail that made it seem as if all tracks headed away from the Old Pueblo.

The police arrest Nemitz, and the court sets bail at $2,000.

Caving under interrogation, Nemitz betrays the robber he names as being William Whitney Brazelton, who worked for a time at James Carroll’s corral.

On August 19, Pima County Sheriff Charles A. Shibell and a posse of six deputies set up a trap. Brazen Bill has agreed to meet Nemitz for needed supplies.

In a thicket near the river, Brazen Bill approaches a log and coughs. Hidden in the heavy brush, a posse member returns the signal, a reply cough. Brazen Bill responds by placing his hat on the log, a signal that Nemitz is free to come out in the open. Suddenly, the silence is broken by a shotgun blast. A fusillade of pistol shots follow.

The newspapers (John Clum’s in particular) reported that Brazelton had robbed nine coaches in Arizona and New Mexico—all of them single-handedly. Clum also wrote that Brazen Bill was  “dextrous with firearms and had not [a] streak of yellow in him.”

Little is known of Brazelton’s early years. He told a friend in Tucson that he had robbed two stagecoaches in northern Arizona, three near Silver City, New Mexico, and four near Tucson. One of the newspapers described Brazelton as a “great, big, good natured fellow; and except when on business, as harmless as any man could be.”

For many years after Brazen Bill’s death, the native population around Tucson avoided the spot where he had met his end, especially when traveling at night, even if they had to make a journey of a mile to go around it. The old-timers often told tales of seeing a phantom highwayman standing in the road (see below).