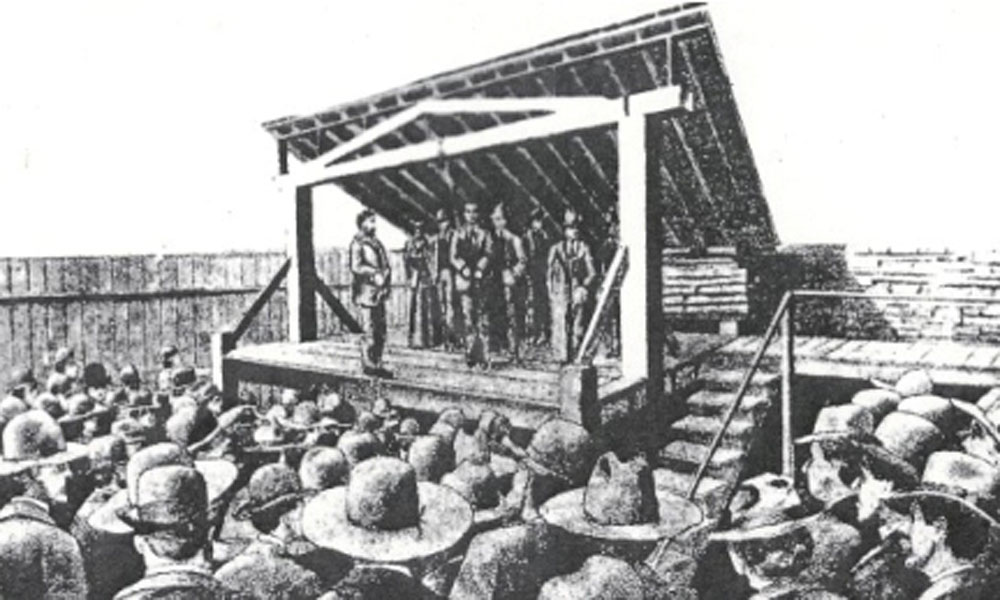 Crawford Goldsby, aka “Cherokee Bill”, was born February 8th, 1876 at Fort Concho, Texas. He was the son of George Goldsby, a sergeant in the 10th Cavalry, the storied Buffalo Soldiers. His mother, Ellen, was a Cherokee with White and African-American blood. His parents split when he was seven and she took him to Ft. Gibson, Indian Territory. It’s said he killed his first man when he was twelve and soon he was running with a rough crowd. At the youthful age of eighteen he hooked up with outlaws Jim and Bill Cook. In June, 1894, the three were confronted near Tahlequah, Oklahoma by lawmen carrying a warrant for Jim Cook’s arrest. A gunfight ensued and Goldsby, now calling himself Cherokee Bill, shot and killed lawman, Sequoyah Houston. Jim Cook was badly wounded and was captured by lawmen at Ft. Gibson.

Bill Cook and Cherokee Bill recruited a gang of like-minded youngsters, black men with Indian blood. They began small, peddling whiskey and stealing horses then moved on to robbery, going on a wild rampage of terror including robbery and murder.

Their furious reign of terror only lasted a few months, they pulled their first job on May 26th at Wetumka, Oklahoma where their take was only thirty-five cents and twelve robberies later on December 31st, 1894 at Nowata, Oklahoma Cherokee Bill had his swan song.

He now had a $1,500 reward on his head and a month later with the help of some of Bill’s acquaintances, he was captured and taken to Fort Smith, Arkansas to stand trial in Judge Isaac Parker’s court.

On April 13th, 1895 Cherokee Bill was sentenced to hang. Judge Parker characterized him as “a bloodthirsty mad dog who killed for the love of killing.”

On March 17th, 1896 the sentence was carried out on Cherokee Bill, who was game to the end.  It was reported that when asked if he had any last words, he muttered, “I didn’t come to talk, I came to hang.”   He died swinging from end of a rope at the tender age of twenty.