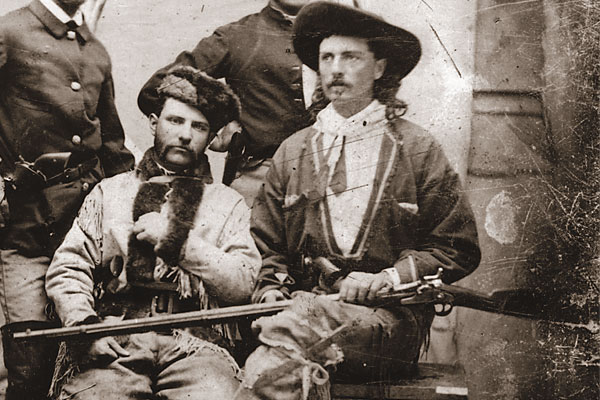 William Frederick “Buffalo Bill” Cody had a number of guns and horses throughout his colorful career. However, he always held one rifle and horse in especially high esteem.

During Cody’s early scouting days, he often carried a Springfield, 2nd Model .50-70 Allin conversion single-shot rifle, better known on the frontier as a “needle gun” because of its long firing pin. Cody named his rifle Lucretia Borgia because, like the infamous noblewoman of Renaissance Italy, she was “beautiful, but deadly.”

Cody used Lucretia Borgia with such effectiveness during his legendary contest with fellow hunter Billy Comstock, held sometime around 1868. The two frontiersmen competed in a mounted shooting contest for $500 and the title of Champion Buffalo Hunter. Comstock re-lied on a less powerful, but faster shooting, Henry .44 rimfire repeater, while Cody stuck to his trusted .50-70. At the end of the day-long match, Cody had killed 69 buffalo to Comstock’s 46.

Buffalo Bill’s most celebrated horse during his early frontier period, and the one he rode in the competition with Billy Comstock, was Brigham. Although few details of this horse are known, beyond the fact that he was small, dark-colored and an unattractive animal, he was as fast and trustworthy as any mount in the West of the time. Cody referred to Brigham as the “fleetest steed I ever owned.”  Brigham was purchased from a Ute Indian in Utah, then under the control of Mormon leader Brigham Young.

Cody often rode Brigham without saddle or bridle. During the late 1860s, Cody spotted a small herd of buffalo near Fort Hays, Kansas. Cody grabbed his rifle, mounted Brigham bareback and joined a group of army officers who had also ridden out to the open prairie to chase these animals. During the ensuing run, where Buffalo Bill and his fleet pony took the lead, Cody approached within 100 yards of the rear of the small herd. “I pulled the blind-bridle from my horse, who knew as well as I did that we were out for buffalo—as he was a trained hunter,” Cody states. “The moment the bridle was off, he started at the top of his speed, running in ahead of the officers, and within a few jumps he brought me alongside the rear buffalo. Raising ‘Lucretia Borgia’ to my shoulder I fired, and killed the animal at the first shot. My horse then carried me alongside the next one, not ten feet away, and I dropped him at the next fire. As soon as one buffalo would fall, Brigham would take me so close to the next, that I could almost touch it with my gun.”

At the conclusion of that run, eyewitness accounts reported that Cody had killed 11 buffalo with 12 shots. It’s no wonder that Cody revered his saddle pards so much.