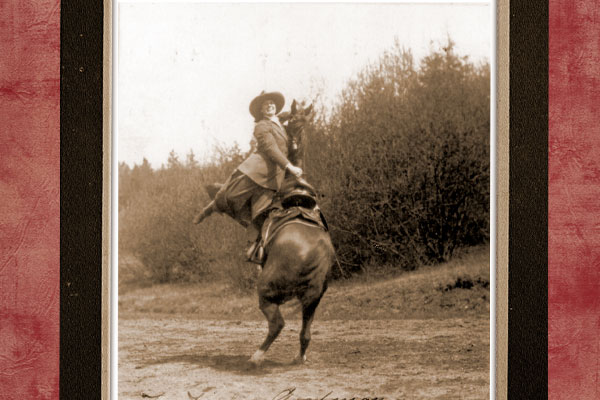 When Buffalo Bill’s Wild West offered its performance spectacle between 1883 and 1916 before audiences across the United States and Europe,  the appearance of his “Buffalo Gals” performing dangerous feats of trick riding drew audience attention and apprehension.

They made up the “American Amazon Act” with the promoter’s promise they would “thrill and entertain.” Buffalo Bill Cody referred to the performers as a “mixture of feminine delicacy and masculine will.” Their courageous skills captured the hearts of their audiences and forever changed the way that frontier women were perceived.

One of his remarkable talents was the young daredevil Adele Von Ohl Parker.  Arriving in town for a performance, she and the other women appeared in a grand Wild West parade featuring 181 horses, 18 buffalo, elk, donkeys, the Deadwood stagecoach, mounted cowboys and authentic Indian warriors.

A prominent New Jersey family, Adele’s family had been in the horse business since supplying horses to George Washington’s army during the Revolutionary War.  Like generations before her, Adele’s mother placed Adele on a horse when she was barely able to walk. Adele quickly excelled at riding, growing into a fearless horsewoman and trick rider with aspirations to become an actress. She left home in 1902 to pursue acting. When Buffalo Bill’s Wild West came through New York, Adele combined her two loves and joined Wild West in 1908, quickly becoming a star.  In 1909, Adele married fellow star performer Jim Parker, joining a new show known as “Cheyenne Days,” touring the globe for five years.

When ticket sales for Cheyenne Days began to sag, Adele and her husband said goodbye to life on the road. They moved to Los Angeles and rode into the fictional stories of early Hollywood movies in 1915.  She watched as life imitated art, imitating life.  Appearing on film as a stunt rider with Western dress and tack, she portrayed characters of the Old West.

By 1929, America’s Great Depression stranded Adele in Cleveland, Ohio, with little money as she attempted to launch her own show.  Instead, she started a riding school in North Olmstead, known as Parker Ranch.

Adele spent the next 37 years teaching young people “as much about life as she did about riding,” reminisced one student.  On this ranch, she staged her own “wild West” shows, and as life continued to imitate art, she hosted visits from cowboy celebrities like Gene Autry and Roy Rogers.

Another student wrote that Adele “opened a world to us, of flying mounts and dismounts, on horses that were often castoffs who became our beloved teacher.  We were horse-crazy kids who found a gold mine of love and horsemanship embodied in a woman who will never be forgotten.”