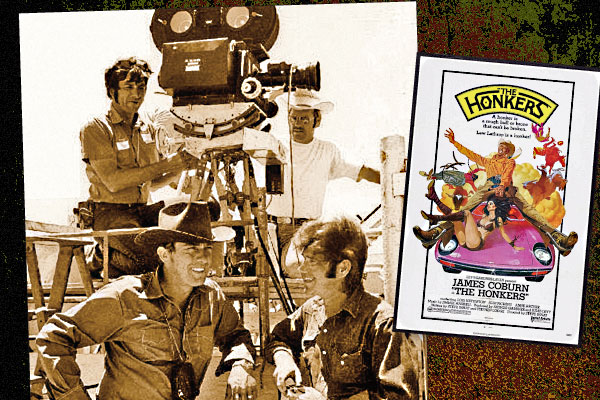 When actor and director Steve Ihnat approached Stephen Lodge to work with him on a screenplay that eventually became The Honkers, Lodge had no idea he was in a race against Cliff Robertson and Sam Peckinpah.

“Steve’s agent heard that rodeo movies were going to be the next big thing, and that’s why he wanted Steve to write one. We didn’t know that there would be two others around town and made at the same time, J.W. Coop and Junior Bonner,” Lodge says.

Born for Western movies, Lodge was more than equipped for the task of writing The Honkers, which would be his first produced film as a screenwriter. An insatiable cowboy fan as a boy, whose aunt and uncle worked for Monogram Pictures, Lodge had frequently found himself on dusty backlot streets watching Johnny Mack Brown, Andy Devine and Roy Rogers go through their paces. Lodge later found his own place in the industry as a top costumer for TV series that included 1967’s Dundee and the Culhane and 1968-70’s Here Come the Brides.

While working in wardrobe, Lodge met Ihnat. “Steve did some shows I worked on, The Fugitive and Here Come the Brides, and we would talk about a little film he’d just finished directing [Do Not Throw Cushions Into the Ring]. I told him about a script I’d written with Dave Cass Sr. that I was happy with, and he wanted to read it. I had no idea what he had in mind, but he took it home, came back and asked if I’d like to work on a rodeo script with him,” Lodge says.

The surprise for Lodge was that Ihnat had even less rodeo experience than he did. “It took us four weeks to write the first draft, and then we went to see a rodeo. Steve had never seen one as far as I know,” Lodge says, “so that’s how we picked up all the color and details.”

Their script attracted the attention of Martin Ransohoff, famous for  producing The Cincinnati Kid, but they couldn’t strike a deal. Within days, their project was picked up by TV moguls Arthur Gardner, Jules Levy and Arnold Laven, who were making films for United Artists. “This all happened very quickly, which is highly unusual, as you know,” Lodge admits. “I’d seen The Rifleman and had worked on the same lot as The Big Valley, but hadn’t had any contact with them before, but it’s how I met Jules and Arthur.”

The next step was securing leading man James Coburn. Coburn gives one of his most unaffected performances in the film, but Lodge wasn’t even consulted on the casting of his script. “The casting was Jules and Art and Steve, but I ended up doing wardrobe, which actually kept me on the set the entire show, more than just as the writer. So I got to see how everything was going,” he says. “But they cut the ending. We had a wonderful ending, originally, with Jim riding the yellow bull. This was after the bull had killed Slim’s character, and Jim goes and rides the bull late at night in the empty arena, until they’re both worn out. He faced it down. It was kind of our Moby-Dick, to have that passion of Jim’s character to beat that bull.”

Even so, The Honkers retains a genuine feel of the sport, as well as great affection for its characters, thanks to the writing and the wonderful cast. “I’d never met Slim Pickens before, but you meet him, and it’s like you had known him forever,” Lodge also has high praise for leading lady Lois Nettleton: “Isn’t she great? She’s so natural, and just the sweetest thing.”

One actor Lodge found himself at odds with was Coburn. “I thought Jim was a bit arrogant, but I loved him on screen,” Lodge says. “When we were fitting him for his jeans, he looked in the mirror and thought he looked terrible. Well, he had them up almost to his belly button. Slim was in the trailer too, and he said, ‘Let me show ya,’ and pulled the jeans down around Coburn’s hips, the way the rodeo cowboys wore ’em. He loved that. He was happy as could be, because now he looked the part. Thank God for Slim.”

The New Mexico filming lasted six weeks, with a great deal of work going into the naturalistic rodeo sequences. “We had to shoot the rides from two angles, facing the crowd and facing the chutes. Part of the ride was done one day, and the next part, another, and it all cut together just great. We had some great rides from the cowboys,” Lodge says.

The cowboys brought more to The Honkers than their time in the saddle. “We had a bunch of old rodeo cowboys who I knew from other shows. Between them, the wranglers and the extras, we picked their brains to find out how they felt about things,” Lodge says. “We also got a lot from Slim, from his rodeo days.

“Even though Steve and I wrote the thing together, we had totally different ideas about how it was going to look. But we’d get together after a day’s work, have a drink and talk over the shooting.”

Behind the camera was James Crabe, pre-Rocky, and the editor was Tom Rolf, who later cut Taxi Driver and won an Oscar for The Right Stuff. “I liked James Crabe, and I worked with his operator on my own short film afterwards,” Lodge says. “I thought Tom Rolf was great.”

The Honkers was released in 1972, as were J.W. Coop, Junior Bonner and When the Legends Die. These rodeo films effectively canceled each other out at the box office. They all had remarkable quality and heart, but nobody truly won the “rodeo race.”

At its center, The Honkers is the most naturalistic in its unblinking portrait of a rough-hewn cowboy and the deep love he gets from his friends and family, even if he can’t return it. Coburn is no softie; he is what he is, making few apologies.

But Lodge’s Ahab-like finale, with Coburn finally riding the yellow bull—his honker, a rank and hard animal to ride—would have given The Honkers a note of victorious drama, rather than leaving it open-ended. Good or bad, life keeps rolling along, and that, ultimately, could have been the sharpest point of The Honkers.

Lodge has gone on to write fine novels, such as Charley Sunday’s Texas Outfit, and other movies, including the cult classic Kingdom of the Spiders, yet he looks back on his first produced script with deserved pride: “I’d do it over again if I could.”