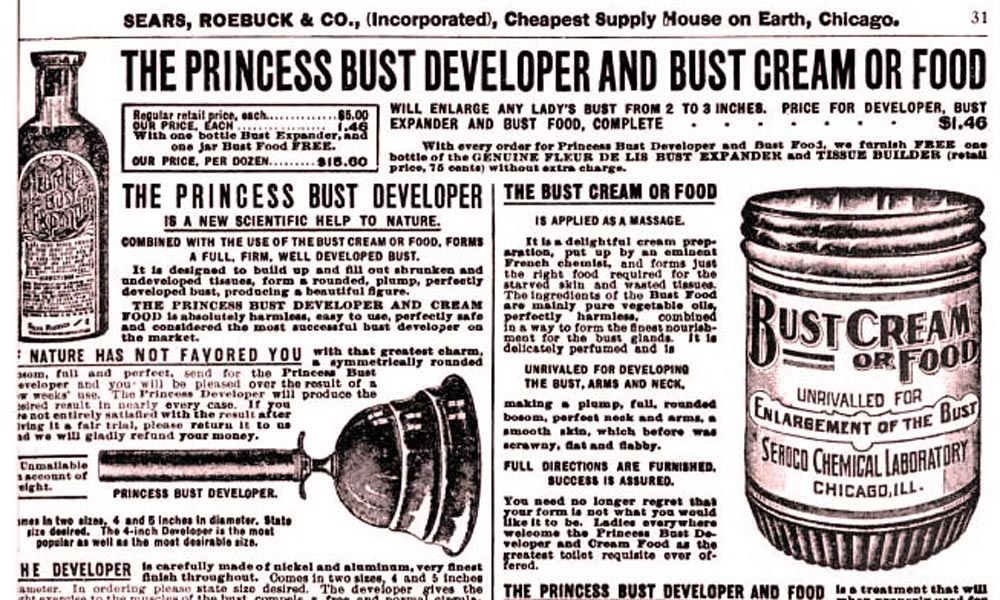 We think of the late 1800s as a time of Victorian refinement, with sensitivities so severe, one was to use the term “limb,” rather than the vulgar “leg.”

So it’s surprising that “Bust Cream or Food” and “The Princess Bust Developer” were popular. Say what?

Oh yes, and the products were advertised with this guarantee:”Will enlarge any lady’s bust from 2 to 3 inches.”

Here was the oh-so proper pitch: “If nature has not favored you with that greatest charm, a symmetrically rounded torso, full and perfect, send for the Princess Bust Developer and you will be pleased over the result of a few week’s use.” The accompanying picture looks suspiciously like a toilet plunger.

The Bust Cream or Food was touted as “unrivaled for enlargement of the breast” and was produced by the Seroco Chemical Laboratory in Chicago, Illinois.

“It is a delightful cream preparation, put up by an eminent French chemist and forms just the right food required for the starved skin and wasted tissues. The ingredients are mainly pure vegetable oils, perfectly harmless, combined in a way to form the finest nourishment for the bust glads. It is delicately performed and is applied as a massage.”

Both items were offered as a package deal for $1.46. Would love to know how many were sold.