A four-man posse from Uyuni, Bolivia, rides into the small village of San Vicente, warning  a village official, Cleto Bellot, and other locals, to be on the lookout for two Yankees with a mule belonging to the Aramayo Mining Company, whose payroll was recently robbed.

Bellot informs Inspector Rios that he has just come from putting two Americanos up for the night at a nearby home owned by Bonifacio Casasola and that the two men had requested sardines and beer and asked about the road to Santa Catalina, an Argentine town just south of the border. Rios tells the soldiers to load their rifles and, accompanied by Bellot, the three posse members walk to Casasola’s home and enter a small patio. As the  lawmen approach the Americans’ room, one of the Yankees appears in the doorway, draws his pistol and fires, hitting the lead soldier, Victor Torres, in the neck. Torres gets off a shot with his rifle, then runs out the patio door and collapses at a nearby house. He dies within minutes.

The other soldiers and Inspector Rios return fire, before they retreat out the gate with Bellot. The two  soldiers retrieve more ammunition and return  to the patio and continue firing into the house through the patio door. As darkness creeps across the scene, Captain Concha commands Bellot to find some locals who can watch the roof and the back of the house so the bandits escape. As Bellot rushes to find help, he hears “three screams of desperation” coming from the bandits’ room.

The firing stops and all is deathly quiet. Minutes turn into hours. The night is bitterly cold but the guards remain at their stations throughout the cold and windy night.

At dawn, Bellot and other members of the posse enter the room and see two lifeless forms, one of them stretched out on the floor, a bullet wound in the temple and another in the arm. The other corpse sits on a bench behind the door, hugging a large ceramic jar. He has been shot once in the forehead and several times in the arm. According to a report, the bullet removed from the second Yankee’s forehead came from the Colt of the other outlaw. From the positions of the bodies and the locations of the fatal wounds, the witnesses conclude that the first Yankee put his partner out of his misery, then turned his gun on himself.

A Description of the Robbers 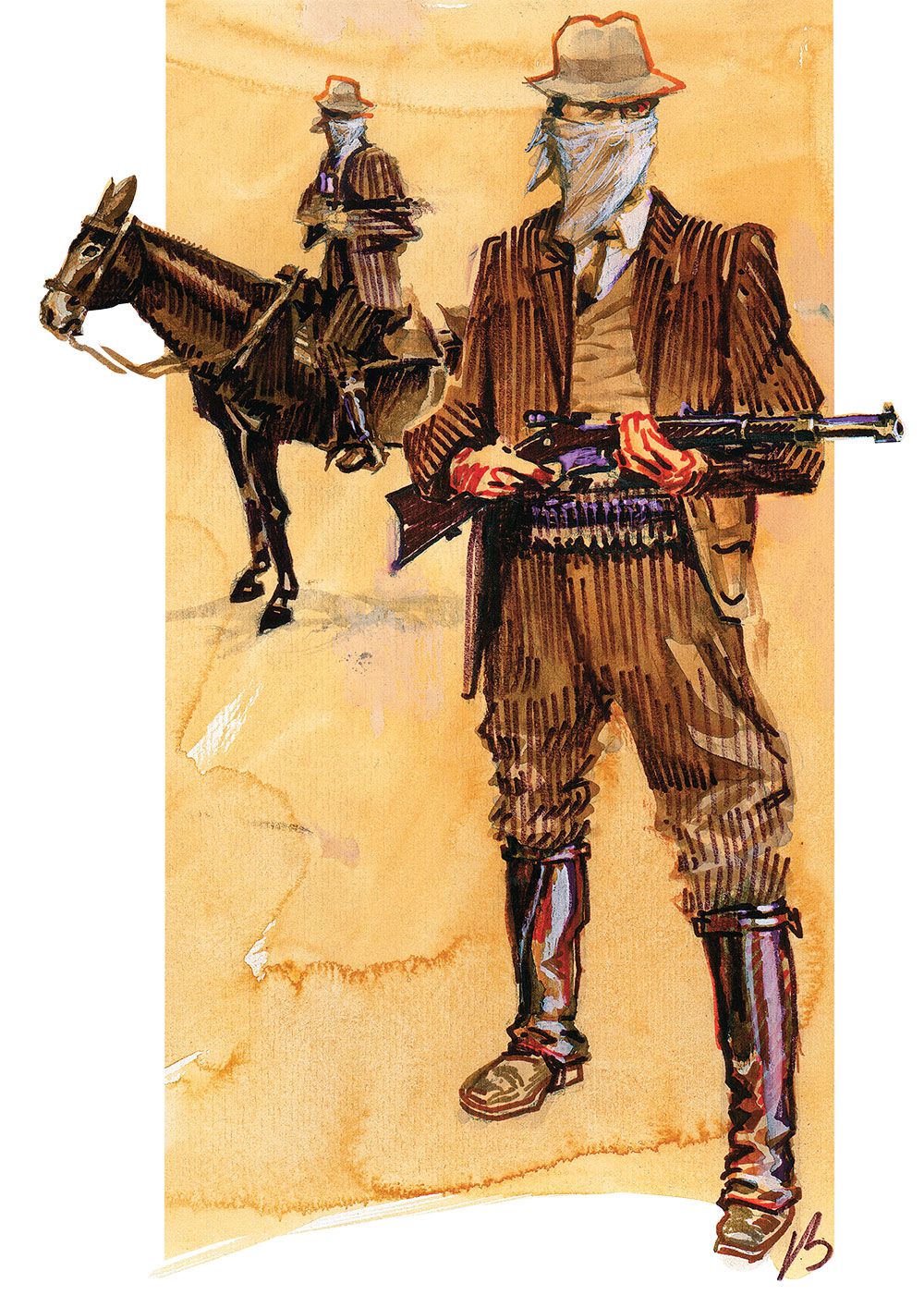 Carlos Pero, the payroll manager at the Aramayo Francke & Company, describes the two bandits who robbed the payroll near Dead Cow Hill: “The two Yankees wore new, dark-red thin-wale corduroy suits with narrow, soft-brimmed hats, the brims turned down in such a way that with the bandannas tied behind their ears, only their eyes could be seen…both of them carried new carbines, which appeared to be of the Mauser-type…but they were completely new…The bandits also carried Colt revolvers, and I believe they also had very small Browning revolvers outside their cartridge belts, which were filled with rifle ammunition.”

Both Butch and Sundance wore gaiters instead of boots. Here is an ad for polains (inset, left), the Spanish word for the popular leggings.

Once the outlaws’ possessions had been inventoried, Capt. Justo P. Concha absconded to Uyuni with the lot, leaving the Aramayo Company to battle for months in court to recover its money and mule.

Tupiza officials conducted an inquest of the robbery and shoot-out, but were unable to ascertain the dead outlaws’ names.

Boyd had been the Sundance Kid’s alias in Chile; Brown and Maxwell were aliases that he and Butch Cassidy had used in northern Bolivia. To settle Boyd’s estate in Chile, the legation sent a request for the death certificates to the Bolivian foreign ministry, stating that the Americans had “held up several of the Bolivian Railway Company’s pay trains, as also the stage coaches of several mines, and…were killed in a fight with soldiers that were detached to capture them as outlaws.”

Numerous stories circulated about Butch cheating death in Bolivia and returning to the States. (Sometimes Sundance is included, but most legends name only Butch.) The most persistent tale is one put forth by Lula Parker Betenson, one of Butch’s sisters, who insisted that Butch had visited the family in 1925. Others in the family disagree, saying that Butch never returned, but Lula still has her believers.

In 1937, an elderly Matt Warner, a former member of the Wild Bunch, scribbled a note to historian Charles Kelly: “Forget all the reports on Butch Cassidy, they are fake. There is no such man living as Butch Cassidy. His real name was Robert Parker, born and raised in Circle Valley, Utah, and killed in South America, he and a man by the name of Longwow [sic] we[re] killed in a soldier post their [sic] in a gun fight. This is straight.”

Recommended: The Last Outlaws: The Lives and Legends of Butch Cassidy and the Sundance Kid by Thom Hatch and Digging Up Butch and Sundance by Daniel Buck and Anne Meadows.