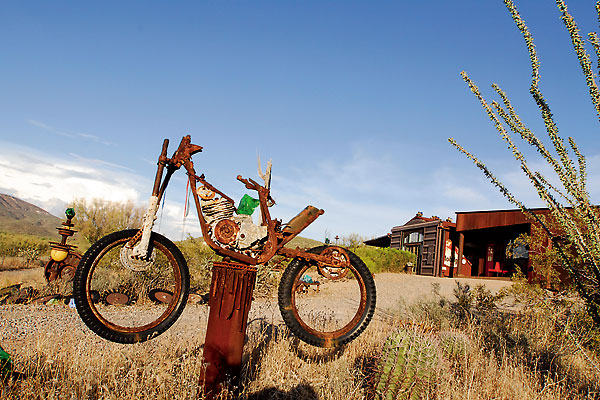 The design for Cactus Camp figuratively took shape on a bar napkin at the Roadrunner Bar in New River, Arizona.

Kit Carson (no relation to the mountain man) says he had inspiration from the work of great architects: Mary Colter, who designed all of Fred Harvey’s train stations and rock architecture on structures at the Grand Canyon, and Antonio Gaudí of Barcelona, Spain. In his imagination Carson drank beer with those “friends,” did some napkin sketches and voíla had an architectural plan for his home—a 3-D sculpture developed into a desert abode.

An art jewelry engraver by trade, Carson has an Art Nouveau influence in his work that blends well with Colter’s stone and native-inspired architecture of the Southwest and Gaudí’s Spanish sensitivity of “making things by hand,” which gives soul to the property.

In the architectural vernacular, Carson says his home and studio are “Eclectic Victorian Mining Camp.” A combination of structural materials, many of which he salvaged from junkyards or the desert itself, the home design resembles structures common in 1800s mining camps, like those whose remnants he saw as a kid growing up in Castle Hot Springs. The building of steel and concrete requires little or no maintenance.

“I brought this concept up to date with green building ideas,” Carson says. He incorporated 14-inch thick rastra foam block walls, radiant hot water floor heat generated from solar power, four-foot eves to provide shade and no large windows on the west side of the structure to provide for energy efficiencies. Interior walls have zero particle board or paint; instead pigment has been added directly to plaster for color.  At only 1,200 square feet, the home also leaves a small footprint on the land.

Carson has had a lifelong fascination with architecture that has taken him from Indian dwellings to Art Nouveau buildings in Europe, but he says when it was time to create a home and studio in Arizona, he wanted a location where he could have north facing windows that would provide him with a connection to the landscape.

The home is set on native volcanic stone, which anchors the structure to the desert. Repeat motifs include a corrugated steel edge, caterpillar tracks, tile, bolts and rebar that all “create a sense of rhythm for the eye to move through the design.” The four pillars that support the wide porch roof are rusty well casings. Another similar piece in the kitchen brings the outside design to the interior, in the same way Carson uses native stone on the house exterior and around the base of the kitchen counter bar.

To build his special place, Carson looked for land in the region from Patagonia to Wickenburg, eventually finding a small acreage adjacent to the Tonto National Forest, west of Cave Creek. “I looked for a long time to find acreage bordering the national forest, so I’ll always have that connection to the desert,” he says.

The sculptures Carson creates come from rusty objects he finds on ranches, in arroyos and junkyards from Santa Monica to Santa Fe. His sculptures decorate the outside of the home and studio, and also play a role in the interior design.

Carson’s wife Aryana Londir is a glass and textile artist, and she works in the other studio on the property. A common factor to the two artists’ studios is that they both have “rusty metal motif,” he says.

Cactus Camp is generally quiet, though Carson admits that tranquility is affected when he is “grinding on steel sculptures.” The home is also a good place for star gazing as nights are dark away from the city lights. During the day, the expansive view of the northern end of the Sonoran Desert merges with the central mountain range.

“People say they feel a sense of resolve here,” Carson says. “Everything works visually. It feels grounded, permanent and safe.”