The Monitor stage rolls out of Deadwood at seven in the morning. On the box is “Big Gene” Barnett handling the ribbons and next to him is the shotgun messenger Gale Hill. Inside the coach are messenger Eugene Smith and his captain, Scott Davis. A telegraph operator, Hugh O. Campbell, is also aboard and has been given permission to ride along to his new station at Jenney Stockade, which is 57 miles south of Deadwood.

Up ahead, outlaw “Red Cloud” Gouch spurs a stolen horse, riding to tip off his comrades the stage is on the way.

At Canyon Springs, 37 miles southwest of Deadwood,  the lone station attendant, William Miner, is out front when a man on horseback approaches and asks for a drink of water. Dismounting, the rider pulls a pistol and orders Miner to “throw up his hands,” which he does. Miner is rudely shoved towards the grain room, tied up and locked inside.

As The Monitor rolls up to the stage station, Gale Hill calls out for Miner but receives no answer. Jumping down off the box, Hill goes to the back of the stage to block the back wheels. As he turns to walk towards the barn to look for Miner, shots ring out.

Hill is hit in the left arm, but he jerks out his pistol and returns fire. Another bullet pierces his left lung, tearing a huge hole in his back. Hill staggers forward, firing into the dense smoke.

One of the robbers, believed to be Charley Carey, runs out from hiding and thrusts the muzzle of his pistol in Hill’s face and fires. Incredibly, the shot misses, although Hill later recalls, he “could feel the hot air on the the side of his neck as it came from the gun barrel.”

Another outlaw comes out from hiding, goes down on one knee and starts “pumping his Winchester for all he was worth.” Hill stumbles towards the corner of the stable and drops the bandit with one shot, before passing out.

The messengers inside the coach are returning fire, shooting from the door ports. A bullet grazes Smith’s head, stunning him and he slumps over with blood running down his face. Davis, also inside the coach, tells the telegraph operator they can’t hold the position and they need to find better cover. They both climb out on the side away from the station. Davis fires as he retreats, but Campbell has no weapon and he is hit and falls to his knees. More shots from the stable drop Campbell in the dust, killing him instantly.

Davis makes his way for a sturdy pine tree, and urges Big Gene to make a run for it on the stage, but as he yells this, one of the robbers runs out to grab the reins of the lead horses. Davis turns and fires, hitting the outlaw, who falls over backwards.

Gale Hill regains consciousness, crawls to the rear of the barn and pulls himself up to a window and puts another bullet in outlaw Frank McBride.

Another outlaw comes out and orders Big Gene off the coach, and then, using the stage driver as a shield, advances on Davis, yelling, “Surrender!”

“If you come an inch farther, I’ll kill you!” Davis replies.

Backing through the brush Davis makes his escape and starts running towards the nearest ranch, seven miles away.

The outlaws commandeer Smith and Barnett, put blindfolds on them and drive the stage towards a “copse of woods,” tieing their captives to the wheels as they begin attacking the safe with sledgehammers and a chisel. They are successful and remove the treasure, promise their two captives they will send help and disappear into the hills.

The fight is over, but the punishing ride of multiple posses sent out to avenge “the most heartless, as well as the bloodiest stage robbery ever perpetrated in the Black Hills,” has just begun. 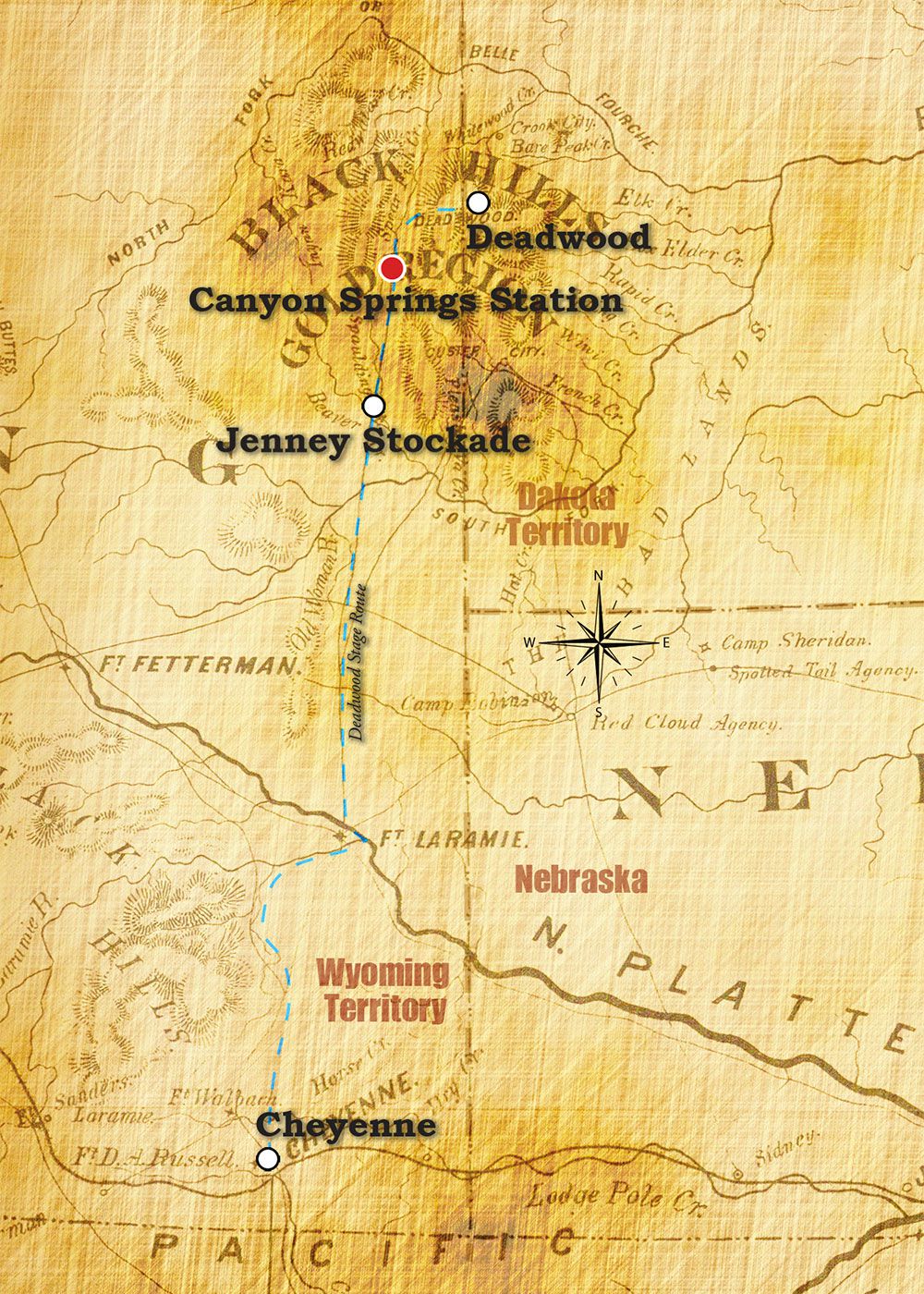 Luke Voorhees and his stage company contracted with A. D. Butler of Cheyenne to build two specially designed coaches with interiors lined with steel plates, five-sixteenths of an inch thick, capable of withstanding the heaviest charged rifle bullet. In spite of this precaution, the messenger guards inside were wounded while trying to shoot out the door windows.

The Treasure Coach (not the best name if you are worried about stage robbers) also called The Monitor (no doubt after the Civil War ironclad) made the run from Deadwood to Cheyenne with gold shipments and no passengers.

Normally, the driver blows a horn as the stage is approaching the station and the attendant has a fresh team ready to go.

Three relief messengers, including gunfighter Boone May, Bill Sample and Jesse Brown, were awaiting the arrival of The Monitor at the Beaver Creek stage station. When the stage had not arrived within a reasonable time, the three men jumped on horses and rode north to find out what had happened. Along the road they met Davis riding hell-bent for leather for help —he had borrowed a horse from Eager’s ranch. The four men then rode on north to the Canyon Springs Station where they found The Monitor standing abandoned with the treasure box emptied. They found Miner locked in the granary and the other employees tied to trees in the woods. Hill (Boone May’s cousin) died several years later from complications arising from the wounds he received.

Multiple posses take to the trail of the bandits who were believed to be six men, including Charles Carey, “Duck” Goodale, Frank McBride and Andy “Red Cloud” Gouch. Some believe “Big Nose George” Parrott and Al Spears were also in the gang.

Jack Gilmer, the head of the stage line talked Seth Bullock into coming out of retirement to organize a posse, which he did.

In multiple manhunts, going after all the outlaws in the Black Hills,  five were hanged by vigilantes, including Cornelius Donahue, AKA “Lame Johnny.” Additionally, two died from their wounds, four were convicted and sentenced to long prison terms and at least five escaped the country never to be seen again.