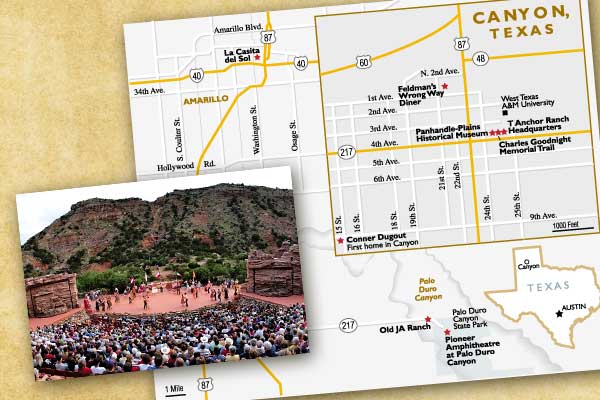 Chances are good you’ve seen Palo Duro Canyon, even if you have never been there.

Georgia O’Keeffe regularly visited the canyon when she was the head (and only instructor)  of the art department at West Texas State Normal College (now West Texas A&M University)  from 1916-18.

The canyon and surrounding area made a lasting impression on the young, Wisconsin-born artist,  who began painting bright, bold and semi-abstract landscapes.

So taken was O’Keeffe by the beautiful site that she sometimes walked the 12 miles from town to canyon rim. “[T]here is something wonderful about the bigness, the loneliness and the windiness of it all,” she once wrote.

Although casualties were few, the 1874 Battle of Palo Duro Canyon was the most significant conflict of the Red River War.  Just one soldier was wounded and three warriors were killed in the battle, which was really more of a series of skirmishes. But the losses of the winter food supply and more than 1,400 ponies soon led Southern Plains tribes to end hostilities.

Visitors to the Panhandle-Plains Historical Museum can tap out a message at the telegraph station, play poker at the saloon, weigh items at the mercantile or try on the shackles in the jail. Its recently rebuilt Pioneer Town consists of 26 buildings modeled after Panhandle businesses or homes between 1890-1910. The museum also holds the finest collection of Southwestern art between Fort Worth and Santa Fe.

The Spanish-style La Casita del Sol was built in 1926 and extensively renovated in 1999. You’ll find the cozy inn tucked within the Plemons-Eckle Historic District of Amarillo, about 20 miles north of Canyon.

The outsized musical drama Texas has been wowing audiences since 1966. The triumphs and struggles of Texas Panhandle pioneer life play out at the outdoor Pioneer Amphitheatre at Palo Duro Canyon every June through August.