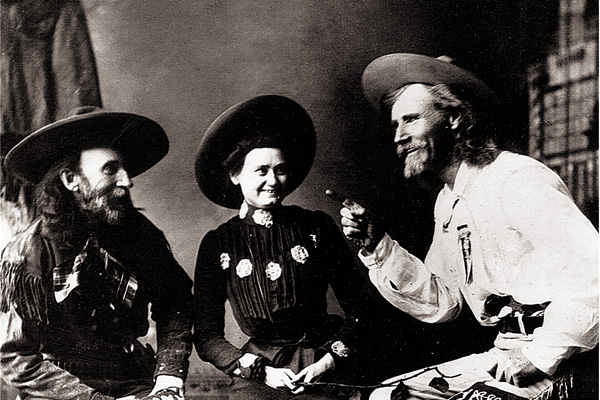 One of Crook’s veteran scouts, Captain Jack Crawford, who had recently been appointed chief of scouts for the Fifth Cavalry, had been sent in advance with Mills and was now preparing to enter the thick of the fighting.

September 9, 1876. The engagement with American Horse began and ended. The following day, Captain Jack Crawford and fellow scout Frank Gourard accompanied General Crook and his command south toward the northern Black Hills. Crook gave his official dispatches of the Slim Buttes fight to Gourard to forward to Fort Laramie, Wyoming Territory, almost 240 miles south of the Black Hills. Gourard was to deliver the dis-patches to the nearest telegraph wire, or take them to the nearest military camp just south of the Black Hills, and have them forwarded by fresh couriers.

Newspaper correspondent Reuben Davenport of the New York Herald gave his own dispatches of the fight to Gourard to carry with the official reports. Davenport then decided to ask Crawford to carry a second copy of his dispatches, with instructions for them to be wired immediately to his home paper. Further, he motivated Crawford to make the trip in haste, offering him $500 if his dispatches were wired before Gourards’ official correspondence. Because the Sioux were aggressively roaming the Black Hills, Mills was concerned that one rider would be unable to get the correspondences through to Fort Laramie. According to Crawford, Mills approved the plan of sending a “back up” copy.

The race to Fort Laramie was on. In an incredible horseback ride of over 340 miles from the Slim Buttes battlefield to Fort Laramie, Captain Jack Crawford covered the distance in only four days. Crawford delivered his dispatches and forwarded the first news of the Battle of Slim Buttes to the eastern newspapers, accomplishing one of the most hazardous horseback rides of any civilian scout in the Indian Wars. (He may have ridden two horses to death to accomplish this feat.) Frank Gourard’s dispatches also reached their destination. Assuming that Crawford had not actually received orders from Mills to make the dangerous ride, but had left the command in pursuit of personal gain, General Crook relieved Captain Jack of his scouting duties.

What makes this ride more remarkable is that Crawford was in Medicine Bow, Wyoming when he received word to join Crooks’ forces, which he finally chased down after riding hard for nearly two weeks. He then proceeded to finish the trek to Slim Buttes with Crook and Mills. In six weeks, scout Jack Crawford traveled nearly 1,200 miles on horseback across the most rugged terrain of the northern Plains. He accomplished this in hostile Indian country in the summer of 1876, and under the most strenuous circumstances, including coping with severe weather and little food.

After the Black Hills campaigns, Captain Jack traveled with Buffalo Bill Cody in his Scouts Combination acting troupe, replacing Texas Jack Omohundro, another former Plains scout and guide. Crawford would again return to the military in 1880 as a civilian scout with General Buell during the northern Mexico campaigns against the Apache, Victorio. This would lead to Victorio’s permanent relocation in New Mexico Territory.

After the scouting years, Crawford  published a number of books, including his first book of poetry and song, The Poet Scout, released in 1886. Always the entertainer, Jack traveled extensively throughout the United States, performing in live theater shows and giving public readings of his poetry. He became a popular lecturer with his Campfire and The Trail series, and was prominent in promoting the Grand Army of the Republic rehabilitation programs for veterans of the Civil War. During this period he tracked illegal liquor sales on Indian reservations across the country for the U.S. Government.

The end came quietly for Captain Jack in Woodhaven, Brooklyn, New York on February 28, 1917, just four days short of his 70th birthday. The old chief of scouts, Captain of the Black Hills Rangers, poet, actor, author, lecturer, and Union Civil War veteran was gone. Once again he joined  his old, departed scouting friends in their next great adventure.