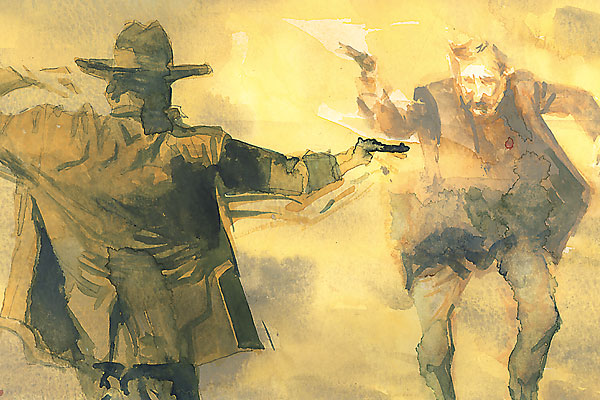 Bass Outlaw is drunk. This isn’t news. He’s been described by fellow Texas Ranger Alonzo Oden as “so kind . . . more sympathetic, more tender, more patient than all of us when necessary.” Except, Oden adds cryptically, “Bass couldn’t leave liquor alone, and when Bass was drunk, Bass was a maniac.”

While in El Paso to testify in court, Bass is in maniac mode at Tillie Howard’s Sporting House. Ruby, one of the girls, takes him by the hand and escorts him to her room. A few hours later, he emerges and appears “more tender.”

Bass goes out to Utah Street, where he meets Constable John Selman and Frank Collinson. After talking to them, Bass becomes angry and makes threats against U.S. Marshal Dick Ware. Selman tries talking Bass into going to his room to sober up.

Instead, Bass decides he wants an encore with sweet Ruby. To humor him, Selman and Collinson walk him back to Tillie’s and wait for him in the parlor, while Bass tries to rustle up a rematch. As Selman and Collinson talk, they hear a shot (one report says it came from the water closet). Selman smiles, then says to Collinson, “Bass has dropped his gun.”

As Selman leaves to investigate, Tillie herself bursts from her apartment, runs to the back of the building and blows a police whistle. Hearing the alarm, Bass Outlaw chases Tillie into the yard and attempts to take away her whistle.

Texas Ranger Joe McKidrict, who’s in town to testify before a federal grand jury, has heard the shot and now hears the whistle. He starts for the scene of the disturbance.

Selman steps onto Tillie’s back porch just as Ranger McKidrict enters the backyard.

“Bass, why did you shoot?” McKidrict demands.

Turning, Bass snarls, “You want some too?” as he pushes his pistol against McKidrict’s head and pulls the trigger. The bullet strikes the Ranger above the left ear. As he falls, Bass shoots him in the back.

Selman jumps from the porch, but before he can draw his weapon, Bass fires at the lawman’s face. The bullet just misses Selman’s ear and the gunpowder sears his eyes, all but blinding him. Falling backwards, Selman pulls his pistol and fires by instinct, his vision so impaired his target is a blur. Selman’s shot hits Bass just above the heart, tearing through his lung and emerging beneath his right shoulder.

Bass totters backwards, firing twice. One slug hits Selman above the right knee, the other rips through his thigh and severs an artery. Bass falls over a fence and then makes his way onto Utah Street where he surrenders to Texas Ranger Frank McMahon.

Sources indicate Bass Outlaw was his real name, although the late author Jim Browning found evidence his given name was Basil or Bazil, and Bass was a nickname (or a misspelling).

In 1885, Bass joined the Texas Rangers, Company E. In 1887, he was transferred to Company D. Although rapidly promoted to sergeant, he was compelled to resign for being drunk on duty at Alpine, Texas (see locator map, above). Later, he secured a deputy U.S. marshal appointment and was popular with the locals despite numerous run-ins with his superior, U.S. Marshal Dick Ware, who repeatedly threatened to force Bass’s resignation over his drinking. It’s possible Ware sent another deputy marshal into Bass’s territory to serve papers because he lacked faith in Bass’s sobriety.

On the day of the shoot-out, Bass is supposedly angry about the perceived slight and the money lost on those assignments. Will Burges, who is present when the gunfighter dies, maintains Bass was the “only man I ever saw who died in mortal terror.”

Severely wounded, Bass Outlaw was laid on the bar in the Barnum Show Saloon (see El Paso map). A doctor concluded nothing could be done for him. Transferred to a soiled dove’s bed in a back room, Bass died four hours later. As he convulsed in pain, he kept crying, “Oh, God, help!” And finally: “Where are my friends?” Nobody answered.

Texas Ranger Joe McKidrict died a few minutes after being shot. His real name was Joe Cooly, but he had changed it to keep his mother from knowing his whereabouts. He was about 30 years old.

John Selman was taken by carriage to Dr. Alward White, who diagnosed his wounds as nonfatal. After several weeks in bed, Selman recovered, but spent the rest of his days walking with a cane and he never fully recovered the use of his eyes. (Selman’s son said his father was night-blind thereafter.) Selman was tried for the Bass Outlaw shooting, but exonerated.

The “cathouse melee” shoot-out was unusual because it involved three lawmen, two of them killed. People in El Paso’s Tenderloin District behaved themselves for a while. No arrests were made for three weeks, a likely reaction to the killings.